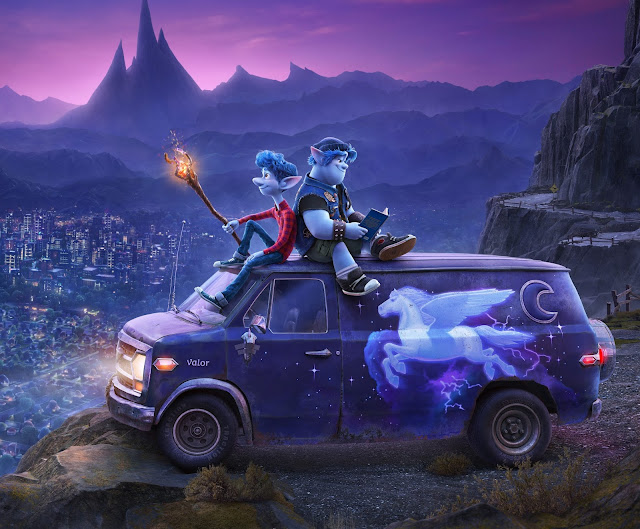 Hello, everyone. This is Arca, and this will be a review of the brand new animated film from Pixar, Onward. It only released in theaters a month ago, yet due to the virus, was put on Disney+ streaming last Friday. That would be probably 7-8 months ahead of schedule had the virus not happened. So I watched it with Onur and my mom late at night on Friday after seeing that it had appeared free to stream on Disney+. Here are my spoiler-free thoughts.

The basis of the movie is that it takes place in a fantasy-esque world that has moved on from magic and evolved into a more "modern" world, with cars, smartphones, and convenience stores. This is a pretty funny idea that allows many clever and legitimately laugh-out-loud jokes and gags to be used all throughout the movie. I know this is probably a controversial opinion, but I actually like the setup inherently better than that of the Disney Animation Studios film Zootopia (no, it's not a Pixar film). That's since anthropomorphic animals is such a worn-out trope, and while Zootopia was phenomenal, and used its premise cleverly as well, it wasn't as fresh as the premise to Onward.

The story follows two brothers, Ian and Barley Lightfoot (voiced by the MCU's Tom Holland and Chris Pratt, respectively) on a D&D-like "quest" on Ian's 16th birthday. His previously-deceased father has left them behind a gift of a magical relic that will allow them to bring him back to life for 24 hours to get to see how his sons turned out. Of course, this is a Pixar movie, so it is full of emotion and wit throughout, as expected. Still, while you have obviously heard by now that it's not an Up-level masterpiece, I expected it to be amazing and wasn't disappointed whatsoever.

So, what did I like about this movie? Let's get the less-significant but still amazing aspects of the film out of the way first. The animation is truly top-notch. After the hyper-photo-realistic backgrounds and textures we saw in Toy Story 4, I was still surprised at how that continued in this film. The trees and grass and landscape in the background were just as great in 4K UHD or probably otherwise, and the lighting and textures clearly communicate that unlike, say, an Illumination film, the animation is the opposite of cheap or lazy or uninspired. Characters are bursting with character. Subtle gags and jokes in the background are hilarious and portrayed well. The voice acting done by both Spider-Man and Star Lord (excuse me, Holland and Pratt) was great. Their relationship as brothers is well-communicated and their contrasting personalities (which actually get a surprisingly-meaningful explanation later in the film) interacted in ways that were always fun to watch.

The film had a consistently fun pace and tone, and its relic-hunting quest had about 1/10 of the convolutedness or frantic pacing as that of Rise of Skywalker (which means that it was slow enough). It was funny, fun, yet also consistently was able to be emotional. My little brother says he nearly cried four times in the film. That makes sense to me, even though I'm not one to cry in movies.

But by far the best thing about this movie, and why everyone stuck indoors as a family needs to get a free trial of Disney+ to watch it (even though just one month of it costs a dollar more than renting Onward, anyway), are the ways it conveys themes of what it means to be brothers. If the original Frozen was often cited as being "the sisterhood movie", then this is probably Disney's attempt to make "the movie for bros", and man, they've done it. I could get more in depth as to why this is the case, but then I'd be spoiling the ending. It's not anything particularly shocking, and is actually very obvious when you think about it (as the animation reviewer YouTuber CellSpex put it), but I think it makes a very concise and touching point as to the purpose of older brothers in the lives of younger brothers. Despite not living in a magical fantasy world where unicorns eat from dumpsters and goblins make workout videos, the theme felt quite personal to me (obviously, as a big brother myself).

To conclude, Pixar's Onward is already the best movie thus far of 2020 in my opinion (sorry, Sonic, even though I reviewed you last month with Xiang). It wins with its constant humor, cleverness, and emotional moments and beautiful message. It's the perfect fantastical escapism from the boring and sometimes anxiety-inducing world we're living in, and also had a few moments of "the sad state of modern tech-reliant society" reminders thrown in for good measure. I'd rate it a 95 out of 100, and it easily gets around a five stars from me. It may not be as "big" as some of Pixar's last few movies, but it sure was better than sequels (especially Toy Story 4, which while was quite good in some parts, disappointed me on my first viewing with its ending). Pixar's back to making new and original films, and animated films are going to be better off because of it. If their next few movies are as high-quality as this, it should tide over animation fans until 2022, when Spider-Verse's sequel releases (please be good, and don't mess it up like I heard online that you did with Spider-Man 3 and Amazing Spider-Man 1 and 2, Sony!).

Do yourself a favor, and just watch it. It's a new movie, it's a really good new movie, and best of all, you can watch it for absolute free with a free 7-day trial of Disney+, if you didn't already get a year free with Verizon near the premiere of The Mandalorian or just already had it. It's not like you'll be able to see it in theaters now, anyway. That's about it for this post, see you whenever I decide to make my next one! Stay safe and healthy, and keep chugging onward, my friends! I'd recommend you to check out this post, as well, if you haven't already, for a tale of something special that I made for my brother's birthday during the quarantine!: http://www.arcabaran.com/2020/03/trying-to-host-virtual-party-for-onurs.html And if you’ve already seen that, then check out my newest post, which I published 3 days after this review! http://www.arcabaran.com/2020/04/sony-just-revealed-ps5-controller-and.html Thanks for reading.