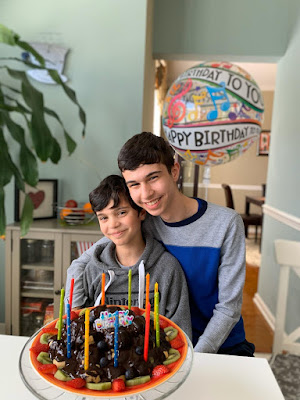 Before I start, I'd like to tell you all to please read the post about this on my little brother Onur's own blog, from his own point of view, since he talks about it in a much better way than I'll be able to explain in this post, and I won't talk about everything he mentions. It's very well-written and entertaining, and contains plenty of photos that he took himself (which, in fact, I'm reusing all throughout this post!): https://omegaonix.blogspot.com/2020/03/my-11th-birthday-special-edition-1-ft.html 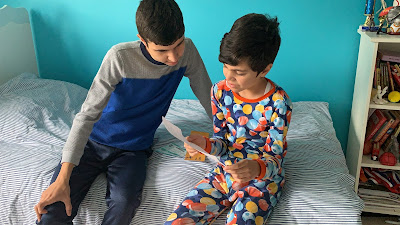 The coronavirus may have been able to take away (or delay for quite a bit) my little brother's planned retro arcade birthday party this year, but the greatest big brother in the world stepped up and dedicated hours to ensure that it would still be the best birthday day possible under the circumstances. For over a month, I had been preparing and planning for an ARG-like scavenger hunt for my little brother Onur around the house themed after Animal Crossing: New Horizons, a game which released the day before his birthday. Today, he turned 11 years old. I still remember the day that he came home and into my life for the first time (while he was born, I was in a McDonalds across the street with my grandparents). I remind myself all the time how lonely and boring my life would have been without his existence. I even might not have been named Arca if that were the case (I would be by default, named Onur, which was the name that my dad strongly wanted). To show him how much he meant to me and to still give him some joy and excitement while being locked indoors, I literally finished dinner more quickly certain days due to my excitement at preparing the scavenger hunt. The goal? I had already pre-ordered it nearly two months before, the very day it was announced: The special edition Animal Crossing-themed "version 2" Nintendo Switch console, which is a beauty that will never be produced again, got sold out hours after I successfully was only able to find it on Target, and made me deplete my entire treasury of money accrued after months of selling things on eBay. Also, it currently is being re-sold by scalpers at upwards of $500 or so, and I scored it for just $299 (the regular retail price if we could ever have nice things).

Today, I woke up particularly early (in fact, near when I would normally get out of bed to go to non-virtual school), at near 6:30 AM, due to my unusual early hunger for breakfast. Stomach rumbling and all, I got the prepared printouts, cards, and memory-filled photo printouts out of my desk's closet where I had been hiding them for a while. I made it an intricate activity where each room led to another and certain items (like custom fake Animal Crossing passports and plane tickets I generated with the help of a website), which all used knowledge of events in his life up to that point. It's really hard to explain it all to you. But basically, each "gate" number corresponded to a year of his existence. Gate 10 was last year, when he turned 10, and I wrote about activities that we did then. For Gate 6, I think I remember that I possibly wrote about The Force Awakens,  Shrek, and his first grade/my fifth grade (the only year that we'll ever, and have ever, shared a school together).

I even wrote an intro letter by Tom Nook himself, a businessman raccoon in the Animal Crossing games who is known for being a bit greedy and also forcing the player to repay a debt from the start of the games. I used a pretty convincing template and even added a little signature to the end, to make it more creative and authentic: 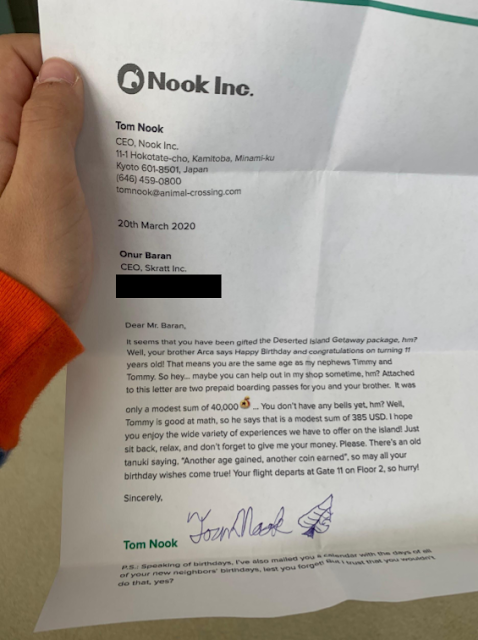 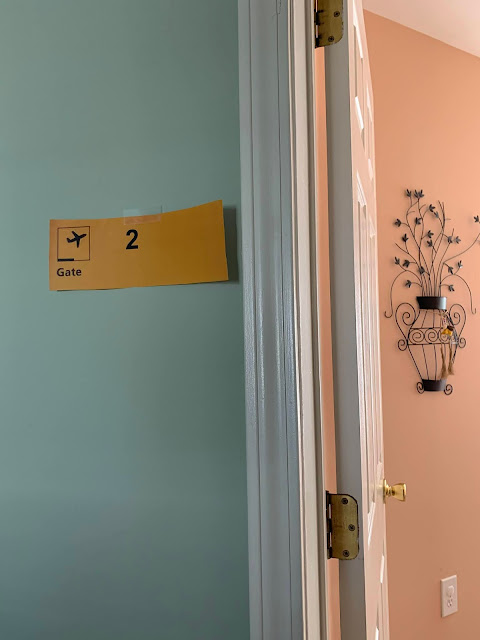 Anyways, I quickly taped each sign to the correct doors along with putting some hints in the right places (one was put behind a magnet for a place in Italy that we visited last year, called Cinque Terre, that was his favorite place from the trip, and ties into a clue about a souvenir from his favorite place in the place we visited in the year of the gate number... elaborate, I know. He's a very big fan of travel and is constantly researching about new places on his own for fun, so he is quite a bit bummed about this quarantine stuff). I don't think I can explain the whole thing better than he did, so again, if you haven't already... read his post, please!: https://omegaonix.blogspot.com/2020/03/my-11th-birthday-special-edition-1-ft.html 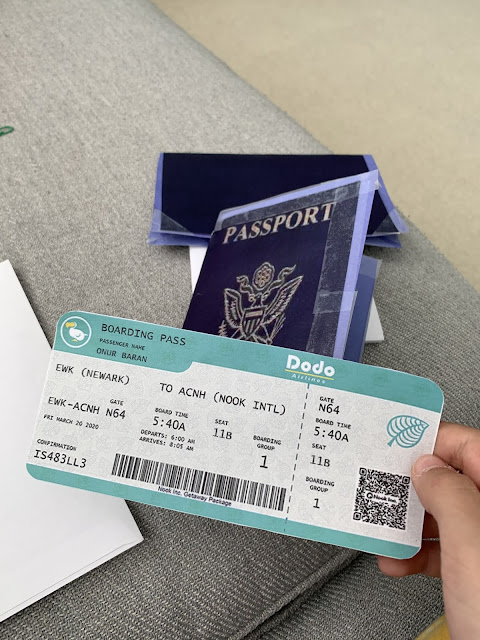 Above is a picture of the fake boarding pass I printed out for him. 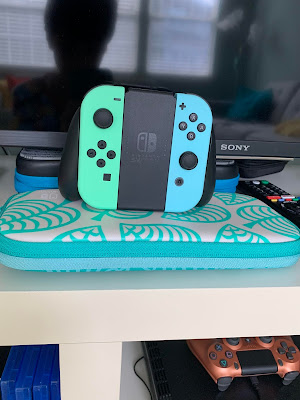 That is a picture of the epic victory royale he got as a surprise at the end of the scavenger hunt, the special edition Switch. This is a picture of its ocean-themed pastel Joy-Cons, as well as a thematic slim case. This is definitely the best-looking Switch that Nintendo has made so far, and may possibly ever make, so I'm glad that I purchased this and transferred all of my users, data, Miis, and games to it and will sell my old Switch on eBay for $250. The launch model is actually one with a different chipset with half the battery life of the newer one that can be more easily hacked, however, which gives it more resellability for those who are willing to risk getting their Nintendo accounts banned for emulation that can honestly be done much better anywhere else, and was always legally and morally questionable, anyways (just use Nintendo's Virtual Console or Switch Online, people). I am not one of those people, and I'd guess that the person who buys my old Switch will probably have just bought it as a way to save money and get a perfectly-functioning Switch to keep themselves busy during the quarantine. Besides, it's not like the inferior battery life matters if you're stuck indoors! 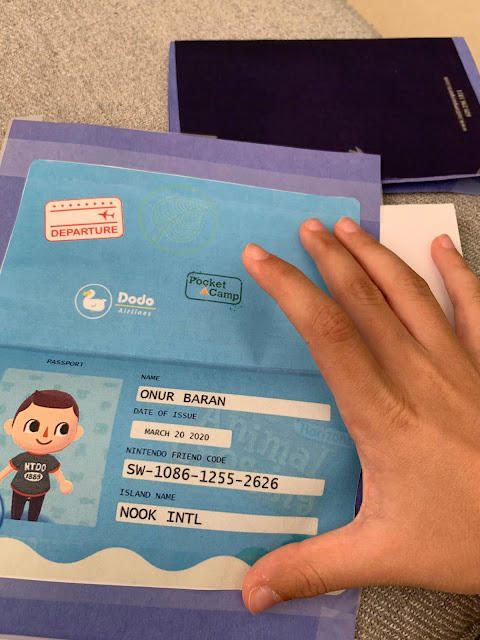 A nice photo of the passports, if I say so myself. Please don't send us friend requests if you're not one of Onur's friends, please, or you can expect to be rejected (oof). 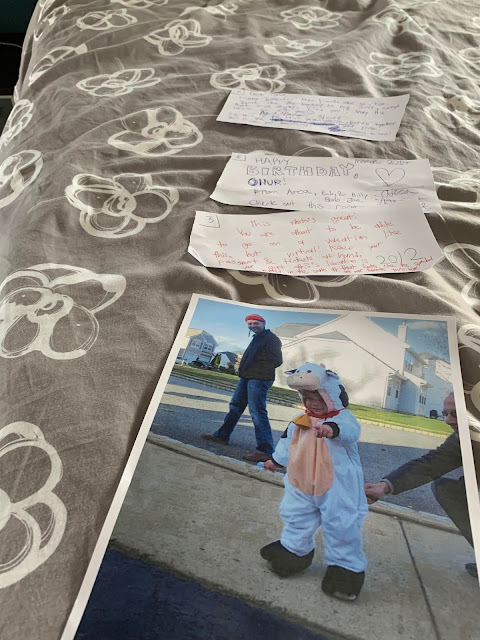 Above is a good photo to give you more of an in-depth idea of what the scavenger hunt was all about.

The special edition Switch surprised him greatly, especially since he didn't even know it existed prior to this. Don't you love gifts of something that you never knew was a thing in the first place? I haven't been able to have that feeling since I was very young, since typically my birthday presents and stuff are things I'd actually ask for due to knowing of their existence (like say, certain games or books or stuff). So yes, he instantly went "no way..." and jumped with excitement.

Anyways, now on to the thing that his blog post didn't address but I know more about myself... my attempt to host him a virtual birthday party for reasons of "social distancing" with all this virus stuff.

So I scheduled a YouTube livestream at 2 PM to share the link with all of my relatives in Turkey (over six different accounts got to watch), and this required us putting our laptop on the table at the perfect angle to capture us singing Happy Birthday in Turkish as to not get a copyright strike and blowing candles on top of a pile of chocolate delicious cream puffs with fruit that my awesome mom made as a birthday cake substitute (which is good, since my little brother almost never eats birthday cake, or cake in general, but he loved this). Not only that, but we FaceTime called our friends Ali and Burak from The AABO Show, requiring me to prop my phone up, and Onur Hangouts video called three of his friends using his laptop, also put on the table. So whenever I made a single move, it was reflected and echoed across three different screens. Onur and I felt like TV anchors for a while.

So you think we'd be able to just cut the cake (or cream puffs) and sing a song with our viewers and get it done with in a minute, right? Well, since COVID-19 is apparently affecting YouTube now, no. You see, our livestream got taken down by YouTube themselves three times while trying to make it. The first was for "copyright" after I sang the macarena (a bit ridiculous, but ok). The second was for no reason at all, but claimed it was "copyright". The last was since it got flagged for violating the community guidelines. What on earth, YouTube? I figured it could've been some COPPA thing, but I literally marked it as "for kids" that last time. Oh well, we didn't care and just recorded ourselves singing Happy Birthday while our friends and family tuned in and watched and sang with us, live. It was pretty fun, even if fifteen minutes straight were spent with technical difficulties.

A virtual birthday party, wow... the world has become crazy, am I right? So, you might be wondering, how does COVID-19 have anything to do with our streams being taken down midway for no reason repeatedly? No, it's probably not a troll flagging our videos (as I initially thought), but for this reason that I have photo proof for: 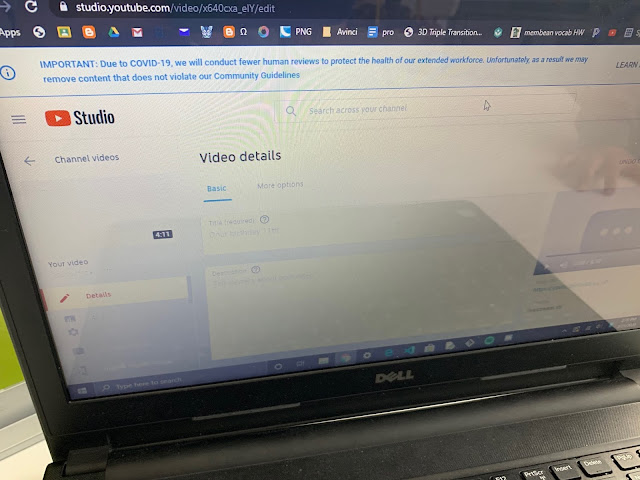 That's right. Due to a lack of staff to review certain videos, YouTube has stated that they may just randomly take down videos for no reason at all, even if they aren't breaking guidelines. Thankfully it doesn't seem like a channel can be given strikes (too many of which result in a ban and channel termination), but it seems that unless you're a top-notch popular YouTuber, your videos are currently not guaranteed to be uploaded without being taken down. So much for another thing for people everywhere to do while they're stuck indoors, and so much for literally all of the videomaking careers you've just put on hold, coronavirus.

Anyways, that marks the end of this post. Oh yeah, if you read Onur's post he mentions a balloon that my mom braved a local grocery store in a mask for (it was probably more empty than like Costco TBH) that got stuck in our neighbor's tree. Well, a breaking news update: Our parents managed to find a creative solution to getting it out! My dad spent 45 minutes duct-taping multiple short and skinny objects found in our garage together and collaborated with my mom to poke the balloon and pull without getting it to fly away. At last, they succeeded, and now we have another balloon back (and an unusually long, multi-item stick!). This is why we have such thing as family.

What do you guys think of this? Would you consider having a virtual birthday party for yourself or a loved one anytime soon? Doesn't that YouTube livestream stuff seem strange to you? Are you a lucky soul who has already gotten their hands on the new Animal Crossing game while mine is waiting to be shipped from Target (who promised a free game-themed journal with a pre-order if you brought in a printed receipt to their store, but my face-masked mom went yesterday and was told that it would have to be delivered instead fo rsome reason)? If so, what did you name your island? Can you give Onur and I any tips on what to name ours? Leave all of this in the comments below, and I'll see you in my post tomorrow! BBYYYYEEEEEE!!!