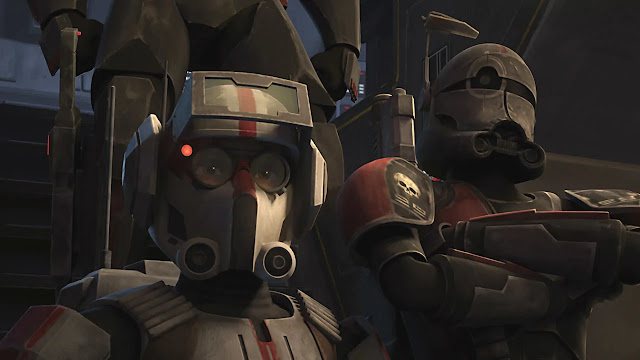 Before I get into the review part of this post, I'm going to talk about real life casually for a bit, since all the posts I make this month are meant to have something to do with  my everyday life. So yesterday, I went to coffee house and saw many great performances by many talented people. When I came back from the show, my brother and I gathered around the TV and booted up Disney+ since it was the release date of a brand new episode of the animated Star Wars: The Clone Wars's final season, Season 7. The show was initially cancelled on Cartoon Network back in 2014. The creators of the show had finished episodes waiting to be released past that, but they informed fans that sadly, they would never get released in their fully-animated form, outside of a few of them being visible on the Star Wars website as not-fully-rendered clips. Season 5 was thus, the end. They did, however, release some Netflix-exclusive episodes and called it Season 6, but they were not connected to the story of Ahsoka Tano whatsoever. But then, during a Comic-Con in 2018, a stadium full of excited fans were surprised with a trailer for, lo and behold, Season 7 of The Clone Wars in its fully-animated and glorious form! Anakin and Ahsoka were reunited, although no longer as Padawan and Jedi Master, and fans were told to wait a bit more until the release.

Then, when Disney+, Disney's big new streaming service, launched with a bang known as Baby Yoda and The Mandalorian live-action show, we were told that Season 7 of The Clone Wars would release in early 2020. The first episode of Season 7 was finally available on February 21st, with a new episode being added each Friday after that, just like the format of The Mandalorian's release schedule. I've gotten to watch each of the three episodes released thus far once, so this post will be my short thoughts about them as a whole.

Well, first off, I have to say that I noticed that these feel very short in comparison to most Clone Wars episodes. They're still about the same length, at about 20 minutes, but noticeably, the pacing seems to have changed a bit. It could be since less has happened plot-wise in each of them, so each feels like a short graphic novel chapter. Or it could be that since my Clone Wars viewings prior to this have consisted of only the "20 essentials" listed on the Disney+ home page and a few others, so I might be not that familiar with the pacing of the series overall, but even my little brother, who has been watching a ton of the show recently, pointed out the same thing.

Another thing, is that while the pacing may feel different to me personally (I bet for others out there they might not feel a difference at all), the quality or style of it hasn't changed whatsoever. The animation feels as good as ever, the storylines are just as exciting and in the same style, and the clones' personalities (even with the introduction of the "Bad Batch", genetically variant clones who actually look quite physically different and have a very different combat and strategic style and personalities than what we've seen so far) still feel very Clone Wars-like.

These three episodes, "The Bad Batch", "A Distance Echo", and "On the Wings of Keeradacks", are all part of the same arc. To try not to spoil much besides the basic premise, it starts with Anakin Skywalker being introduced to the Bad Batch. Then, during a mission, they hear a transmission that surprises them so much that they decide to investigate further at the end of the first episode. In the second episode, they get to the bottom of the transmission, and in the third, they must escape the battle-droid infested planet with that information.

Just like any good Clone Wars episodes (while these one's aren't particularly mind-blowing, but that isn't a bad thing), they are full of lore and character development that helps further flesh out characters and entities that the prequel trilogy of films otherwise failed to do properly. I saw the Star Wars YouTube reviewer "HelloGreedo" point out in his review of episode 1 that the show has had a history of taking concepts affecting the real world and using it in episode plots. This is true in this arc, which starts out with the Galactic Republic's clones learning that the enemy leaders of the Separatists have developed an artificially-intelligent computer algorithm to predict their every move. This, of course, plays off of real-world fears as to the growing capabilities of A.I. software to do some eerie things.

So, there's not much for me to say about these episodes that wouldn't spoil it for anyone who hasn't seen them yet, but as my verdict I'd say that (while it's hard to give them a score or anything like that without seeing the rest of the season) these are very solid and great episodes that are exciting and set up a very interesting mystery and plot. I can't wait to see where the story goes next, and if we're only 3 episodes in and CW seasons can be as long as twenty episodes (and according to IMDb, this season will have twelve total), I see plenty of potential to introduce a variety of different storylines like these. So we have continued with top-notch stories, characters, performances, and animation, so I think that's all I can really say about these three. I liked them quite a bit.

We know that, sometime later this season, Anakin will meet his former student Ahsoka Tano again. We also know that many of the events of this season will take place literally during the events of the film Episode III: Revenge of the Sith, so expect to see some tragic and heart-breaking recap of Order 66 except through the eyes of Rex, Ahsoka, and co. That alone will make this season absolutely worth watching for any Star Wars fan, regardless of whether or not they've seen that many Clone Wars episodes or not.

Anyways, that's it for now. What do you guys think of The Clone Wars in general? Have you ever watched it as a kid, and did you like it? Is it your favorite Star Wars content? Do you plan on watching these new ones, and if you already have seen them, what were your thoughts on them and did the three episodes thus far live up to your expectations? Leave all of this in the comments section down below, as I'd love to be able to start a dialogue with all of you.

This is Arca, signing off, and may the Force be with you all... always!