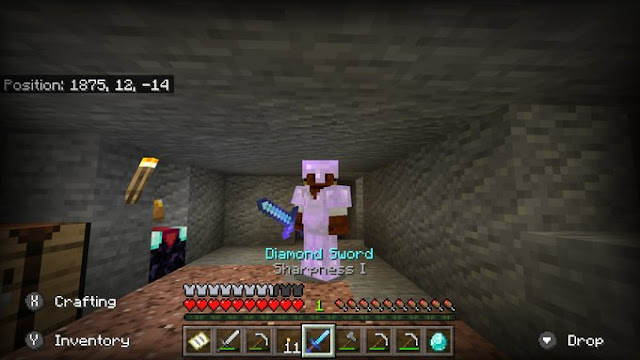 Hello guys, this is Arca, and as yet another last-minute blog post to almost wrap up March Blogging Madness, I will talk about what things I did today. So, I woke up in the morning at near 7:30 AM and ate breakfast at around 8:30 AM. Then, I played too much more Captain Toad: Treasure Tracker, beating Chapter 2 (which I thought would be the end), but nope, apparently there's a Chapter 3 now! I never expected to play so much of this game in only a matter of two days, but if there is indeed a Chapter 4 I don't think I'll be playing it. I'm not in a 100% completion mindset at all, I'm just trying my best to beat it efficiently. The game is not difficult... like, at all, even if some puzzles take longer than others if you mess up by falling off a ledge or not realizing that there's a goomba right behind you.

After I realized I should take a break already, I started to read my book instead. I am currently reading Warcross by Marie Lu, which I borrowed from a library a month or two ago and due to this quarantine stuff, was not required to return it yet. I got to the 150 page mark out of 350, even though I was hoping maybe to make it to the halfway mark today. Oh, well. I also was told by my mom to do some IXLs (using Onur's account and choosing Algebra II, since his school still uses it) to practice for the math concepts that I literally only learned one lesson on on Thursday, which was trigonometric ratios (alright, that part's not new, I've known that for a while), but with the addition of the 3 other non-SOHCAHTOA ones that are technically new to me. Kids, your mom knows best, so of course I finished two IXLs until I got near a score of 70 points (so around 15-20 questions each) before I forgot the exact sequence of events already, but somewhere along the line I ate lunch.

After lunch I continued reading my book, keeping my broken toe at an elevation at all times and wearing my foot brace while walking around so as to not let it swell with more blood (I am no doctor nor do I see it a future career for myself, but I know that that probably wouldn't help it heal as quickly). Oh, as I started writing (or, erm, typing) this paragraph, I realized I wasn't elevating my foot for a couple of minutes. Luckily, with my handy small blue baby chair at my side, this was fixed instantly. The reason I've been so sedentary today and the last couple of days is not because I am unhealthy or don't exercise, but again, because of my broken foot that I explained how I got in this post: http://www.arcabaran.com/2020/03/i-thought-i-broke-my-toe-my-reaction-to.html It looks like it's getting better and quite less purple now, so I hope it'll be over before or at least at the start of my spring break. If I can even remember when that is. I know I'm guaranteed no school until minimum mid-April, though, thanks to NJ Governor Murphy. One of my teachers said that being back by fourth quarter of the school year was "being optimistic", so we'll see.

Then, around 3 PM, I got to do the most exciting thing I've done all this weekend: Interact with one of my very closest and longtime friends who is also my neighbor. I FaceTime called him for nearly forty minutes straight and we talked about how each of our own schools were addressing virtual school. For him, he explained that the loneliness had gotten to him. But he also got done with his work insanely early, just like how I do. Since I couldn't go outside, at one point he went outside and walked in front of my basketball hoop and we talked while seeing each other through the window and he shot a ball into the basket and I got to see a first-person view of it from the video call on my phone. Video calling like that was pretty interesting, since it's not often that you would unironically FaceTime someone who is in your line of sight, but here we are. The world has turned upside down, I guess.

Anyways, I titled my post this since after that, we voice chatted through a phone call while playing Minecraft online together. Minecraft is actually such a great game to play together during quarantine since it's on every platform imaginable and isn't platform-locked in terms of multiplayer (with Java edition being an exception). He played on his iPad, and I played on my Switch in my room on my desk while I used a comfortable pro controller rather than using it handheld. I started a brand new survival world that was max-difficulty and we actually were quite successful and efficient. In just one 1.5-hour sitting, we had found nearly 10 diamonds, I had gotten an enchanted diamond sword and full enchanted iron armor by him knowing how to craft an enchantment table and a book to use it, and we found plenty of lapis lazuli to be able to enchant as well. I took a screenshot on my Switch of my armor and sword (blast and projectile projection, as well as Protection I; also Sharpness) in my mine and you can see it at the top of this post. I had an Admiral Ackbar skin that I just randomly felt like using from an original trilogy skin pack. We were mining together and crafting and exploring and fighting, and picking each other's items back up whenever one of us died and had to respawn was as expected, a fun and soothing experience. I love Minecraft, and honestl,y I missed being able to play it with a best friend. Luckily, I still can.

Oh, and here's a picture of a beautiful in-game sunset that I took shortly after Young exited playing the world: 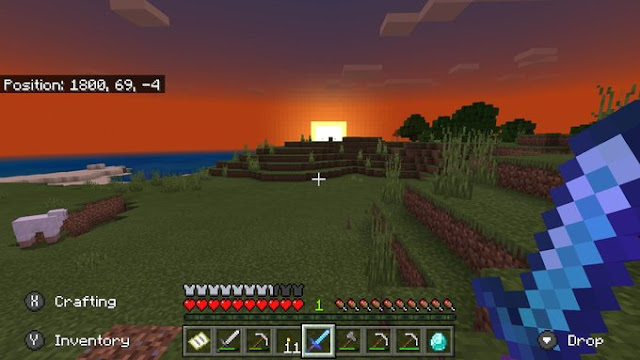 Wow. Minecraft can be better than real life sometimes.

Anyways, what did you guys do today? How are you interacting with your close friends during the quarantine? What games are you playing? How are you vid-calling? Zoom, Discord, Hangouts, FaceTime, Skype, or something else? Do you think you'll be able to handle this extended quarantine? Let me know in the comments below and I'll try to reply to you. For now, this is Arca, signing off. Stay healthy, safe, and informed, but also calm and peaceful, and may the Force be with you all. Here's to hoping that you find all the diamonds in the world <3 (That was unexpectedly wholesome, woah.)