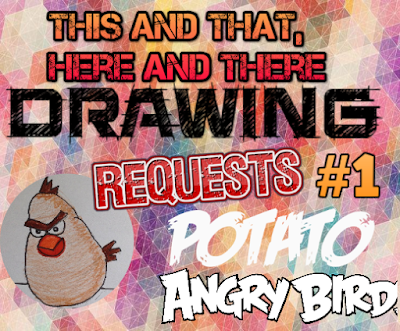 Hi, this is Arca! This is my post for today, the previous one was to make it up for not posting Saturday. I will be asking you guys to give me requests on what to draw, and I will draw it! There are some rules, though. If you do not follow these rules in your request, I will not accept it.

Here are the rules:

My first request was from "Cookie Caffine" (AKA Kimberly), who suggested that I draw an Angry Birds potato bird! Since I promised that I would do it, here it is: 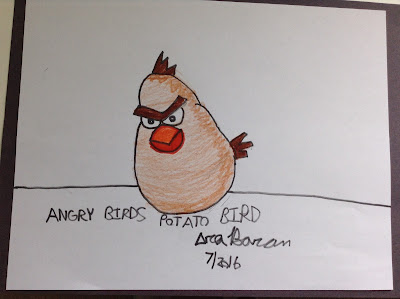 As you can see above, the Potato Bird obviously has the outline of a potato and is brown. The potato itself is mostly light brown, with darker shading on the outer parts. The head feathers are pointy and dark brown. The tail feathers are flat and dark brown. It has a beak with two shades of orange and is oval-shaped. His angry eyebrows are dark brown, and his eyes are right next to each other. Overall, I think the potato bird turned out to be surprisingly better than I expected.

I hope you enjoyed this post. In order to make a drawing request, write it down in the comments below (this requires a Google account). If you do not have a Google account, or just want your request to be private, use this Google form: http://goo.gl/forms/4rxegJaWH5xuH05M2

Here is my previous post, about Minecraft PE builds of the white and blue Angry Birds:
http://arcabaran.blogspot.com/2016/07/minecraft-pocket-edition-angry-birds.html