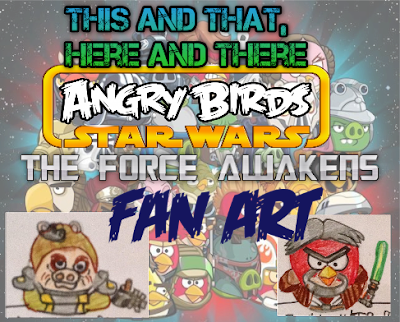 Hey, guys! This is Arca. I hope you have all had a happy Friday. Also,if Josh is reading this, I say hi! ( ͡° ͜ʖ ͡°)
According to the last poll (which not many people voted on compared to the other polls), the two Angry Birds Star Wars: The Force Awakens fan arts that you wanted me to do are Unkar Plutt Pig and old Luke Skywalker Bird. So without further ado, here they are! 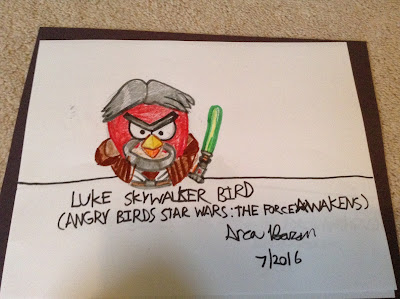 As you can see above, my drawing of Luke Skywalker Bird is very old and has grey hair and eyebrows. That is made to resemble what Luke looks like at the end of the movie The Force Awakens. He has the same iconic hair, although it is neater and less messy. He is the color red, of course. He has a grey moustache coming out of the sides of his beak, and a grey and white beard.

He has a brown hood coming out of the side of his face. His robes are mostly brown, with a white layer underneath. He has a light brown belt with a grey metal part, His classic Jedi Knight lightsaber has a part brown and silver hilt, with a glowing green blade. 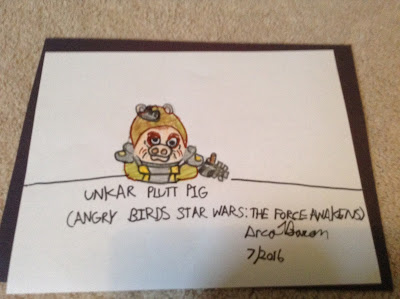 As shown above, my Unkar Plutt Pig is shaped a lot like a blobfish. He has a brownish-green helmet/hat thing, with two piggy ears coming out. There is a metal part at the side of  his hat. He kind of reminds me of the helmet pig from the original Angry Birds game.

His skin is peach-colored and his eyes have a brown outline. His snout is very droopy, and the shape if his mouth is too. His clothing consists of a brownish-green shirt and a grey and yellow metal apron with fasteners at the shoulders.  He is holding a random piece of junk with a tube and gear,

I hope you liked this post! Take a moment to vote on a Google+ survey about whatABSW fanart I should make to show on my blog next. The two options that receive the most votes by Sunday are the ones that I will make and show to you guys! Don't worry if the option you wanted doesn't get picked, I will put the remaining one in the next poll, as well as add new options. I have not been getting as much poll votes recently, so tell others to vote on it too! Remember that you must be signed in with a Google account to vote. Here is the poll:
https://plus.google.com/+ArcaBaran/posts/6ChzFiKjyya

Here was the previous ABSW fanart, about Poe Dameron Bird and Starkiller Base:
https://arcabaran.blogspot.com/2016/06/angry-birds-star-wars-force-awakens_28.html

Here is my previous post, a Minecraft PE build of the Red Angry Bird and diamond boots pixelart:
https://arcabaran.blogspot.com/2016/06/minecraft-pe-0150-builds-diamond-boots.html