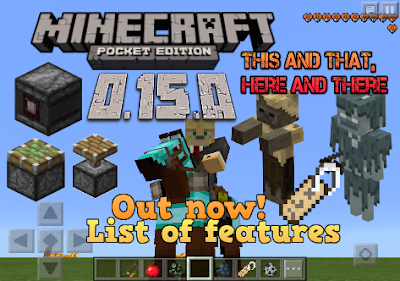 Hello everyone! This is Arva. This is my second post for today to make up for not posting Saturday. Here is a post you have been waiting for, for a long time: My review on Minecraft Pocket Edition 0.15.0! It is now available for iOS, Android, and Windows 10. This update has been out for over a month, but I didn't get a chance to make a post about it. I took some screenshots of all the new features. I will now show it to you guys! They finally added a mob that everyone has been demanding for then past 2 years. Now you can find a horse to feed, breed, tame, and ride into battle with! Horses can have horse armor added into an inventory made just for them. Here is how to ride a horse:
1. Feed it an apple.
2. Hold another item in your hand.
3. When the "Ride" button appears, tap it. 4. Once on the horse, quickly tap the "Inventory" button that pops up (not your inventory, the horse's inventory) and put in a saddle. Also horse armor if you want. Tap the "X" button. Now you are all set to ride! 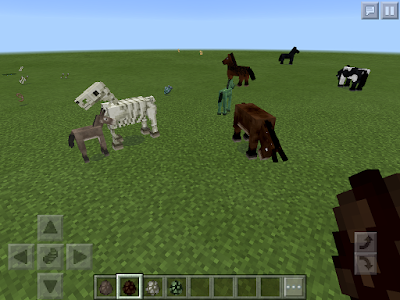 There are different types of horses that all look different! Mules and donkeys can be found naturally. But horses modeled after hostile mobs, such as skeleton horses and zombie horses, can only be spawned with a special spawn egg. 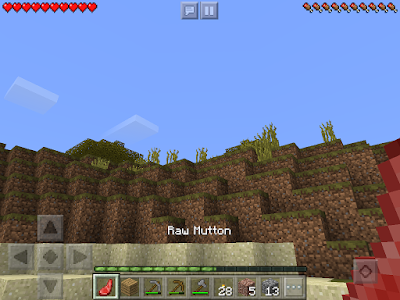 Now, after killing a sheep, you can get some food! Sheep now drop muttons, an edible item to regenerate your health. Pistons, a redstone machine block, have been added. A regular piston can push a block one space forward when activated, and the block will stay in the place it was pushed unless you change it. A sticky piston not only pushes the block when activated, but also pushes it to its original state once deactivated. Basically, the block sticks to sticky pistons. Observer blocks have also been added. This is a redstone block originally from the Minecraft PC 1.10 update. It has two holes on parallel sides, and can be placed like a log. Whenever a block update is detected directly a block in front of the bigger hole, it will activate a redstone signal. For example. you could make a door that only opens when a block is placed in front of an observer. You could do the same thing, instead with breaking a block. To learn more about the Observer block, go to this Minecraft Wiki page: http://minecraft.gamepedia.com/Observer They added the husk, which is also from Minecraft PC 1.10 update. It is a hostile mob that looks like a zombie, except it is brown. It has light colored robes. They are a variant of zombies that only spawn in desert biomes. They don't burn in sunlight! The stray is a variant of the skeleton only spawning in certain biomes, and it has also been added. They have blue robes and a hood, as well as completely white eyes that resemble that of Herobrine's. They burn in daylight, unless protected by water. They shoot tipped arrows with potion effects at you from their bow. They added tipped arrows, from 1.9 for the PC. When fired at someone, they will give them a certain potion effect. Lead was added, which can be used as a leash on animals to take them wherever you go, even flying into the sky! They added slime blocks, which you can bounce on top of like a trampoline.

Lastly, they added name tags. Just place one in an anvil, rename it to whatever you want, and use it on a mob to have letter appear above them! On July 27, I will make a post about tricks and easter eggs with nametags. Stay tuned!

Here is my previous post for today, about MCPE builds of the orange and pink Angry Birds:
http://arcabaran.blogspot.com/2016/07/minecraft-pe-angry-birds-builds-stella.html

I hope you enjoyed. Thanks for reading this and share it with others. Stay tuned for tomorrow's post and a post every day of the summer until August. I will see you next time. BBYYYYEEEEEEEEEE!!!!!