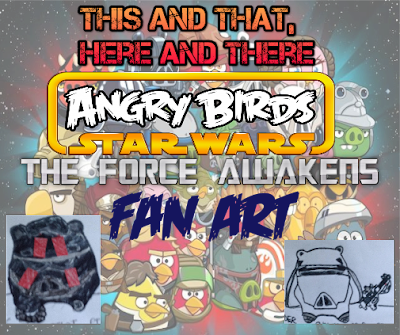 Hello, everyone! This is Arca. I am sorry for not posting on Saturday. I will make two posts tomorrow to make up for this. According to the last Google+ poll, (which not as many people voted on as other times), the two Angry Birds Star Wars: The Force Awakens are a First Order Snowtrooper Pig and Special Forces TIE Pilot Pig. So, without further ado, here they are! 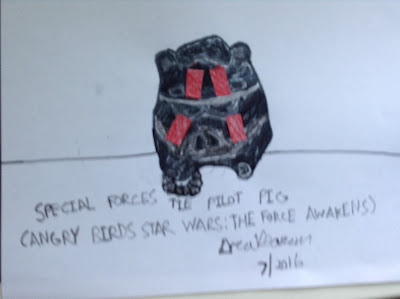 You can see my Special Forces TIE Pilot Pig above. The main thing that separates First Order Special Forces TIE Pilots with normal First Order TIE Pilots is that the special forces have red stripes on my helmet. I made a mistake and at first forgot to add them in, so I cut off the sticky side of a sticky note, colored it in red, and cut it into 4 equal parts to put on parts of the helmet. It is mostly black and gray. Its main features are outlined by grey. Its snout is connected by two grey stripes, and it has a metal circle on the bottom right side with a breathing tube connecting two parts of the left side. It has a grey stripe above its eyeholes. Its ears are grey on the inside. I admit that this came out a bit more sloppy than the other ones I have done so far. 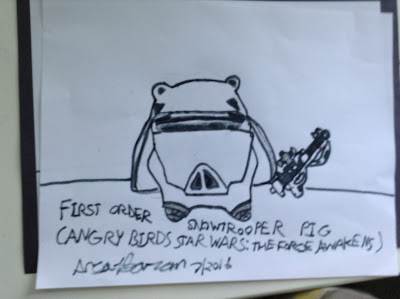 My First Order Snowtrooper Pig (shown above) has a grey, thin, and singular line acting as his eyehole, similar to the Flametrooper I did before. There is another thin black line above, with its eyebrows on it, There are two black triangles on the head dome. It connects to a part that looks like the back part of Darth Vader's helmet. The entire drawing only uses the colors white, grey, and black (with a small bit of red on the blaster). Its snout is triangular, on top of a part thicker than the rest. The bottom is a bit strangely shaped, with two metal circles on the left and right bottom corners. Its blaster is the signature First Order blaster, except it is a bit smaller and had some details missing. The tip of the blaster has piggy ears. (BONUS: See if you can find the color red! Hint: It is on the blaster.)

I hope you liked this post! Take a moment to vote on a Google+ survey about what ABSW fanart I should make to show on my blog next. The two options that receive the most votes by Thursday are the ones that I will make and show to you guys! Don't worry if the option you wanted doesn't get picked, I will put the remaining one in the next poll, as well as add new options. I have not been getting as much poll votes recently, so tell others to vote on it too! Remember that you must be signed in with a Google account to vote. Here is the poll:
https://plus.google.com/+ArcaBaran/posts/Lvho1rvdQbJ

Here is my previous post, about the release date of two Gravity Falls books, including the real life Journal 3:
http://arcabaran.blogspot.com/2016/07/two-new-gravity-falls-books-coming-near.html