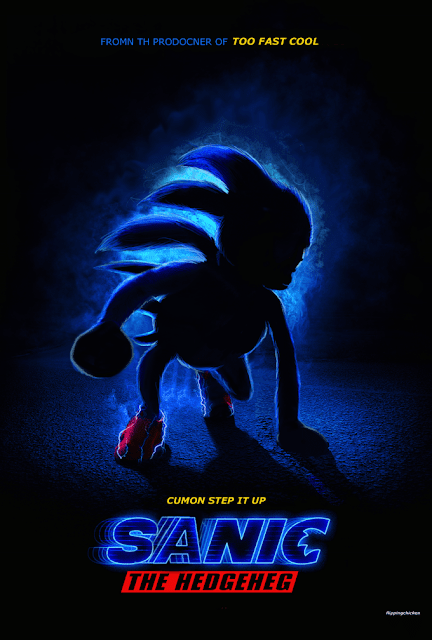 When the trailer for this film released a year ago, the reaction was almost instantly negative. What was this abomination of a creature they called “Sonic”? The only good thing about the trailer was Jim Carrey, one of the best comedic actors ever, even being in it. But then, after months of delays trying to “fix the design”, we got to a Valentine’s Day release date. I watched the movie together with Xiang after the coronavirus scare near my town got confirmed negative at first (so at the start of March), and here are our thoughts.

Is this a videogame adaptation to rival Detective Pikachu, or is it more like the 90s infamous Super Mario Bros.? Read to find out whether you should go into a packed theater full of unsanitary children and risk coronavirus to watch a movie about a fast blue hedgehog in semi-CGI live action (because that’s how I felt this was, for the most part). I’d rate it an overall 83/100. It was pretty average. It was entertaining, some scenes were legitimately funny (like a Sanic reference), but not much memorable really happened. Sure, you had Jim Carrey carrying this movie, but the rest of the actors were pretty weak overall (except for Sonic’s voice actor, who was pretty okayish to good).

Overall Movie Rating:
I thought the movie, overall, was really ok. It wasn’t bad, but it wasn’t great either. The ratings for the movie were generally pretty good, but that doesn’t mean it’s worth watching. Not gonna lie, I recommend that you just watch the movie on Netflix or some pirated website when you have nothing to do and just feel like binge watching random furries. There was nothing spicy about the movie, just your average, cliche storyline. It’s not even worth watching for the memes. Don’t waste your time on it. I give the movie a rating of 69/100. Btw good video:  https://www.youtube.com/watch?v=pJfEpJhwtDU

[TTHT does not support or encouraging pirating.]

For meme movies, between “Emoji Movie” (thankfully I haven’t seen that cursed pile of garbage), and Shrek, this is obviously between them but except Shrek is actually very good as a movie, so they’re not even worth being in the same sentence. I think I’ve just commited heresy.

Yeah, the storyline wasn’t that great. I mean, it’s your typical “buddy movie” about a CGI character who comes to earth and gets pursued a lot but has to bond with a human… even though he could have just run across the country at superspeed instead of wasting 2 hours of screen time being a lazy bum!

I agree, it probably isn’t worth risking getting infected just to see this. You could probably wait till the Netflix release (which it will inevitably end up on, probably quite soon). The design may have been improved to the point it sometimes looks like Sonic, but it still can be uncomfortable, like a movie about furries. Hey, it does have a particular post-credits scene that kinda has to do with… nevermind, that’s a spoiler.

Ok, so basically I don’t think so, because the CGI was overall worse and Ryan Reynolds as Pikachu is just funnier than Jim Carrey as Eggman. I’m sorry, but maybe because Jim Carrey is so perfect for the role, yet no one would assume that Deadpool would voice a cute little Pikachu.
Do you think that this movie was better or worse than Detective Pikachu, Xiang?
The movie was better than Detective Pikachu because Sonic is thicker than poop soup.

The Sonic Movie had some good Jim Carrey humor and a better design, but it didn’t save it from being painfully average. I just remembered that at the end of my Detective Pikachu review (http://www.arcabaran.com/2019/05/pokemon-detective-pikachu-movie-review.html), I referenced this movie being a step in the wrong direction for video game adaptation movies. I said this:

“But wait a minute… I see something blue in the distance. It’s speeding past faster than the speed of sound. Now, it's slowing down. I think he finally has gloves now. And he's holding a sign that reads "Delayed 'till 2020 for better VFX!"
This is Arca. My power went out a few hours ago. All I remember was a flash of blue, and someone screaming out “GOTTA GO FAST”. I also distinctly remember that all the speakers in my home were blaring out Coolio’s “Gangsta’s Paradise”. Oh well, just a nightmare. Hopefully, it doesn’t become true… Because otherwise, the future isn’t bright, it’s blue.”

Basically, I think videogame adaptations, as far as the family-friendly ones, may never be good because they pander too much to little children and thus don’t have a good plot, or many memorable aspects. Basically, they turned one of the most iconic gaming mascots into a Minion. I can’t say I’m surprised, as that’s the state of the movie business, but I can’t say it’s not that disappointing.

Ok, so that sums it up for this post. What do you guys think if you watched the movie? Is it better than DP? Are video game adaptations ever going to be great? Leave it in the comments.

This is Arca signing off.

P.S.: If you haven't already, read Xiang's first post as a new collaborator on my blog: http://www.arcabaran.com/2020/03/the-new-collaborator-by-collaborator.html