Seeing my Blog Logo's Font in Other Places...

Well, today was my fourth day of virtual school, and it overall wasn't as great as the other days, mostly since I had some tests/quizzes to do. But overall, I still got done with everything far earlier. I maintain my opinion that I like it better than going to school. I think an adequate analogy, for those who still can't understand my reasoning, is this: Virtual school is like "diet school". It does all the essential things and has all the essential things to still be fundamentally "school" but without a lot of the bad stuff. Of course, being cut down to this state may deter many people from enjoying it and may prefer the non-diet version, but for others who take a look at the overall packaging and read the ingredients, they realize that it is much better for them (in this case mentally rather than physically, although also physically because home lunch is quite fresher than school lunch).

Anyways, while I wait off the hype for Animal Crossing: New Horizons (which is releasing tomorrow, but my pre-order likely won't arrive until a few days later, due to coronavirus, but I don't mind), I decided to make a post about a topic that I wanted to joke about at some point, but not necessarily make an entire blog post over. But since this seemed like such a good idea the further I dug into it, I'm doing to make an entire blog post about yes, my blog's iconic logo font, which I have used since around 2014. It isn't like Comic Sans, where everyone knows it and either loves it or hates it, but it is still a relatively common font nonetheless.

How did I choose the font for my blog's logo? Well, back in the fourth grade, my friends in accelerated ELA (English Language Arts), as well as REACH (just another acronym for G&T), thought it was the coolest thing in the world to use generated text images from sites like CoolText.com and FlamingText.com, but particularly the former. I first remember seeing it in a Google Slides presentation project on different types of food around the world or something like that, and the teacher commented on the cool fonts for slide titles. Of course, they weren't particularly mind-blowing, but they were obviously not from the arsenal provided by Google Slides or Docs... man, the fact that I can even remember how much I cared about this (that was the year Google Classroom launched, by the way), shows how much different that the times were back then. Much simpler.

So, when I found out that some kid discovered the site who told another kid who told another kid and then eventually the secret came out, of course I went straight to CoolText.com and said, "I'll take your entire stock!" It wasn't long before what is literally the second or third font that you see on their homepage (which the site labels "Skate") became the font that I chose for my blog's long-kept logo image. It looks like this:

Now you get the font I'm talking about, right? That same font is the font I've pretty consistently kept on my blog for almost six years, although I have occasionally switched the colors from my green and bleu color-scheme (currently I made it more beachy and Animal Crossing-themed, specifically after what I'm pretty sure are the colors on the special edition Joy-Cons), and sometimes to other fonts altogether, but never for too long. A few days ago, in fact, I made it all-green (technically two-toned, but only by slight) for St. Patrick's Day, because why not.

Of course I am not the only person to have used that font, ever. I didn't invent it or anything, and it's available for anyone to use. I have seen it ocassionally in other places and such, but the first documented example of it I have is in a public library somewhere in my state: 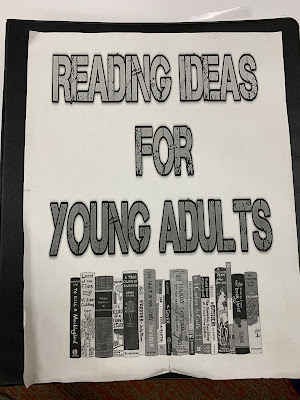 Ok, so that's clearly the same font, even though the border widths may be slightly different and its clearly a bit compressed due to whoever made this flyer resizing it on whatever word processor they were using. Ok, so a public library using the font isn't surprising. But you know what is surprising? Yesterday, I found out that ironically and somehow perfectly, Lucasfilm used the font in something Star Wars-related!... or the people working for the collectible website that this was found in, which is more likely than Lucasfilm themselves just sticking this font there. You can see it below:

Look at that... "The Mandalorian and the Child", spelled out clearly in the same font as my blog logo. This was on the Sideshow Collectibles website, after I landed there through scrolling through Reddit. Don't believe me? It's not Photoshopped by me, I promise, it's right at this link: https://www.sideshow.com/collectibles/star-wars-the-mandalorian-and-the-child-hot-toys-906135

So what is the real name of this font, and what are its origins? It was quite easy to find this, and much easier than I expected. It was named right there on Cool Text's logo design page for it, and we can clearly see that the true name of the font itself (without the stylistic defaults put on it by Cool Text), is "Capture It".

After a quick Google Images search, I find that Capture It is a font created by someone named Koczman Bálint, or at least according to this image below: 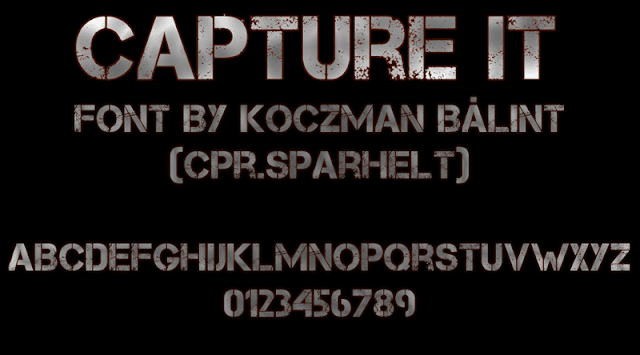 So, I did some further digging, and found that Koczman Bálint is a name also mentioned across numerous other font generator websites as a category, and even with stuff like "Fonts by Koczman Bálint", so that means that this guy has also made other fonts. He is (or was, but probably is) a graphic designer who has made multiple free fonts, is an inference that I can make based on this. Apparently, a quick Google search shows that his (or her, but I can't tell) last name is either Anglo-Saxon in origin or Hungarian, the latter of which is more in line with what I would have thought. Another Google search to try to figure out the gender of the name tells me that the name is Welsh, meaning something along the lines of "sorcerer", and is unisex... actually, no Google search autocorrect made me search "Morgan". I couldn't find the first name on any of the first page of results, so I was unable to deduce its gender or ethnic origin.

Curious, I try to learn more about this guy, but I can't find a profile for him on Linkedin or Twitter. I find someone on Facebook with the same name as him, but I am unable to deduce whether its the same graphic designer or some other Hungarian person. Google Translate tells me that the person's posts are in Hungarian, and the person's profile pictures are all male, so there's that. But for a graphic designer who has made multiple pretty commonly-used fonts that you see in a lot of places, isn't that kind of underexposing one's career? Then again, I am overthinking this way too much and I only started looking up all this weird information because I was bored out of my mind and needed to complete my daily blog post while still having fun.

Anyways, what have I learned? Literally nothing, other than the fact that the name of my blog's logo fontis actually "Capture It", not Skate, and that it was probably made by some Hungarian guy with a cool name who also made multiple other fonts before (possibly for a living). That's not too bad of a way to kill boredom indoors during this quarantine business, which is surprising.

Anyways, what do you guys think? Have you seen the Capture It font being used in any other places? Would you mind to put links to pictures if you have any? Do you think that the story of me trying to find out the origins of the font was interesting? Do you think I should research any further and waste my time (the answer is no, obviously)? Leave it all in the comments below.

Oh, I need a conclusion statement for this "essay". Here goes: In conclusion, while the Capture It font may have a pretty boring story behind it, it isn't as much of a burden to humankind as Comic Sans is. This is Arca, signing off. Have a good one, and stay safe and healthy. Don't forget to wash your hands.