Fallout Shelter is the REAL "most accurate" quarantine game 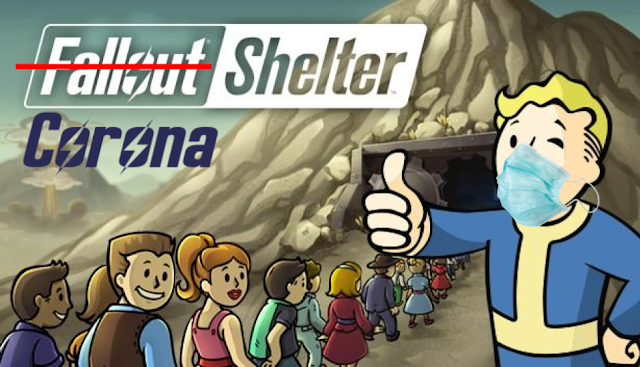 Background Image Credit: Bethesda, but collage done by me

Just two days ago, I made a list of relaxing games to take your mind off the quarantine (you can read that here: http://www.arcabaran.com/2020/03/actually-this-is-bad.html). I forgot to mention one obvious one: Stardew Valley, a $15 game also available on PC, Mobile, Xbox One and PS4, about farming and living life in a peaceful, high-quality pixel-art-style village. That is just about a complete masterpiece of a game no matter the platform (even though mobile, while cheaper, lacks online multiplayer co-op) which share something in common with the games on that list from that post: It's about what people wish they could be doing in real life right now, but due to global health pandemics that let me finish all my work today prior to 1 PM (yay!), just can't.

But as for Fallout Shelter, a free-to-play mobile game also available on every platform including Switch?  Other than the fact that it is unironically better than Fallout 76 (which wasn't a very difficult task to do, thanks, Todd Howard), it is still relaxing... but unlike the other games, is actually about what life would be like if the current situation got worse rather than better.

What is Fallout Shelter, exactly? A simple 2D simulation town-builder type game where you are the overseer to a your very own "Fallout Shelter" from Vault-Tec, which houses hundreds of people wanting to isolate themselves from the outdoors (which, according to Fallout game series tradition, is now a complete wasteland due to nuclear war... not because of a global retrovirus). It lacks any of the mature content of the actual Fallout games in its transition to becoming a true mobile game phenomenon for even your five-year-old little cousin on a tablet to enjoy.

It seems simple; you're given a certain amount of money, and start out with some residents all in Vault Boy's 1950s American cartoon artstyle. You can use this money to build certain rooms in the underground bunker dedicated to certain asks, like purifying the water or generating electricity. There are also lounge rooms, restaurants, and elevators to access lower floors. Each of these tasks can only be done if you assign by dragging and dropping certain residents into payless-servitude to the rooms. You're trying to keep the overall happiness level of your residents high (it's displayed as a percentage at all times, the last time I checked, on the app on my phone the happiness was literally 37%), but also not run out of food, water, or electricity.

There's no specific goals other than to try to create the perfect vault by using resources wisely. You can send out residents on "quests" in the outdoors to hunt with pets, look for resources, and more to "level up". There's actually a lot of complexity behind it and it's quite difficult to be successful, sort of like other simulation life games like Animal Crossing or Stardew Valley. Just set in a post-apacolyptic wasteland where instead of building beach houses and farming crops, you're digging underground to make a giant bunker full of people living in unsanitary conditions and being forced into servitude to survive. Rat infestations and fires can start randomly at any given moment, which require people to be assigned to in order to fight. Also, if a resident dies fighting a fire or out on a quest, don't worry, you can invite more into your vault or let couples in your vault have children. It's quite an instant process though, so don't worry, that's not difficult. What is difficult is realizing that now that you have another resident, you have to dedicate more resources to them, so therefore the amount of manpower you have is somewhat evened out by the need to provide more... You get the idea.

Need something to do? Are you a pessimist? Watched too many doomsday movies, played too many doomsday games, and read too many doomsday books (the hypothetical-future kind, not the historical one)? Then you owe yourself to give this simple game a try. It's perfect to just open every once in a while for 30 seconds, change something or upgrade a room with a tap, and then close. It's free to play, is on literally every platform imaginable (even very old laptops and smartphones can play it), and will put your resource-managing and decision-making skills to the test.

So what do you guys think of this? Does the game sound appealing to you? Would you be any good at it (I'm quite terrible at it, due to those constant roach infestations that always happen whenever I send the highest-level person out on a quest!)? Is that glass half-full or half-empty? Leave all of this in the comments below, I'd love to be able to start a conversation with you.

See you guys in my next post. Stay healthy and wash your hands. Good luck to us all. This is Arca signing off. Have a good one.