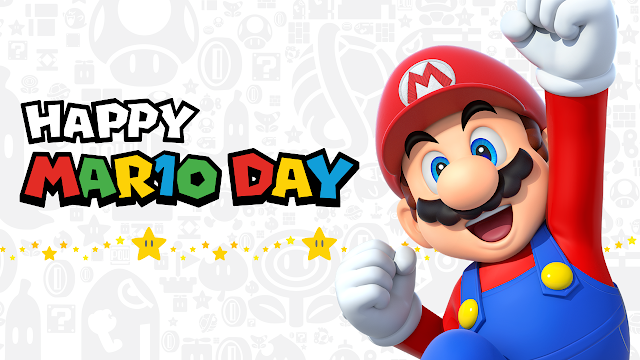 The coronavirus continues to dominate the conversation just about everywhere, from the first confirmed case being found in Turkey to several cases in the very county where my high school is located and even being mocked on Saturday Night Live. But, are you prepared to put all of that aside to celebrate everyone's favorite fictional plumber (not including Luigi)? I knew you would say yes!

Videogames at their best, just like any form of entertainment, are great escapism. I can escape the constant aching of all my body's joints causing me great difficulty even bringing my books up a flight of stairs (thanks, home town tennis tryouts yesterday-- just like that piano evaluation, literally every single other Edublog was talking about it at the same exact day of the month like it's some sort of physiological body pattern), to grab two joysticks and some buttons and let a red-hatted mustachioed man run, jump, step on really big turtles, or be an absolute boss at kart-racing. Also to break every single known driving law known to man including throwing empty turtle shells at car-driving gorillas and reptiles and not wearing a seatbelt, ever. Or, to keep on rescusing the same exact princess who keeps on being kidnapped by the same exact giant lizard by using anything from fire-resistant gloves to gardening tools to sentient articles of clothing. No, it's not the hallucination you had in your dentist's office while removing a molar last Tuesday, it's Super Mario!

Just as Star Wars fans have their punny holiday of "May the Fourth be With You" on May 4th, Nintendo has since (starting in 2016), designated March 10th of the year as "Mario Day". Why? Because if you write it like MAR10 (March 10th), it looks like MARIO. What does that mean, other than constant marketing? Well, guess what? Constant marketing, but also some epic sales.

Just about every single good Mario game on the Switch and/or 3DS is being sold at a decent discount for a couple of days. Most major retailers in the U.S. (Best Buy, GameStop, you name 'em, but no, not Dick's Sporting Goods), as well as Amazon and the Nintendo eShop (in case you don't feel like leaving your home and potentially contracting COVID-19 while trying to search the aisles for a copy of Mario & Sonic at the (potentially cancelled) Olympic Games Tokyo 2020).

To run a list of the best deals I could find, as well as my own personal recommendations for those of you looking to play more Mario without spending as much money, the rest of the post will list them. Not all of them, you can find a more complete list here (https://www.theverge.com/good-deals/2020/3/10/21171517/mario-day-nintendo-switch-deals-games-digital-best-buy-gamestop-target), but expect like my top five or so to be listed here.

Super Mario Odyssey has been reduced to $45 from $60. This game is a masterpiece and the second-best game on the Switch. It is what 3D platforming and Mario should be, and is a classic Nintendo display of creativity, fun, accessibility, and a great visual style. I got it the month it came out back in October 2017 for quite a bit more than this, so rest assured that at this price, it's worth finally playing if you haven't already done so.

Mario+Rabbids: Kingdom Battle is normally $60, but you can easily find it for $15 regularly, so now is no exception. It is in my opinion, an often-overlooked gem. The title and concept may sound weird at first, but basically imagine RPG chess with Mario characters. I normally am not a fan of RPGS whatosoever, but this is like the XCOM games in that you move characters around a 3D board space and attack with lots of strategy. Even if you don't like chess (like me), you will love this game and spend lots of time with it. Especially since it's much more difficult than its inclusion of Rabbids may have you believe.

Super Mario Party is down to $40 from $60 dollars, and it is one of the absolute best party games on the Switch. It returns to the traditional format of a board game with separate players (no more frustrating car mechanic like in the past few entries, which I never played but have heard many online complaints about). Even if you don't like the friendship-crushing board game format, there's a brand new mode that my friends and I return to a lot called "River Survival" that is a mega-fun co-op experience where you all row a boat together on a long and tortuous path in a three-dimensional river space to get to certain mini-games to work together for higher ranks to shave off time of your total run like a speed-run. It is fun, creative, and uses the Joy-Cons to their full potential (no sandwich eating like in 1-2 Switch, though, sorry), so I'd also highly recommend it, especially at this price, as a party game for up to four people.

Super Mario Maker 2 is already one of the best values in gaming due to its literally infinite amounts of user-generated content and levels, with styles of 2D platforming levels to match all abilities and preferences and a wide suite of level-creation tools to let you make the platforming levels of your imagination. So at $40 instead of $60, for most people this should be a no-brainer (especially for platformer fans), as long as you have a Switch Online subscription required to play and share levels over the Internet. Just like Minecraft or the PS4's recent Dreams, what makes the game great is the community's ability to make extremely well-made levels to compete in and share with others online. But if you're not into that, Nintendo also added a 100-level singleplayer mode of Nintendo-created levels (so no random troll levels) that's also very good.

A few honorable mentions are Mariokart 8 Deluxe down to $45 from $60, which is a must-play for any gamer and very fun with family and friends, Mario & Sonic at the Olympic Games Tokyo 2020 which is also down to $40 from $60, which I haven't played or gotten yet but I've heard some decent things about it as a party game (which might be worth getting to fill the absence if the real Olympics in Japan get cancelled or delayed this year due to coronavirus), and Yoshi's Crafted World, which I've played and find cute and fun, but agree more with its pricing of $40 instead of $60. Lastly, Captain Toad: Treasure Tracker is down to $30 from $40, and it's a very soothing and simple puzzle game in the style of a 3D platformer in very small cubic levels where Toad cannot jump, You'll beat it quick, but thoroughly enjoy the relaxing time you had with it like I have had so far, and it even has some form of 2-Toad multiplayer in it, so yay, I guess.

As for the actual Switch itself, multiple places have a bundle deal with the Switch plus a free Mario-themed wired PowerA controller thrown in. That was one controller I owned for less than a month before returning it to save up for a Splatoon-themed limited edition Nintendo Pro Controller (which eventually drifted and I sold on eBay, may you rest in peace, sweet woomy prince), but it seemed good and got the job done while I had it, wires and all. Also, the wireless PowerA controllers are down to $35 from around $50, and with their Mario designs and motion controls (double-A batteries and all), they're probably a decent alternative to the pricey Pro Controller, even if I haven't tried one since again, I have a Pro Controller already.

Anyways, now on to the second topic of this post, which is also very Mario-themed, and also somewhat breaking news since this just got announced earlier this afternoon via The LEGO Group and Nintendo on Twitter.

Nintendo and LEGO team up for Super Mario-themed... something. 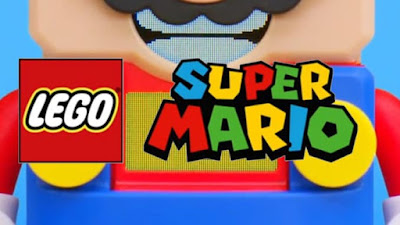 
I'm saying "something" because we don't know what it is yet, but most likely it's a series of LEGO sets. This is interesting, and it would be first time that LEGO has formally partnered up with Nintendo to adapt one of their game-franchises in building-block and minifigure form. It isn't the first videogame series to receive LEGO sets based on (hello, Overwatch and Minecraft), but it will open up a potential interesting set of possibilities for more Nintendo-themed sets, like hopefully the previously-rumored Zelda, or Metroid or (less likely but most likely to be more popular) Pokemon. Ultimately, I just still can't process the fact that we'll then most likely be getting a Waluigi minifigure to join Luke Skywalker and Iron Man on my desk, but hey, we already had an Amiibo for the under-appreciated guy. Would a Funko Pop! of my Wah-Boy be too much to ask for, Nintendo? I'm just saying.

Both companies shared a short video on their Twitters showing what appears to be Mario himself in either LEGO minifigure or LEGO set form. I've seen online speculation that this could be for some sort of wacky and expensive Nintendo Switch TV dock, due to the fact that there seems to be the black underside of a Nintendo Switch slightly visible behind Mario's pants. There's even LED lights on his eyes and chest of the iconic Question-Mark block, so anything goes at this point. Both of these companies are known for their creativity, fun, and appeal to children all over the world, so this makes perfect sense. Also, the weird-looking Mario, uh, thing, seems like some sort of wacky and awesome Nintendo invention like Labo or Ring-Fit all over again, and I'm all for it already!

Anyways, that would be the end of this post. Thanks for reading! To my readers, what is your favorite Mario game, and why? Mine would be Super Mario Odyssey due to its constant inventiveness and fun in its platforming, level design and mechanics, and art and music. What is your reaction to this interesting collaboration between LEGO and Nintendo themed after Super Mario? What do you think the Mario thing in that shared image is? Do you like building LEGOs, and what was the favorite thing you built growing up? My favorite LEGO set I've ever built was probably Obi-Wan's Jedi Starfighter, which I didn't get that long ago, either (when I was maybe in the seventh grade, two years ago), and I love the very idea of LEGO. Does this unique collaboration interest you in any way? Let me know all of this down below in the comments, and I'd love to be able to start a conversation.

Until tomorrow, this is Arca, signing off. Your blog is in the right castle!

P.S.: If you haven't already, please check out my previous post, which was a story about an escape room I recently did with my friends themed after a murder on a train (what a surprise!). It was very fun to write and it's a never-before-told story, so you can read it here: http://www.arcabaran.com/2020/03/the-coronavirus-escape-room-experience.html