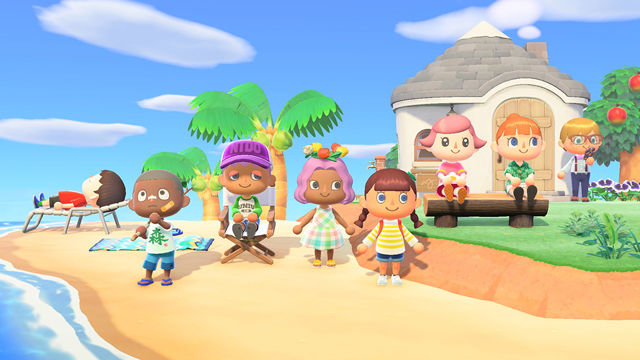 I may be stuck at home without my pre-order copy of Animal Crossing: New Horizons shipped yet, and be forced to play Jedi: Fallen Order on my PS4 while Onur hoards our Switch to play The Touryst, but even when it arrives, sharing the game won't be as seamless as it could be. That's since Nintendo made it so that there is a one-island-per-console limit in the game. This was practice in previous Animal Crossing games, but there were ways around it on the Gamecube at least with multiple memory cards and I'm not sure about the 3DS. But to make consumers forced to buy not just another copy of the game, but an entire separate system if they live in a household where multiplayer wouldn't work out due to petty disagreements among siblings or family ("No! I wanted that tree there!" "But it's next to my house!"), or just want to be able to shape their own island, their own way. This particularly isn't good since in these stuck-at-home times, a game about relaxing that is slow paced for once one is done taking biology quizzes at-home or doing "distance gym" while the apocalypse unravels around us would be quite great to share... if it was at all, great to share.

For me, this isn't a big issue. Onur and I get along quite nicely, almost all the time, unlike many siblings in other families I know of. So at least I know that even if he is the island "manager" and I have to consult with him before being able to change certain things, it won't be a big deal for me since we will both have each others' best interests in mind. But when we decide to both play at the same time instead of in separate sittings, that's when things get semi-mediocre.

You see, the system in the game for local multiplayer is that while up to four people can play local multiplayer on the same Switch console, one person has to be the "leader" while the others are "followers". There is no split-screen. Only the leader gets to do certain things, while the followers have to always tag along to the same places and whatever items they collect must be retrieved from some "vistor's service" building or something like that (I forgot the specific name) at the end of each session. That would be beyond annoying with most groups of four people. But for Onur and I, again, that isn't a big issue.

Would it be nice if we could have our own islands? Definitely. Would it be nice if the leader/follower limitations weren't in place? Absolutely. Is it quite anti-consumer to not let customers have the option to do local co-op by "flying" to each others islands, and also to have split-screen as a choice? Yes, definitely, and absolutely! But does this make the game worthy of, say, zero stars? Is it no longer a masterpiece due to this? Definitely... not.

But then again, lots of fans seem to disagree or at least want to prove a point. so they've taken to review aggregate scoring sites like Metacritic to voice their grievances in the form of "review bombing", a common phrase in the games industry that refers to when a very critically-praised game gets a fan backlash that causes only a few individuals to overwhelm review sites with extremely negative reviews in an attempt to lower the score and make their voices heard. Here's a screenshot of the current situation for New Horizons, in a screenshot from the last time I checked: 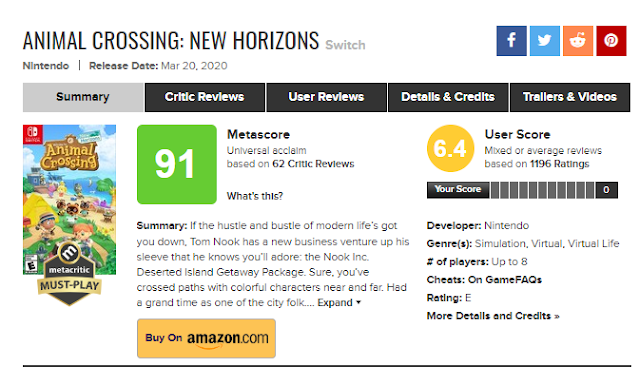 So, let's see... The critics absolute love it and Metacritic themselves have given it a "Must-Play" badge! That's not surprising, and a very good thing. I bet the fans share that sentiment, right? Well, the answer is, the majority due, but thanks to the childish review-bombing done by just a few individuals en-masse, the user score is below failing. No, this isn't a The Last Jedi situation where a portion of the fanbase legitimately despises it while the other majority of the fanbase and critics love it. The fans aren't upset about the state of the game overall; they're only mad about the multiplayer, for the most part. Which doesn't justify giving it a score of zero.

I've always found review bombing to be pointless. Here's a message to whoever did this: Your reviews will do nothing but bring negative attention to yourselves, not the game, regardless of how valid your points are (and in this case, their points are valid but they obviously didn't feel that the game deserved a 0). There are plenty of ways to legitimately voice complaints to the developers of a game. Reach out to them, politely, on Twitter. Start a petition, politely-worded, explaining why you think what you do and what should be changed and how many people would agree with you. Or, if you really don't like a game from the get-go for just a small reason.... don't buy it. Vote with your wallet. Companies will learn from their mistakes, instead of all the attention being directed to those who review-bombed a game so that the issue at hand is mostly ignored.

Anyways, I personally have quite a lot of hope that Nintendo will fix this. Why? Because this isn't the first example of controversy over this exact same game. Prior to launch, many were (rightly) outraged about the lack of ability to back up their save data for this game to the cloud, even as paying Nintendo Switch Online subscribers. Hours of progress could be gone if anything bad happened to your Switch by accident, and it's not like it's a competitive online game where cheating needs to be prevented (even though I think it's ridiculous that Splatoon 2 doesn't have it either... just implement other methods to stop hackers, Nintendo!). So what did Nintendo do? Just weeks later, they announced in a Direct for the game that they were working on implementing some sort of way for cloud save backups for it in the future, no matter how ideal it may end up being. Even with waaaay less-extreme fan concerns, they have addressed on the Switch when it comes to multiplayer. When the Switch port of Captain Toad: Treasure Tracker released, a few fans and reviewers calmly pointed out that the local multiplayer was pretty lame. It was just shooting turnips at the screen with a gyro aim. So then, a few months later, they added 2-player Toad and Toadette local multiplayer in a free update! I have faith in Nintendo's ability to listen to fan concerns and not just be in it for the money... even if they haven't exactly caught up to the online standards of their competitors and Joy-Con and Pro Controller drift is still an design flaw issue that they haven't clarified if they're addressing or not.

What do you guys think of all of this? Isn't review-bombing pointless? Do you share my sentiments that Nintendo is being anti-consumer and a bit greedy? Do you think they'll actually fix it eventually, as they did with cloud saves in this game and with the two-player in the Switch port of the original Captain Toad's? Have you gotten your hands on New Horizons yet, and if so, are you enjoying it, frustrating sharing systems and all? Leave all of this in the comments section below, and I'd love to be able to start a dialogue with any of you.

Anyways, that's it for this post. See you in my next post tomorrow. Stay healthy, wash your hands, and social-distance yourself if necessary where you live. This is Arca, signing off. Have a good one.