Actually, this is bad. 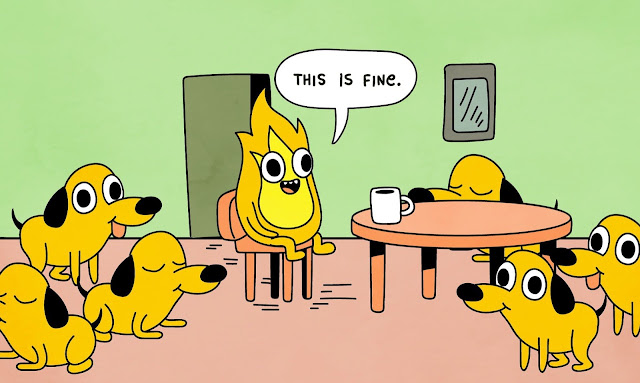 Gulp. So, remember how I said I preferred virtual school to all of my previous experience in 9th grade going to school thus far? I still stand by that opinion. However, I think that the realities of this whole coronavirus thing have actually started to hit me, starting today of all days. I'm not one to panic or to compare it to a sci-fi film, but that's not what I realized. Factually, medical experts and professionals are currently working on ways to ease the pandemic and/or cure it all together, so I think it'd be safe to bet that it will be gone by the end of this year with a 99.99% certainty. Zika anyone? Ebola? Whatever other diseases (oh well, I'm not good at remembering previous outbreaks other than the Black Death, which is not a good example as it happened in the 1300s and involved fleas on rats, not viruses on bats). Anyways, the thing that I realized is that social distancing sucks.

Yes, I attempted to downplay this by saying that I didn't get to see my real friends in school that much due to different classes and different schools. That's still correct. But what about my non-school friends? My neighbor and long-time friend for a decade, Young? Just minutes ago as I was writing this, I was unable to play basketball together with him at the hoop in front of my house as we usually get to do every week (but hadn't for nearly a month as of now). Yes, online socializing like Hangouts and Discord is great, but out of my laziness I hadn't tried that yet.

Today, I went to the park (a park that I've been going to and walking with my family constantly throughout my life) to take a walk. But not on the "common path" where everyone in the area seemed to love "social distancing" in. But on the giant vast lawn expanse next to it that typically would maybe have people picnicking or playing frisbee on, and by taking circles around the grass and emptiness. The cherry blossoms and other flowers were particularly nice though, and I snapped pictures for them for my online biology assignment that I won't insert until maybe tomorrow... but don't get mad at me, Mr. Teacher! I already added a picture, just like you asked (or actually, sent us all emails about).

This morning, I saw via a Discord status that another one of my close friends and fellow-blogger Burak was online playing Minecraft on his Xbox. I have a Switch with the bedrock edition of the game (or rather, one with freshly transferred-over data), and having friended his gamertag I joined his world. I asked him in the chat if he could voice chat through Discord, Hangouts, or by calling me with his phone as we played together. Ironically, at the exact time that I needed him to have access to his phone the most, he informed me that he recently accidentally dropped it in the toilet. Being an older model iPhone, it isn't water resistance-rated, so I responded with an F in the chat to pay respects. (The phrase "F in the chat", if you aren't a gamer, is a thing said whenever someone passes away or something is lost, as a way to mourn it. The F DOES NOT stand for any word, but is a reference to some older online multiplayer game where the F key on the keyboard would allow someone to pay respects to a fallen player.)

Have I tried long-distance gaming socialization? Yes, I have, even before this coronavirus stuff. Last summer, I played Minecraft servers with my two cousins who were playing on mobile along with myself on Switch and my brother on his tablet, while they were literally across the world from us in Bursa, Turkey (across different devices, platforms, and time zones-- technology amazes me!). That was minus any voice chat, though. I recently tried voice chat on Discord and FaceTime for a few rounds of Super Smash Bros. Ultimate with some of my friends, and it worked well and there was surprisingly little and rare lag in the game for private matches.

However, just hearing someone's voice or seeing them on a screen doesn't feel the same as being able to invite my buddies over for some Minecraft local (offline) PVP, or Mariokart, or playing anything outdoors like basketball or biking together. I do indeed miss it. It seems that we're in the long-haul for this, and there's no way that virtual school won't be extended past just this upcoming week as was originally planned by the people in charge of my school (and other schools), since New Jersey governor Phil Murphy recently closed all schools and non-essential businesses indefinitely.

That means more rewatching old movies (yesterday I rewatched via rental Spider-Man: Homecoming) and possibly whichever new ones I can find on Netflix or Disney+ (today my brother and I watched Angry Birds Movie 2 on Netflix, and that was... not that great. There was no reason for it to be terrible, and it wasn't, but it wasn't as fun as the first one, I feel, by a lot). More waiting for The Rise of Skywalker to come to Disney+ early. More waiting for my gosh-darn physical pre-ordered copy of Animal Crossing: New Horizons to show up to my door, delivered from Target with a supposed pre-order bonus (the entire world has it already! I want to go on a virtual vacation by now). More social distancing. Less work. Less stress. But arguably, a lot less fun. Less face-to-face interactions with those who I counted on to take away to monotony of a school year and just play Minecraft with. But on the bright side, all of my math assessments at the moment are on Khan Academy! That more than makes up for it... right?

Just kidding. This isn't good. This is just fine.

What do you guys think of this situation? Am I wrong, or am I right? Has your social distancing been easy to do? How are you spending your idle hours? Leave it all in the comments below, I'd love to be able to respond and interact with literally anyone at all at this point.

This is Arca, signing off. Wash your hands, practice your social distancing, and I hope you all stay healthy. Hopefully this will all blow over soon. But if you haven't already, also read my previous post if you want something to destress yourself and learn about the special scavenger hunt I made for my little brother's birthday yesterday to make it up to him for being stuck indoors... and my attempt at a virtual party with guests: http://www.arcabaran.com/2020/03/trying-to-host-virtual-party-for-onurs.html See you guys in my next post, whatever that is. Hey, Xiang, feel like writing a few sentences about your experience with virtual school (I hear from Young that your district hasn't started it yet), since you're still a new (and the only other) contributing author here? Cya'll later!