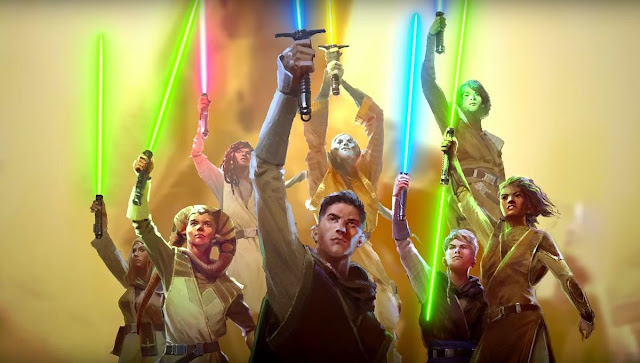 Based on the title of this, you have probably assumed that I am going to be reacting to a teaser trailer of some kind. You would be correct. But if you also assumed that it would be for a movie, you’d be incorrect. A TV show? Also incorrect. A videogame? Not that, either. Star Wars: The High Republic has nearly five related projects for it, and they’re all coming out as early as this summer. It was all made by a big team of storytellers with one central plan in mind from the start and the freedom to explore whatever they wanted, set hundreds of years before the events of the now-concluded Skywalker Saga. So to explain this time period to fellow Star Wars fans, that would be wedged between the time of the Old Republic (which is a fan-favorite time period from the now non-canon Legends). The only way that would be possible so quickly without any filming or coding whatsoever, you guessed it, would be in the form of books.

Star Wars: The High Republic (previously known under the codename "Project Luminous), which had an announcement trailer released a week or two ago (https://youtu.be/xCat5fXRyyU) is not a film saga, or trilogy, or video game series just yet, but rather a publishing initiative of interconnected books and comic books that range from illustrated children’s books, to young adult novels, to adult reading-level fiction, to Marvel comic books. Think of it like an MCU format, as the people in the reveal trailer suggest, where individual characters’ stories and adventures are built up separately over the course of several years before culminating in crossover events and semi-finales.

The authors in the reveal trailer (which utilizes concept art for this project… is that another infant member of Yoda’s species I see in the background?) describe the High Republic as a time of prosperity in the galaxy, where the Sith are extinct and the Jedi Knights operate like “knights of the round table”, or “frontier rangers”, going around as do-gooders and keepers of peace.

Well, if everything is so nice and great in the galaxy, then there would be no conflict and then this entire story would be boring, right? That’s where the Nihil come in. Apparently, they’re sort of like “space vikings”, according to the authors, so the Jedi’s main focus at the start of this narrative may be to keep them under control so that the galaxy can be safe.

Now, what do I think of this all? You see, unlike many never-satiated members of the toxic Star Wars fanbase online, I actually am extremely excited for this. Despite the fact that it’s not the Old Republic (which I feel may be better to save for live action), that’s actually a good thing since it means that authors’ works wont be compared to the dozens of Legends books and games that came before them. Then, fans would be even more upset, since there would be things like “That’s not how Darth Revan’s origin story was like in the comics!!” and then we’d have a Marvel movie problem all over again.

Not only that, but the format of books and comics is much, much less limiting than film would be. Films are expensive, take a lot of time and effort from a group of hundreds of people, and making an MCU-like universe would be tricky to pull off if they don’t make enough money and also since movies in general have more budget limitations. Remember Solo: A Star Wars Story? Yeah, I bet you don’t, since that movie actually was the first Star Wars movie ever made by Disney to result in a loss of profit. Its budget was the most expensive for any Star Wars flick at the time, it released only four months after the previous episodic film, The Last Jedi, and ultimately barely anyone outside of true fans bothered to go see it, and probably just waited for its release on Netflix (or, by the end of this year, on Disney+). In order for this High Republic thing to be as big and ambitious as these storytellers are describing, a film format wouldn’t work at first since it would require maybe 2-3 releases per year that would likely get overshadowed by Disney’s MCU schedule, anyway.

But books only require one author minimum, cost much less to make, can be made much quicker, and the only limitation is the author’s imagination, not some special effects budget or the need to shave off minutes from the runtime (which many agree was to the detriment of J.J. Abram’s recent Episode IX: The Rise of Skywalker). Plus, in my opinion I’d rather read lots of books than watch lots of movies. Books can be enjoyed anywhere and at any pace, without having to go to the movies or wait a year for Disney. It’s even a better medium than videogames for a project like this, since triple-A videogames aren’t just about the story and also require knowledge of game design and mechanics, and lots of modelling and animation and programming that can often be just as costly as any blockbuster movie would be. Plus, I wouldn’t be able to experience games on an airplane or car, unless they plan on releasing them on the Nintendo Switch (which takes even more development budget due to the slightly-underpowered nature of the system compared to other consoles and PC, which means that high-intensity-graphics games have to be more specifically made for the Switch in order for them not ending up as a total mess).

I am beyond happy at this announcement, since it means that I won’t have to wait that long for brand-new, completely-unconnected to the events of the Skywalker Saga Star Wars stories, and it even starts before Season 2 of The Mandalorian and right after the final season of The Clone Wars concludes. This will fill the gap for Star Wars content in my life and also finally get me reading a big book series again. Plus, book reviews have generally done pretty well on my blog and I love making them even though I haven’t written one in years, so it would be very fun for me. Book format, plus the awesome time period, will allow Star Wars to finally not be bogged down by all of its connections and obsession with lore and details, and let us finally see a new side of the galaxy outside of the Galactic Civil War or Clone Wars conflicts. The future (or, ahem, past) seems very exciting, open, and like a blank slate.

So, anyways, what do you guys think of this announcement? Does it excite you? As a Star Wars fan, would you be reading any of these? Do you think that it’ll eventually expand to other forms of media like film and videogames (as I personally think is somewhat inevitable if this turns out to be a financial success for Disney)? Leave all your comments down below.

An interesting theory I saw mentioned about this somewhere online (I believe it was on Reddit) was that even though we know that the High Republic books won't start with there being any Sith in the galaxy, the red Twi'lek seen on the cover image of this post in the bottom left may eventually turn to the dark side to become the Legends character, Darth Talon. I do not know whether that would happen, but seeing as the new canon has implemented well-liked aspects of Legends before (Thrawn, Revan, etc.)... with the exception of Palpatine's clone return, which wasn't very well-liked in the Expanded Universe (Legends) Dark Horse comics... this could end up being true.

Anyways, today (Friday), I will be watching the new third episode of The Clone Wars animated series’s final season, Season 7, which is exclusively on Disney+ instead of on the Disney XD channel or something like that. So, obviously, the post I will make tomorrow will probably be a short review of that episode, as well as my thoughts on the two episodes in the season before that. I would have watched it now, as I’ve gotten home from school, but my brother is at a friend’s house and he’d insist that we watch it for the first time together, just as we did all the episodes of The Mandalorian’s first season when they released. This is Arca signing off, and may the Force be with you all!