Was the coronavirus in NYC predicted by SPIDER-MAN PS4? 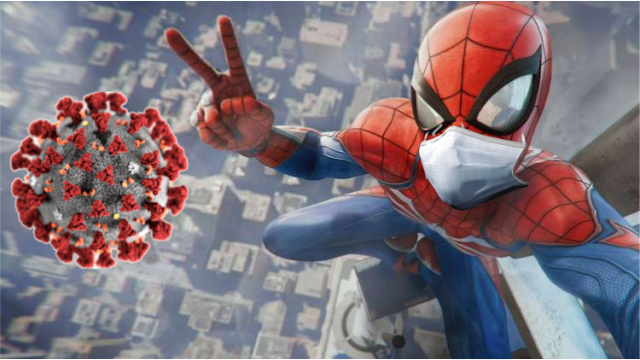 Today, as we had a discussion about current events and biased news sources in my English class, I noticed something. My group was deep in discussion about the way that the coronavirus was represented in the media, and I noticed that it may have been eerily predicted in an unexpected form of media, as recently as 2018: A video game. And not just any videogame, but one that takes place in Manhattan, where a few cases of coronavirus were recently confirmed. That would be Insomniac Games' Marvel's Spider-Man for the PS4.

Now, the rest of this post is about one minor spoiler. It's not a big deal, since the game's been out for quite some time at this point and I won't go into specifics. It's that in the game, a massive new disease manifests itself in New York City that leaves people walking around with face masks and claims many lives, including those close and dear to Peter Parker. This disease was called "Devil's Breath", and was originally a cure for genetic diseases with some harmful side effects. It was stolen by a particular supervillain and released into the crowded streets of New York City when it was still in its harmful form, and then total chaos erupts while their friendly neighborhood Spider tries to find a cure. Just like the coronavirus, it is highly contagious, causes panic and lots of worry, spawns theories of biological warfare, and happens to be present in New York City. Plus, it even primarily affects the victims' respiratory systems.

You can google "Spider-Man Devil's Breath" if you want to learn more nitty-gritty lore details and possible spoilers, or just look at this screenshot of the little widget that pops up on the side if you do:

Wait a minute... does this sound like what I think it does? Oh my! But which one's real, and which one's the impostor? 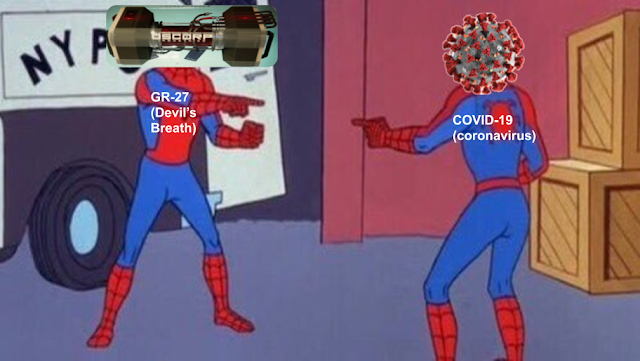 In the game, Devil's Breath (scientifically referred to as GR-27) is a form of biological warfare, just like how many conspiracy theorists position COVID-19 as. Of course, that's all just to create panic and point fingers and none of it is at all true, but it is worth pointing out that there is at least some sort of connection there. Also, people are told to put themselves into self-quarantine by the mayor of New York, the fictional Norman Osborn, so the streets patrolled by Spider-Man suddenly find themselves very empty and bleak.

Now, about that "bio stuff" the title says this contains. I'm no expert, but I found this article titled "'Spider-Man' Super-Disease Devil's Breath Uses Shockingly Accurate Science" on Inverse that showed that, while obviously getting bitten by a radioactive spider won't give someone mutations like Spider-Man, Devil's Breath in-game actually has its precedents from real research. In the game, it was created utilizing a combination of gDNA, artificial intelligence, and CRISPR to try to cure hereditary diseases. In real life, some researchers have actually already explored this very topic of using gDNA in tandem with A.I. while mapping the human genome! There's even been a scientific article published about it: https://academic.oup.com/bib/advance-article-abstract/doi/10.1093/bib/bby072/5074612?redirectedFrom=fulltext (Smells like a sweet, sweet bio lecture, doesn't it, kiddos?)

At the end of the game, Spider-Man has gotten his hands on a cure serum, but not before the pandemic caused lots of harm in just New York City. In real-life, we don't have brilliant inventor superhero millenials like Peter Parker, but we do have biologists, which are close enough for our purposes, anyways. I don't actually understand how any of this works, to be honest, but I'd hope that a way to stop this virus happens soon enough. Before we all die, or something like that.

What do you guys think? Was the game's depiction of a massive virus sweeping New York City used as biological warfare too eerily similar to what people have been talking about in relation to the coronavirus? Or is this (obviously, yes) just one big-fat coincidence and Insomniac Games aren't psychics? Does that gDNA stuff sound interesting or make sense to you? Leave it all down in the comments below, I'd love to start an open dialogue with you all!

Anyways, this is Arca, signing off, and always remember what the late Uncle Ben said: With great power comes great ability to avoid procrastination. But if you've finished all of your homework, kids, and have some free time left, be sure to check out my previous post!: http://www.arcabaran.com/2020/03/star-wars-project-maverick-ea-leaked.html  Technically, it still counts as homework if you leave a comment then track it on your Edublogs comment log. ;)