Hello, this is Arca, and today I will be writing a spoiler-free review of the new movie The Incredibles 2. I watched it a few weeks ago, so technically this is delayed, but since when are my blog posts not delayed, anyway? Regardless of how long it took me to finally make this, let's get right into this incredible review! (You knew I was going to make that pun at some point.)

Me watching this movie is interesting for a few reasons. One, the original film (The Incredibles), to which this is a sequel to, came out the year I was born. I didn't watch it until I was 5, but once again, that means that this movie series is as old as I am! Two, I watched this movie one week after watching another superhero movie: Avengers Infinity War. In other words, I watched two superhero movies in a row, but both were polar opposites, as you could imagine.

So how exactly would I compare Avengers with Incredibles? The first is a high-stakes, action-packed, live-action film aimed for the older audience in which the story doesn't exactly have a happy ending at all. The second is a humorous, family-friendly animated film with a happy ending. But despite being supposedly so different at a glance, Incredibles 2 and Infinity War both have their fair share of similarities. They are both superhero movies that are sequels to another movie, aren't R-rated, and are made by the same company: Disney. So I decided to make two movie reviews on my blog, of each respective Disney superhero movie. Today I would make a review of Incredibles 2, and sometime later (but soon, within the next week), you will be able to see my full review on Avengers: Infinity War. Now, on to the review you came here for, The Incredibles 2!

NOTE: This review will be spoiler-free, but will give away some minor story details (nothing that would ruin the movie if you haven't watched it yet). If you are one of those people who like to go into a movie knowing little to nothing about it beforehand (and don't even watch trailers), then this review is not for you. It is for everyone else, however, regardless of whether or not you have already watched the movie. 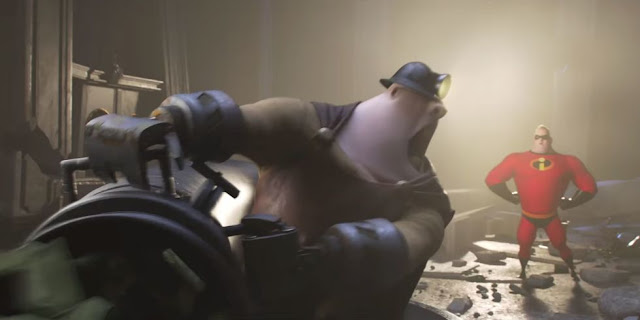 The movie takes place shortly after the events of the first Incredibles movie. A strange villain called the Underminer is attacking the city, and of course, it is up to the Incredibles to stop him! You know what happens: They fight him, cause a lot of damage in the process, but still claim victory, etc. Ironically enough, while attempting to stop the villain and his giant drilling machine from destroying the city, they well, kind of destroy the city.

Due to all the damage,the government to shuts down the Superhero Relocation Program, and the Parr family (AKA the Incredibles) are forced to live in a small motel without much financial assistance.

While staying at the hotel, a businessman tells Bob Parr about a deal presented to them by the company DevTech. So in the middle of the night, Bob, his wife, and Frozone go to his headquarters, dressed in their old supersuits. A man named Winston is the head of the company, along with his sister Evelyn. 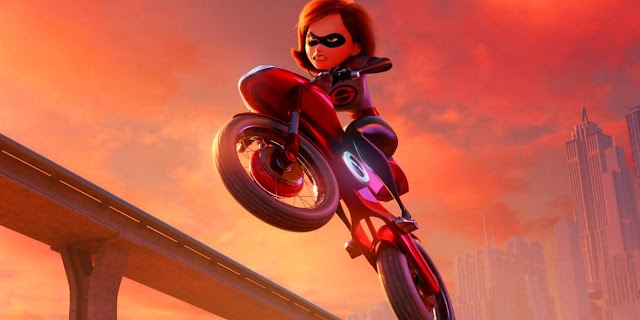 Here, they discuss a deal made to try to make superheroes legal again through means of several publicity stunts to try to regain positive publicity. Much to Bob's dismay, his wife Helen is at the center of the project, instead of him.

While Helen is out and about fighting crime once more as the ultra-flexible superhero Elastigirl, Bob is forced to stay home and take care of their three kids. All three of them have daily problems: Dash struggles with his math homework, Violett struggles with social interaction, and the baby Jack-Jack struggles to control his developing superpowers.

Bob, after days and days of dealing with the same problems, becomes exhausted and worn out. The biggest issue is especially the infant Jack-Jack, since he has a tendency to randomly burst out and overflow with random superpowers (everything from laser eyes to shapeshifting). So he decides to take Jack-Jack to his old friend Edna Mode.

He asks the eccentric Edna to babysit Jack-Jack, and she agrees... But she doesn't just babysit him. In just one night, she also engineers and creates a super-suit for him, trains his superpowers, and teaches him martial arts! 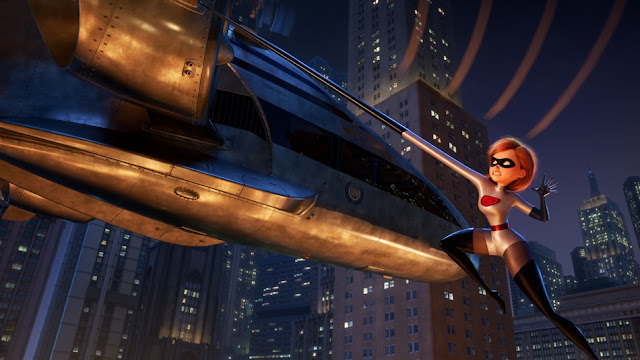 Meanwhile, Helen starts her new job well, doing things such as stopping crime and even stops a train from going off course. Just as she is gaining popularity amongst the public, however, a new threat arises: The Screenslaver.

The mysterious villain who calls themselves "The Screenslaver", is someone who hides their true identity behind a dark mask, and hijacks TV broadcasts and radio transmissions to hypnotize anyone who sees it. This method of mind control allows them to evilly mind control anyone who looks at a screen.

Quite the metaphor for today's age, huh? Imagine if all those people staring at a screen looking at social media, playing or watching Fortnite, and looking at memes, were all under control of somebody, and they had no idea of it? Pixar has chosen quite a controversial concept for a supervillain, but it fits the present era's problems, and I have to say, I respect their decision to do so.

So, will Jack-Jack succeed in being able to control his powers? Will Elastigirl's efforts convince the government to make superheroes legal again? Or, instead, will the Screenslaver hypnotize all their allies against them, leading to a catastrophic chain of events? Will the Parr family get locked up in jail for trying to do the right thing? Find out what happens next, as well as the true identity of the Screenslaver, by watching The Incredibles 2 for yourself!

My Thoughts and Rating

The Incredibles 2 is a rare treat: An animated film that manages to have the perfect balance of humor, emotion, and action. So many animated movies nowadays end up being terrible for those same reasons: Having too much pointless humor, being too cheesy, or just being too boring to even stay awake through. Incredibles 2 shatters these cliches to be a truly hilarious and fun movie. Just like the original, it has a decent serving of laughs that are suited mostly for all ages, but some bits of humor will still appeal to the older audience as well. It has plenty of action-packed sequences that don't overdo it for a family movie, but still manage to keep you awake and often on the edge of your seat. The characters are full of heart and the story is full of emotion. The plot makes perfect sense after the events of the first movie.

But beyond all, I would say that this movie's greatest strength is the brain-candy it provides to the viewers. You can finally leave your movie theater seat and still have more to think about: What if a superhero-like system actually existed in our government? Would superheroes actually be illegal if they existed? The supervillain of choice especially is the perfect fuel for passionate debates with friends, ala: Is the technology in our society doing more good than bad? What if what the movie's trying to tell us with the Screenslaver is already the case? Aren't we already enslaved to our countless number of screens on a daily basis? So maybe the true villain of our lives isn't some guy in a mask, but rather, the Internet itself. These deep thoughts and discussions aren't just an afterthought either. The movie actively pushes these messages into the audience's mind. Everything from the plot of the movie itself to what the Screenslaver says during the movie causes even the youngest of viewers to have a reason to think about it. The villain even says, "Everything has to be packaged and delivered to you; You don't play games, you watch game shows! You don't talk, you watch talk shows! You are being enslaved by your gadgets!"

It's been a while since superhero movies have been casual, fun movies for anyone to watch. The Incredibles 2 is the first film to achieve that in over a decade. And for that, it deserves all the praise it can get. It has great moments of humor, true heart, and some philosophical topics mixed int here for good measure. I honestly think that every parent complaining about their kid spending too much time on a screen should just show them this movie. If you're wondering whether it is a good movie, I can give you a solid double-thumbs up. It's not just good: It's incredible (sorry for the second time I used this awful pun).

It has been nearly 14 years since the original movie came out, and I honestly think that Pixar shouldn't have waited this long to release it. However, the question remains: Was it worth the wait? My answer: Absolutely, undoubtedly, yes. It lives up to the original and even surpasses it in some ways. Despite its few problems in terms of pacing (it starts out at a steady pace but rushes an awful lot near the end), and the fact that a few jokes don't exactly land well, I would still consider this to be one of the best Pixar films. In conclusion, I would rate it a 4.55 out of 5 stars, or a 91%.

I hope you enjoyed this post! I try to post every day or two during summer, so be sure to click the subscribe button at the top of my blog so you can receive email notifications whenever I make a new post. Near Sunday or so, I will try to make a review of the game ARMS. Feel free to leave your thoughts and suggestions in the comments below, but remember to stay positive as I need to approve comments before they become public. If you like my blog, be sure to tell your friends about it so I can gain a greater audience. My current goal is to reach 130K views by the end of the summer, and I am currently at 122K views. Stay tuned, and I hope you enjoy the vast amount of blogging content that is soon to come! :)

Here is a link to my previous post, about the animated Clone Wars series's surprise comeback: http://www.arcabaran.com/2018/07/the-clone-wars-epic-comeback.html