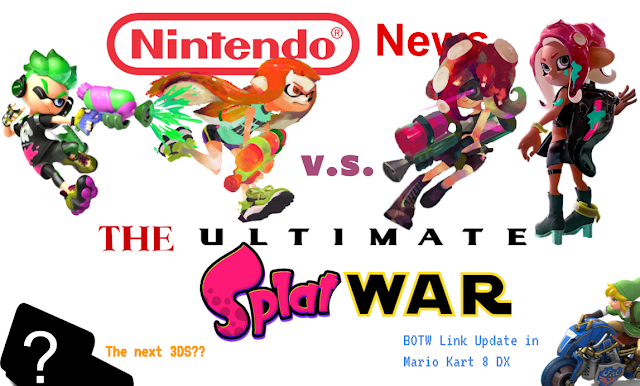 Hello, guys, this is Arca. This will be a brief summary of the Nintendo-related news of the past week or so. The first news is the most immediate since it deals with something going on today (as I publish this).

The new Splatfest today is more than just a party... It's a WAR! 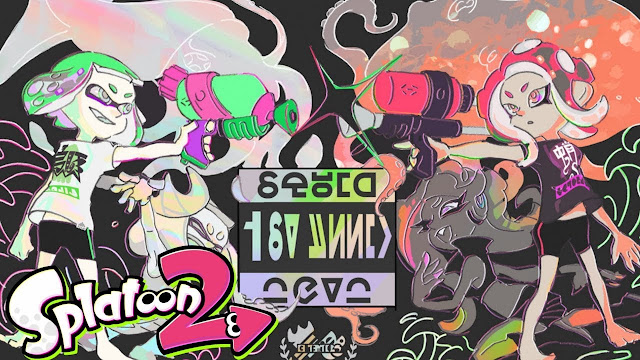 The game Splatoon 2 has events called "Splatfests", which happen once or twice a month, and they are basically in-game competitions featuring two opposing sides. Players will have to pick a side by answering questions like "Peanut butter v.s. Jelly" or "Cats v.s. Dogs" to share their opinion and play online battles to help lead their side to victory. This time, the Splatfest topic is quite an interesting one: What is the superior cephalopod, squids or octopuses (I don't know what the plural form of octopuses is)?

This, of course, corresponds with the recent DLC for the game which lets players complete a separate single-player campaign. At the end of the campaign, players get to become an Octoling (an alternate version of the game's default character, the Inkling), if they so choose. This Splatfest is very different than other Splatfests, since depending on which side you choose, you will be able to play as the creature you chose! This means that if you join team Octopus, you will be able to play as an Octoling temporarily, even if you haven't bought the DLC! However, there is a catch: Your form only lasts until the Splatfest is over, so choose wisely!

The Splatfest started yesterday, June 20 at 9 P.M. ET, and will end today (just in time for the one-year anniversary of the game), June 21, at 9 P.M. ET. That means that right now, if you own the game, you can keep playing the Splatfest until 9 at night. May the best team win!

Nintendo Discusses their Next Handheld Console 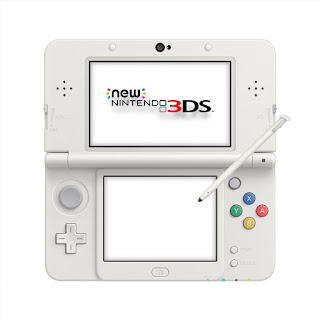 With the success of their latest hybrid console, the Switch, you would think that Nintendo would have already stopped supporting their previous line of handhelds, the 3DS. However, that could not be farther from the truth. Nintendo continues to make games for it, and will do so far into 2019 (next year). The launch of the Switch didn't stop them from launching a new version of it four months later, the New 2DS XL, in July of 2017.

So why haven't they gave up on the 3DS? The answer has to do with a variety of factors. First of all, the 3DS is an older and more developed system than the Switch is. This means that it has a larger games library, and more sales total (so far). Second of all, not everyone can afford a Switch. At just shy of $300, with $60 games, it isn't ideal for smaller children or just people on a budget. That is why Nintendo insists on keeping the 3DS alive: It will continue to generate revenue for them as a budget-friendly, child-friendly option. While some may think of the Switch as the better option (and I agree with them), you can't deny the appeal that the 3DS has. I mean, it's over half less of the price that the Switch is ($130 for the foldable 2DS XL, and $80 for the brick-like 2DS), has much cheaper games ($20-$30 each), and is much more portable. It is super small, and most models fold in half, making it easy to just shove in your pocket and take on the go. Plus, it has a battery life that Switch users would beg for.

This is a stark contrast from the Switch: $300 to buy it, $60 games, much shorter battery life, impossible to take on the go safely without a carrying case, and even fewer color options. So while the Switch has two GOTY games going for it (Zelda BOTW, and Super Mario Oddysey), the steep price may be hard to swallow for many. 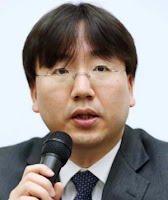 Nintendo is so dedicated to the 3DS that they have even talked of plans to make a successor for it. That's right, a brand new series of 3DS-like handhelds! Here's what Nintendo's CEO, Shuntaro Furukawa, had to say about the topic:

"Though it’s been around much longer, the 3DS has certain advantages over the Switch such as ease of purchase and the like... [For the successor], we are considering considering various possibilities.”

That's right, in Nintendo's eyes, the 3DS is actually better than the Switch in some ways for consumers. He even went as far to say that they are brainstorming ideas for its successor. Who knows? Maybe in a year or so, a 4DS or XDS could happen. Let's just cross our fingers that it doesn't slow down the Switch's momentum in any way (by losing customers and Nintendo's attention shifting too far away from the Switch). 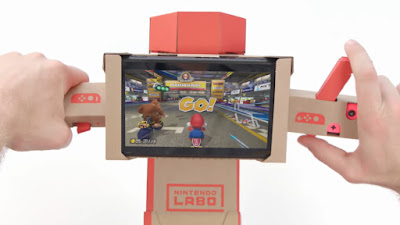 This piece of news has two parts: One more recent, and the other less. Let's start with the less recent one: A few weeks ago, Nintendo announced that the racing game Mario Kart 8 Deluxe would be compatible with a Nintendo Labo cardboard-DIY kit via a free update. This update allowed anyone who owned and built the Nintendo Labo cardboard motorbike to be able to use it in Mario Kart to control driving their karts. While this is cool news, it was also kind of obvious. Who didn't think of Mario Kart when they saw the motorbike in the Labo trailer?

You can watch a short video demonstrating the feature below: 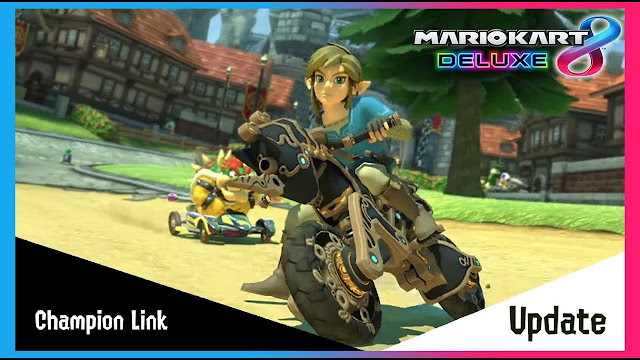 In other, more recent news regarding Mario Kart 8 DX, two days ago there was a free update announced that fulfilled the dream of many Zelda fans: You can now race as Link wearing his champion's outfit from Breath of the Wild. Not only that, but a new vehicle was added, and it was none other than his Master Cycle Zero motorcycle from the BOTW DLC! I am so excited to play as Link from the newest Zelda game and to be able to ride his awesome new motorcycle without having the BOTW DLC pack!

You can see an awesome reveal trailer for it below: 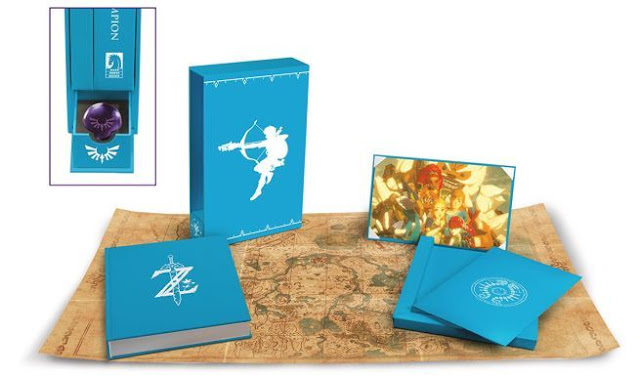 Nintendo, in collaboration with the Dark Horse publishing company, has revealed two epic special editions for their upcoming book The Legend of Zelda: Breath of the Wild- Creating a Champion. The book is the ultimate behind-the-scenes guide to the Game of the Year winning-game, and is 424 pages full of developer interviews, exclusive facts, and lots of concept art for the game and its two DLC packs. It will release on Novermber 20, 2018, later this year.

While the default edition of the book will still be great, for fans who are willing to shell out a little extra cash, there are two limited editions versions available as well. The first, called the "Hero Edition", shown in the image above, includes the book with a blue cover, an exclusive art print of an image of the Champions, a detailed map of Hyrule printed on fine cloth, and a beautiful glass replica of a Spirit Orb, just like how it appears in game. To top things off, it will come in a cardboard little shelf that will be able to store all of its contents in a compact, easy-to-access, and visually appealing way. This addition in available to pre-order on Amazon and costs $100. 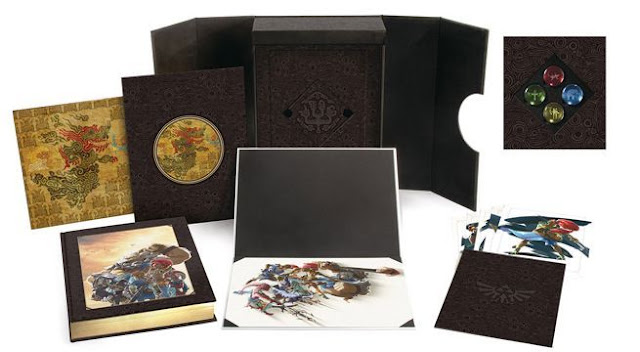 That would be the ultimate present for any Zelda fan, but want to go a step further? Get the second, much more awesome special edition, called the "Champion's Edition". Thought that the previous edition was expensive? Well, this one is even more expensive, at $150. However, it is double the awesomeness of the previous edition. The entire thing is encased in embroidered leather, the book has an exclusive cover with pages with metallic-gold ridges, a cloth tapestry of Calamity Ganon, a print of all the Champions, and six smaller prints of each champion individually. It also includes glass replicas of four champion's orbs, each with their own separate colors and etched designs. That was a mouthful to say and write, but it just increases the insane amounts of epic that this kit is. It is available to pre-order as a Gamestop exclusive.


I hope you enjoyed this post! I try to post every day or two during summer, so be sure to click the subscribe button at the top of my blog so you can receive email notifications whenever I make a new post. Tomorrow I will try to write a review of the game ARMS. Feel free to leave your thoughts and suggestions in the comments below, but remember to stay positive as I need to approve comments before they become public. If you like my blog, be sure to tell your friends about it so I can gain a greater audience. My current goal is to reach 130K views by the end of the summer, and I am currently at 121.6K views. Stay tuned, and I hope you enjoy the vast amount of blogging content that is soon to come! :)


Here is a link to my previous post, which talked about the features of blog upgrade 8.7, and how I restored Xiang's blog: http://www.arcabaran.com/2018/07/upgrade-87-features-i-revived-xiangs.html


If you liked this post, be sure to browse the labels at the top of the post's sidebar to find other similar posts on this blog. Here are some other blogs you may like.


Onur’s Blog- First Step, Next Step, This Step: My little brother got inspired by me to start his own blog too! He writes mostly about Nintendo and posts decently often. Here it is: https://onur3.blogspot.com/


Burak’s Blog: My AABO buddy Burak has written about very similar topics that I do, over on his own blog.  I highly recommend you check it out, so here it is: http://biloglu.blogspot.com/ He even figured out how to intricately code and host his own website, and I have to say I’m quite impressed by it: http://buraksblogmore.com/


My YouTube Channel: I also happen to have a brand new YouTube channel, and will post videos there from time to time. It is called ArcaVids, and you can see it here: https://www.youtube.com/channel/UCeLK4m7tp3K1q2eMxkbQ91g


This is Arca, signing off. Bye for now!