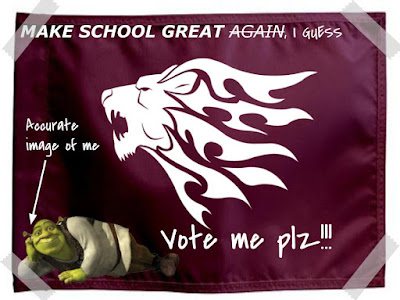 It all started a month ago. It was the time to sign up for being representatives for student council executive board. As you already know, I don't exactly have the best past with elections (Google+ moderators... Edwin won... *cough, cough*) but my mom wanted me to give it a try because I could put it on my resume or whatever. I agreed that instead of running for 7th grade president (I am currently in 6th grade but this vote is for next year), I would only run for vice-president.

I thought I had no chance of winning because in the beginning of the year, when they did the elections, twenty people ran and I knew I had no chance among that many people. But this time, things were different. For vice president (and apparently president as well), only two people ran, including me. My only opponent was a girl whom I wont say their name for the sake of their privacy, obviously.

We had to prepare a short speech which would be recorded and shown to all homeroom classes. I remember cringing so much when I saw how mine turned out. I didn't always look directly at the camera and I read it awkwardly since I was kinda nervous. My opponent's speech wasn't amazing either. At least we got off on an equal foot.

So today, at around 2:00, when I was still in art class at the end of the school day, there was an announcement over the loudspeakers telling the people who ran for student council to come to a certain room. That's where they gave the results.

Apparently, only one 8th grader even bothered to run for vice-president, so they automatically won their role. President for eighth grade was going to be announced later. The only question that they could answer at the moment was who won 7th grade vice-president.

At least it wasn't a total loss.
They told me that the vote margin was very close, and that they would still allow me to have a role in student council. I would be the secretary.

So even though I can't be vice-president, I will still get to be secretary. Basically that means that I will attend meetings and gather ideas from the council to tell to the other representatives.
"Yipee!"

Summer is almost here, and there are only four more days of school left. Thursday, June 22, is my last day of school. During the summer, I will make at least one post a day (except when I'm on vacation in Turkey). Once school ends, I will give my blog a mega upgrade. I will release upgrade 7.0, which will be so much better than 6.0 (which did nothing). My entire blog template will look more professional, cooler, and there will be a "read more" button for every post so you don't have to scroll down forever to find other posts you want to read.

My next post will be on Thursday, when school ends. Until then, BBBYYYYYYYEEEEEEE!!!