The Legend of Zelda: Breath of the Wild - Game Review with No Spoilers (Nintendo Switch) 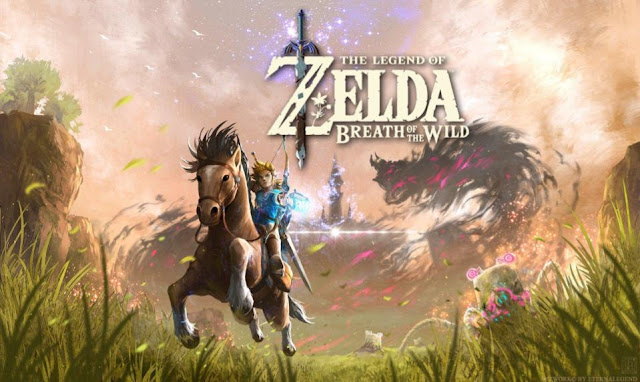 This will be a game review of "The Legend of Zelda: Breath of the Wild", released for the Nintendo Switch and Wii U systems. The version I had was the Switch version, far superior than the Wii U because, A. The graphics are insanely better, B. You can take the game with you anywhere, and C. Who the heck wants to buy a Wii U at this point? This game is a system seller, the only reason the pick up the Switch on its launch date. Even though months later from the release, some other amazing games came out, I am confident that this will remain not only the best Switch game so far (maybe until Mario Odyssey comes out in the winter), but also my personal favorite game of all time.

A Beautiful Masterpiece of a Game

What's the point of even adding an underlined section for my rating out of 5 stars? You have already heard countless times from others that this game is near perfect. It is literally 10/10 IGN (I'm not even joking about the meme, it literally says so on IGN's website), and IGN tends to be harsh critics. 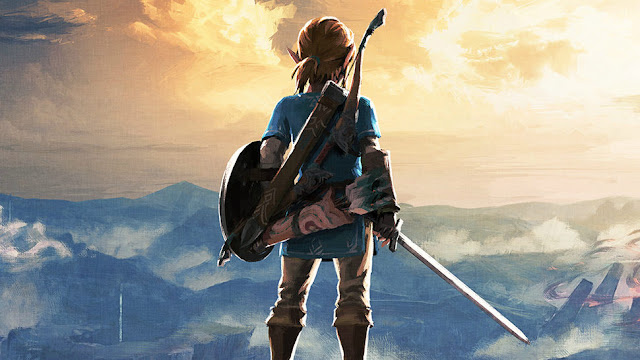 What's it about, you may ask? That is a hard question to answer. But to put it as simple as possible, it is an gorgeous realistic open-world, exploration and survival story-based game with insanely intense difficulty, and a surprisingly deep story line with wonderful characters with emotional back-stories. You can literally explore every part of the world's map to your heart's content. The difficulty has insane peaks right from the start of the game. 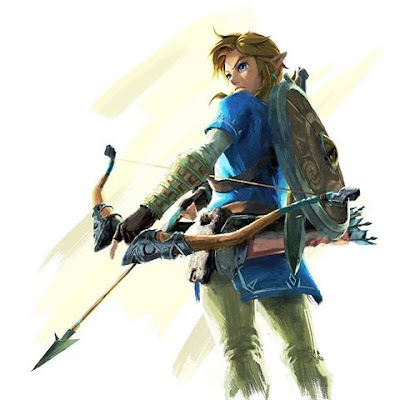 That sure was a mouthful to both say and write. This game takes everything you though you knew about Zelda games and rips it, shreds it to pieces, feeds it to a Bokoblin, destroys it with a shock arrow, and then burns its with lava. Unlike the previous Zelda games, which all stuck to the same basic formula of completing quests in a set order, this is much different. Right from the beginning, you are given nothing but ragged clothes and a stick with the object to walk over to where Ganon, the main boss is, and fight him whenever you please. It would be a bad idea, and you would get destroyed to ashes without a doubt, but you still can do it. There is no order in which to complete certain tasks, everything happens naturally as you explore the massive landscape around you. Oh yeah, did I mention exploration?

Let's start with my favorite part of the game: Freedom to Explore a Beautiful Open-Landscape 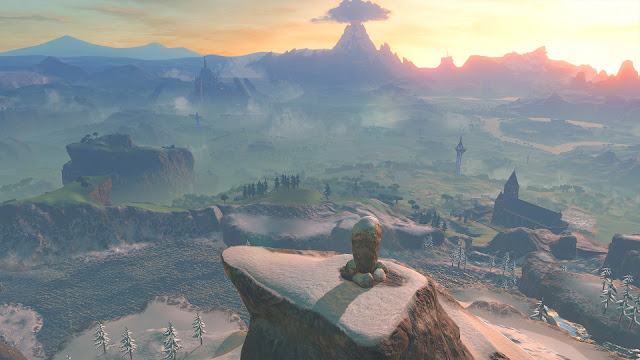 Everything you see in the so-called "background", from the mountains, castles, rivers, trees, and giant deadly volcanoes is something that you can physically reach. Let that sink in for a moment. I just said that literally every detail of the world that you see in the distance is something that you can explore. The world may not technically be infinite, but it pretty much is. The grand scale of the world is unlike anything previously done before in a open-world game. Forget Zelda, this is more similar to something along the lines of Skyrim. Every nook and cranny can be explored to your liking. This game encourages curiosity and discovery, and even rewards you for it. Wonder what would happen if you pushed a boulder away from you? Behind it, there may be a surprise treasure, challenge, or reward hiding, whether its a Korok Seed, chest, cooking ingredients, or a massive and scary Guardian for you to fight. 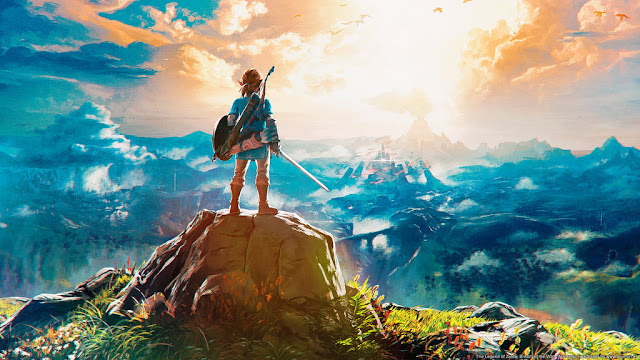 The Xbox One and PlayStation 4 boast about their amazing 4K graphics, and blah blah blah. Image resolution doesn't always matter in some cases. A unique and amazing art style can simply be enough to make the graphics exceptional. Breath of the Wild's characters and landscape all look as though they were painted by watercolor and pastels, and have a anime-ish kind of vibe when it comes to the character's faces. Every little detail looks like the artists who worked on the game put an insane amount of effort into. Every individual blade of grass moves on its own, and is effected by where you walk. The nature around you looks stunning. Even the music is really good, and it matches the mood of what you are doing in the game at the moment. It has mellow piano melodies when you explore, the music changes pace when you fight so that it is more exciting, and whenever a Blood Moon starts in the game, the music legitimately sounds scary to match the mood. 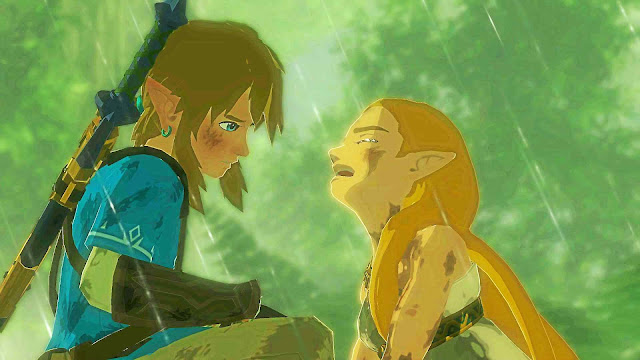 Unlike many other games, which treat NPCS as an excuse to sell the player items or guide them along the map, in Breath of the Wild each non-player character has their own unique back story and personality. In most games I usually skip unnecessary conversations with NPCS, but this time I want to purposefully stop to get to know each one. The Princess Zelda back-story was well-written out. Hestu, the maraca-shaking plant creature, always puts a smile on my face whenever I come across him. I even feel bad for Beedle living poor. The story has a surprisingly deep lore, most of which takes place before the actual events of the game. (Minor spoilers ahead.) The basic premise of the story is that 100 years before the start of the game, Link and Zelda attempt to defeat Calamity Ganon, but both get badly injured in the process. Zelda protects link by putting him into the Shrine of Resurrection, where is is put into a century-long rest and forgets all of his memory of who he is and what has happened. This setup allows for interesting quest of finding memories by completing quests to find out more important knowledge of who he is, how to use his powers to defeat Ganon once and for all, and the real story of what happened 100 years ago. (There is more to it than what I told you before.) 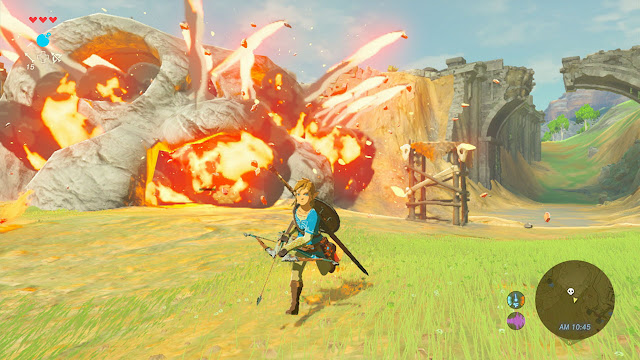 I expected the combat in this game to be simply spamming the attack button, but it has more of a strategy to it than that. You can use a combination of a bow and different types of arrows (fire arrows, ice arrows, regular arrows, shock arrows, and bomb arrows), as well as many types of melee weapons such as swords, clubs, spears, and axes. You can also use a range of different abilities given to you from completing the game's first few shrines. These include magnesis (you can lift up metal objects), and many more, one of which are two types of remote bombs, which you can throw and will explode when you want it to. The game has many high spots, such as ladders, bridges, and cliffs from which you can shoot arrows and bombs from to attack from afar. You can crouch behind a tree, rock, or bush and attack an enemy camp slowly. In close-range combat, timing is key, as you need to hit and dodge at the right times or else the enemy can have the advantage, some of which can kill you in just one hit. Sounds difficult, right? That is my next topic of discussion.

Here is a video showing some of the combat methods in the game:

This can be seen as a pro for some people and a con for some people. If you expected a game that holds your hand, teaches you the controls and mechanics slowly, explains everything clearly, and gives you a helping item if you died too much... then this is clearly not the game for you. Right from the start, you are given no word on exactly what to do, which may not only offer a sense of freedom that you can't get in a linear game, but also makes it more difficult to get the hang of at first. Within the first hour of playing the game, you are required to complete a Shrine (the Shrine itself is easy) which in order to enter the Shrine, you need to get past two Guardians, which can kill you in one hit. At the start, with the weapons you are given at first, it is impossible to kill these Guardians, so you have to quickly jump over walls to get past them or risk being fried by their laser-eyes. Many enemies have the ability to instantly one-shot you if you don't correctly dodge their attacks in time. You can cook, but you are given no instructions or recipes, so you have to find out how to make meals yourself by experimentation of different ingredients, books you find lying around in huts, and from conversations with NPCs. If you experiment for a meal and then the recipe goes wrong, the result is poisonous food that cannot be removed from your inventory without selling it to a villager. Weapons run out of durability quick, possibly even to quick. You will have to constantly cycle through new weapons. This game will constantly kick your ass and hand it to you. Calling it "very hard" is not enough to describe it.

Who Should and Who Shouldn't Get it? 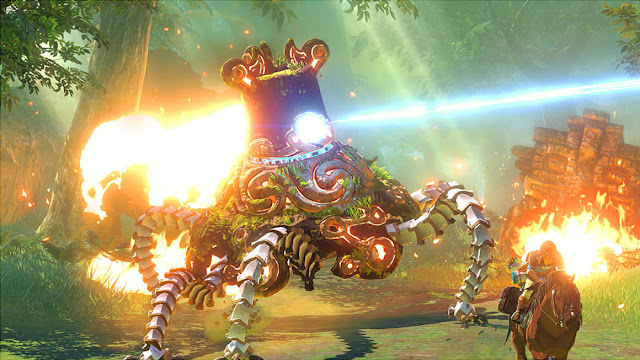 This game is perfect for any Switch owner. If you have a Switch and don't have this game, then go and get it immediately. I could even argue that it is worth it to get a Nintendo Switch just to play this game. It will be enjoyed by all gamers, especially those who like open-world adventure games. Hardcore fans of The Legend of Zelda series will undoubtedly love this game, but you don't need to be a fan of the series in order to enjoy or understand this game, since it is completely different from the other Zelda games. Amiibo collectors will also be happy, since every single amiibo that has been released will give you some sort of reward when you scan it into the game (that is way more helpful than how Amiibo are in Super Smash Bros). Everyone should try to get to experience this phenomenal game. Who shouldn't get it? People who don't want a difficult game, one that will take you 100+ hours total to complete, and small children under the age of 7. Parents, if you want to get this game to accompany your kid's brand new Switch, only do it if they are the age of 8 or older. That is since not only is the game massively difficult, but some parts may not be fit for younger children. The game isn't bloody or graphically violent or anything like that, but fights can get really intense.

Overall, the game is an amazing entry in the Zelda franchise, that completely reinvents the series and changes what it is known for. This proves that Nintendo isn't afraid to stray from the norm in some of their most beloved and famous game franchises, and can continue to do this for other game series' such as Mario with Super Mario Odyssey (releasing this October of 2017), Metroid with Metroid Prime 4 (releasing sometime in next year of 2018), and Pokemon in the untitled Pokemon RPG game confirmed for the Switch to be released at least two years from now. We can't be sure what games will come after that, but if Nintendo keeps reinventing what we are used to, it will surely be amazing.