Is the Nintendo 2DS Still Worth Buying in 2017? 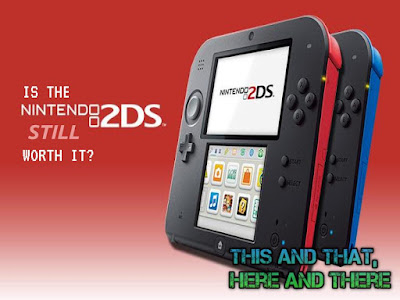 Hi guys! This is Arca. I remember that about a year ago I got a Nintendo 2DS. What is that, you may ask? Think of it as the exact same thing as the handheld portable system of the 3DS, except (as the name suggests) it can't make images in 3D. With the Nintendo Switch being already released two months ago, many people probably aren't considering a 2DS anytime soon.

The official price of the Nintendo 2DS is $80 if you find it on store shelves. Due to the fact that it isn't very popular anymore, it will be very easy to find. I remember  last summer I found it right away when I went to Best Buy. Not only is this $80 price point very affordable compared to hundreds of dollars for other gaming devices, this price also applies to box bundles. In bundles, you can get the system plus a game in the same box for the same price. The most common bundle is with Mario Kart, which is a very fun game that would have been sold for an extra $30 separately.

The most obvious difference between these two systems is that the 3DS can make show images in 3D without the need for special glasses, while the 2DS does not have this ability. This shouldn't really be a problem, however, since most people I know who own a 3DS never really  use the 3D mode option. The 2DS has a brick-like design that can't be folded in half, unlike the 3DS. Both systems can play the same exact games. This includes a massive library of over 2,000 compatible 3DS and DS games. The 2DS can still play games made for the 3DS, just obviously with the 3D mode turned permanently off.  The 3D wasn't as amazing as the commercials for it may have made it seem, and it hurt your eyes after a while.

Even though it can't be folded, once you get used to holding it, it is a lot more comfortable than you may think. My hands are less cramped holding this than a foldable 3DS.

The Switch is in its own separate league, and is much better than the 2DS. They can't be compared. If you can get a Switch, get it. It will be worth it, I promise. I own a Switch myself. This isn't a question of which one you should get instead of the other. It is more like if you should also pick up a 2DS, regardless of getting a Switch as well or not.

The games are a big part of it. Some of the greatest Nintendo games of the past decade are 3DS exclusives. A 3DS is much more expensive than a 2DS. A 2DS gives you essentially what is the same exact experience but at less than half the price of the 3DS. The 2DS, just like the 3DS, can play both 3DS and original DS games. This means you can play a classic such as Mario 64 and a modern game such as Super Smash Bros.

The less money that you spend on the console itself,  the more you have for the games. The games are amazing, and very cheap as well. I have seen some older games that were less than 10 dollars on Amazon. Their typical prices are between $20-$30. For the more powerful games (typically Wii U ports), it may cost up to $40, but that is rarely the case.

You can play 3DS games, DS games, and even some Wii U games! Some of the best games on the Wii U have either exact ports of or similar versions of on the 3DS family of systems. Super Smash Bros, Super Mario Maker, and Yoshi's Wooly World were all Wii U games that you can buy a 3DS version of that is the same exact thing.

It obviously isn't very powerful. The screen quality is I believe between 480p and 500p, but the pixels aren't very noticeable unless you hold the thing up to your face. The battery life is around 2-7 hours long, and over a month in sleep mode. The battery life only dies out quicker on more graphically-demanding games (Smash Bros), but it usually gets the job done. It is charged using its own type of AC adapter that also works with 3DS systems.

If you want something that is very portable, you should definitely consider the 2DS. It is pocket-sized, and very lightweight as well. It is around the same size as a 3DS unfolded.

The 2DS is a very fun portable console, but is it worth it? Yes, but it depends on what type of gamer you are. If you want a small, portable system with an amazing and very large library of games, but don't care about power, than this thing is for you!

If it isn't for you, get a Switch instead. I will review the Switch in a post coming up sometime this week.

Thanks for reading! Help me reach 80,000 views by the end of the month! View daily, since I make a post a day during the summer. BBBYYYYYYEEEEE!!!