Get or regret?: The 9 Dollar Disney Infinity for 3DS 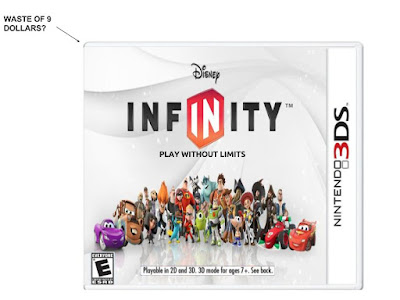 Disney Infinity was a popular crossover game series in which characters from Disney, Pixar, Marvel, and Star Wars would be in a toys-to-life game. Look "Disney Infinity" up, since there is no point of me explaining the premise of the game in this post. The first game of it came out in 2013.

Development of it was cancelled early in 2016. After that, starter kits of the game went on sale everywhere for extremely cheap. It so happened that I came upon a starter kit of Disney Infinity for the 3DS, and it only cost $9 at Walmart. Sounds like a steal, right? Not so fast. I expected a full Disney Infinity game, with building mode and all. This was not that in any means. 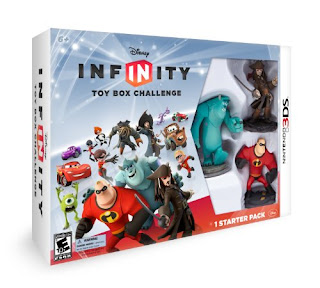 Inside the box, you get the game card itself, a playset piece, a wireless base, and three of the standard starter figures you get in other starter kits.

It was called "Toy Box Challenge" for a reason. It isn't the actual game. It is simply a collection of mini-games. The "Toy-Box" title was misleading, since I thought that it would include that type of mode.

The game itself is sort of like Mario Party, in that it is a board-game based game that is more preferably played in multiplayer. I don't think I could find anybody else to play with who would own this terrible game. Then you are forced to play single player against the CPU.

The game is very boring and slow-paced. The controls for the mini-games are very weird, and only playing a single round of the party mode takes up to half an hour.

I would have given it zero stars, but honestly an image five blank stars would look like five stars. I consider it to be 0 stars.

This game is a waste of $9, a waste of half-an-hour, and a waste of energy even playing the game with your hands in the first place.

I regret getting it, no matter how cheap it is. I wish that I could trade this in at GameStop for a few bucks, but it is so lousy that on the GameStop trade-in website it shows that this game's value is unavailable since no one wants to pay two cents for it.


If you want to play the actual Disney Infinity game, go for it. They sell a full starter kit for Xbox One and PS3 for only about $20. Whatever you do, DON'T BUY THIS ONE.