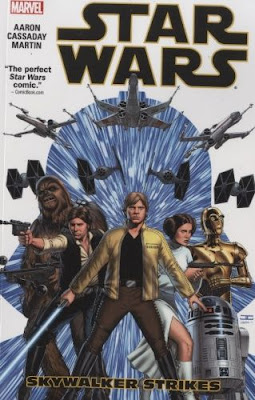 Hello, guys! Last week was the book fair at my school. One of the books I got was a Marvel Star Wars comic and I decided to do a review about it after reading it. The book, titled Skywalker Strikes, was volume one in the series. So, without further ado, let's get started!

I rated it 4.7 our of 5 stars because overall, it is a great book overall. However, some parts don't have a nice flow to them, and it keeps jumping from one place to another. For example, one chapter focuses on Luke and his friends, but another one is about Jabba and another one is on Darth Vader. This can get a bit confusing. If I were the person who made this book, I would put some captions like "meanwhile", or "shortly after" that way we know how much time has passed. But on the bright side, it features amazing drawings that look just like the characters from the actual film, as well as a satisfying and action-packed plot. It even has a shocking reveal near the end that I never saw coming. This reveal will change the way you think about Han Solo before "A New Hope"!
Considering this is all canon and not a legends/Extended Universe book, this made it all the more worth it to read.

What it is about:

Note: There may be some minor spoilers about the plot of the book ahead, so if you haven't read it yet and want to read it without knowing anything about the plot, then I recommend that you skip this part of the post.

The book is a continuation of the movie "A New Hope", starting a few days/months after the destruction of the first Death Star. Now that the Imperial Forces are in disarray, the Rebellion is trying to unleash more attacks across the galaxy to end the threat of the evil Empire once and for all. But it is clear that this will not be an easy task.

The book starts off with Han Solo, Luke, and Leia launching an attack on an Imperial weapons factory. But there atre many things in there way. Jabba is on the lookout for them, DarthVader is chasing them, Boba Fett keeps attacking them, and a stranger is following Han around. How will they make it out alive? Find out in this new Star Wars canon graphic novel by Marvel!

Who I recommend it for:

I recommend it to any fan of Star Wars of all ages, whether they have watched all of the movies or not. This will also appeal to people who like comics in general. Be sure to check it out!

I hope you enjoyed this post! Share it with others  and be sure to view daily for new posts to help me reach 20 thousand views before Thanksgiving.

See you next time! BBBBYYYYYYEEE!!!!!