RIP Stefan Karl Stefansonn (AKA Robbie Rotten)- He was always #1 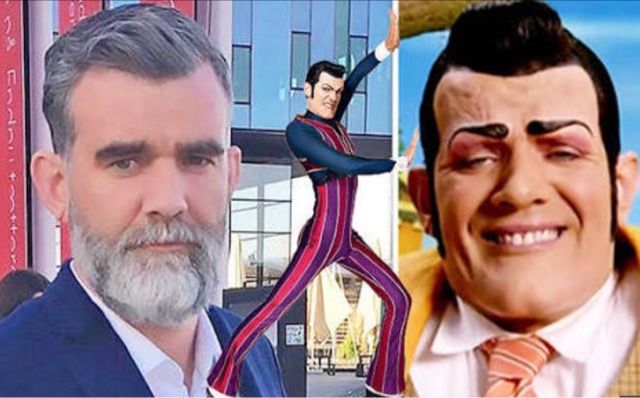 This is Arca, and for the first time in a long time, I have some bad news. Stefan Karl Stefansonn, the Icelandic actor aged 43, has just died of cancer. He spent most of his life as an actor, in some way or another. After staring out early on with theater, he eventually moved on to movies and television roles. His most famous role, and the one that you probably recognize him for, is his role in the children's show Lazy Town.
I personally, as a child growing up in the mid-2000s, have plenty of memories of me spending my days indirectly with him. Not that he was actually with me, of course; My kindergarten days were of a pre-iPhone era, before the preschoolers of the world entertained themselves by means of staring at an iPad screen and being brainwashed by YouTube "nursery rhymes" (actually strange bootleg, kinda creepy content in disguise). Instead, in the years following my ability to speak, walk, and talk, I entertained myself the old-fashioned way: By watching TV.
My afternoons after coming home from preschool were all spent watching kids shows, particularly Lazy Town, which was one of my favorites. In case you didn't know, it's a show about a town in which all the people are trying to live healthy, but there is one person who is quite different from the rest: The show's main antagonist, Robbie Rotten. He's a character with crazy amounts of makeup and costuming that results in a funny, weird, and almost alien-ish look. I used to love watching the show he was in, but out of all the characters, he was undoubtedly my favorite. The ridiculous purple outfit, the weird eyebrows, the humorous villain behavior; Stefan Karl had played the character so well, I ended up loving his character the most. (Maybe his funky design is why I like Waluigi so much. I mean, they do look kinda similar, you've got to admit.)
That is why, over a decade later, I was so happy when the entire internet was set on fire by the Lazy Town meme. Seeing his character on countless YouTube videos, being remixed in all sorts of ways with his iconic song "We Are Number One", made me so nostalgic of my early childhood past. Seeing his face on TV was as much of a staple of my weekends as was ice cream, Elmo, and riding my scooter. Two of my interests, present and past, combined: Lazy Town, of the past, and memes, of the present.
Besides being an iconic kids character and Internet meme, he was also just a great guy. He making children happy, and did plenty of things to try to make kids smile: Everything from his TV show role to founding charities to help children. One of his charities, for example, was directed towards helping to stop children being bullied.
His life and career were all going well, until, in 2015, his life took a tragic turn: He was diagnosed with cancer. He spent three years battling his deadly disease, and people from all over the world tried to help him. Everyone from the members of the cast of his TV show, to fans of his show, to YouTube meme creators, contributed monetary amounts to help fund his various surgeries and operations to help lessen the severity of his cancer. I specifically recall the YouTuber "grandayy" putting s link to donate to him at the end of each and every one of his meme videos. People put up a petition on Change.org to try to get an actual statue of him built in his Icelandic hometown. Word of his tragic condition spread around the Internet, and for once, memes were actually doing some good in the world (by helping raise awareness of his condition, and getting casual Internet-goers to want to donate to him). Memes for good? What a world we live in, am I right?
Unfortunately, on August 22, 2018, his wife annouced publicly that Stefan Karl Stefansonn had lost in his battle to cancer, and died. While this is very sad news, at least he can finally be at peace and not have to worry about his terrible cancer. While he enters his final rest, the world will forever remember Stefan Karl Stefansonn. If he was still here, he would probably insist on still being called Robbie Rotten. I guess that it is sort of like his split-ego. His counter persona. His sercret identity. Regardless of what you call him, he will always still be the same person: A caring, funny, and talented man.
Rest in peace, Stefan Karl. You will always be number one (just like your song).