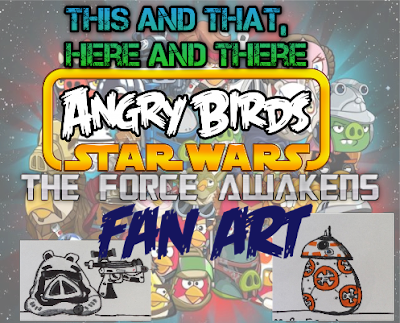 Hello, guys! My school is out and summer is here. I know I promised to make 2 posts a day, so here is my first post for today. I decided that since my parents recommended that since my drawings are very good, and to put them on my blog, I wanted to show you some Star Wars fanart I made.

I am a big Angry Birds fan and the Angry Birds Star Wars games are some of my favorite AB games, and enjoyed watching the movie. When I was playing it, a question came into my mind: What if Rovio made a game for Star Wars: The Force Awakens? This drove me to make some fanart of this cool crossover. 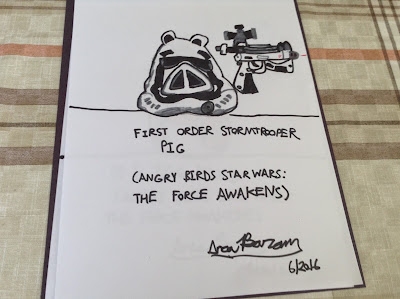 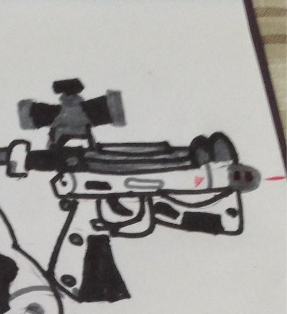 As you can see above, the blaster has a snout in the front that shoots the laser, and piggy ears on top. This was a cool little easter egg that I wanted to add in. 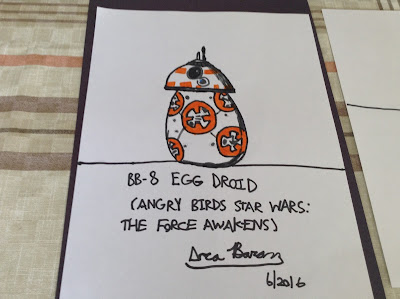 I also did a BB-8 that was shaped like a bird egg. This is a reference to how in the Angry Birds Star Wars games, astromech droids are always shaped like eggs. For example, Chopper and R2-D2 both are in the game, as shown below. 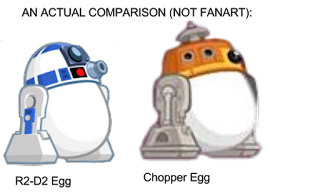 So that is why I made BB-8's sphere part shaped kind of like an egg. Other than that, there is not much of a difference between BB-8 egg droid and the actual BB-8.

The next fanart I want to show you is not Angry Birds Star Wars, but something from one of the most popular Star Wars theory ever: Jar Jar Binks being evil.

I actually made this one a while ago and even made a YouTube video about me coloring it in. 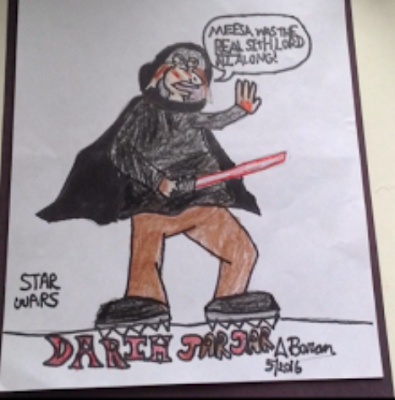 As shown above, in the drawing I made Jar Jar is wearing a black hood and cape, a grey shirt and muddy looking pants. He is holding a red-bladed lightsaber with one and doing a force push with the other. If you look closely you will see that his boots have spikes under them. Remind you of any famous bounty hunter by the name of Fett? He is saying, "Meesa was the REAL Sith Lord all along!"

Below, you can watch my YouTube video about it.

So, what do you think fo these drawings? What fanart should I make next? Please take a moment to answer this Google+ poll about it. The two options that get the most votes by tomorrow will win!
Here is the poll: https://plus.google.com/117393279606783131402/posts/bLk5sFenjug