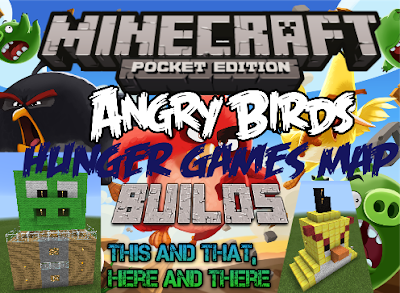 Hi, everyone! This is Arca. Hello again, Josh! ;D
According to the last poll, everybody wanted to see more of my Angry Birds hunger games map in Minecraft PE. So today I will show you the only two other build (other than the Red bird, which was in my previous post), which are Chuck, the yellow bird, and a pig on a structure. 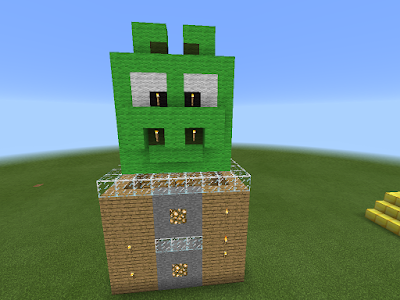 As you can see above, the pig is mostly green. The inner part of his ears and snout is dark green. He is standing on top of a structure that has glass on top, two columns of wood underneath, and stone in the center. The stone part has two blocks of glowstone and some glass inside. 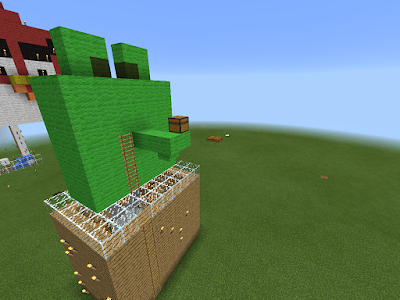 As shown above, the back of the pig has a tail with a chest on top (with hidden items for hunger games). A ladder leads up to this. 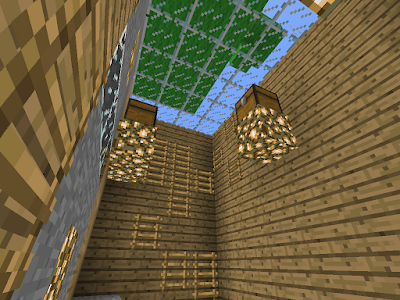 Inside, there is some ladder parkour that leads to chests. 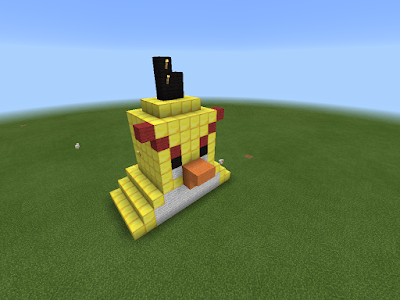 As shown above, my yellow bird Chuck is a pyramid at the bottom, but I failed to do this near the top. His body color is yellow, made of gold blocks. His stomach is white. His beak is big and orange, and his eyebrows are red. He is looking up, at a piggy airplane that I will show you in a later post. His top tail feather is black. 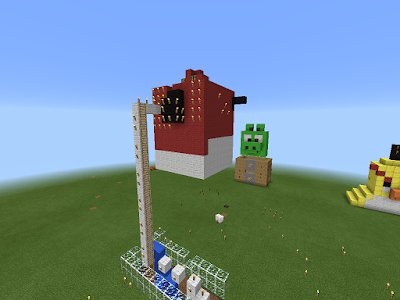 I also wanted to show you the back of my Red bird, which I did not show before. His back tail feather is black, and there is some parkour leading up to the top of him, as well as a big staircase, There is a chest on his top head feather if you look closely.

I hope you liked this post! Take a moment to vote on a Google+ survey about what Minecraft PE Angry Birds hunger games map build I should make to show on my blog next. The two options that receive the most votes by Monday are the ones that I will make and show to you guys! Don't worry if the option you wanted doesn't get picked, I will put the remaining one in the next poll, as well as add new options. Here is the poll:
https://plus.google.com/+ArcaBaran/posts/TMUArZuq94p

Here is my previous post, about a ABSW fanart of  Star Wars: The Force Awakens Luke Skywalker Bird and Unkar Plutt Pig: http://arcabaran.blogspot.com/2016/07/angry-birds-star-wars-force-awakens.html