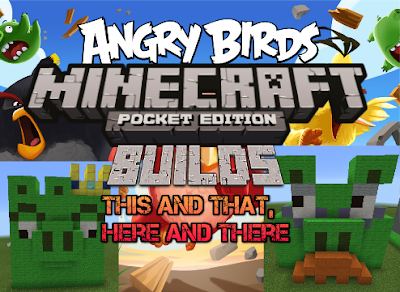 Hello guys! This is Arca. I will two posts tomorrow to make up for not posting yesterday, which was Tuesday. On Monday, I promised you guys that I would show you my Minecraft PE builds of the King Pig and Mustache Pig from Angry Birds. So, without further ado, here they are! 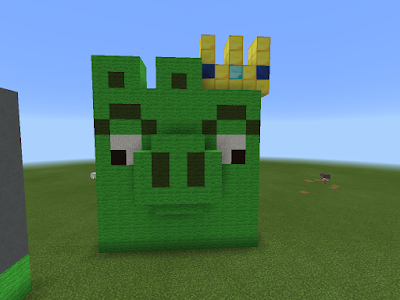 As you can see above, the King Pig has green skin, just like all of the other pigs in the original Angry Birds game. He has a big upper snout that is slightly rounded at the top corners. The nostrils are thin and long and have a dark-green color. His eyes are in a very derpy position, and his eyebrows are also dark-green. He has two ears on the left side of his head that are very close together, with the inner part being dark-green. His crown is made from gold blocks, a diamond block, and lapis lazuli blocks. 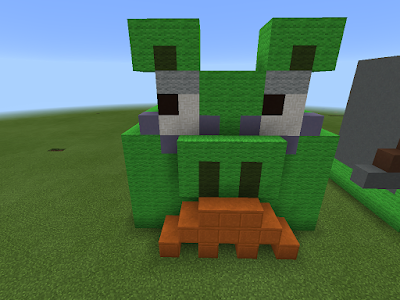 My moustache pig has many things that set him apart from a normal pig, and you can see this above. He is slightly rounder at the top, with grey eyebrows and bluish-purple bottom eyelids. His nostrils are thin and long, and his ears are sticking out of his head. He has a big orange moustache below his snout that is covering his mouth. His eyes are looking in the top-left direction.

My next Angry Birds Minecraft PE builds will come sometime in August after I come back from Turkey. One of them will be the Silver Bird from Angry Birds 2. Another will be a massive version of the Mighty Eagle, which will take a lot more time to finish building. They will both come in one post. Stay tuned!

Here is my previous post, about the features of the final release of Minecraft Pocket Edition update 0.15.0:
http://arcabaran.blogspot.com/2016/07/minecraft-pocket-edition-0150-update.html

Here are my previous Angry Birds MCPE builds, which were the orange bird and pink bird:
http://arcabaran.blogspot.com/2016/07/minecraft-pe-angry-birds-builds-stella.html

I hope you enjoyed. Thanks for reading this and share it with others. Stay tuned for tomorrow's two posts and a post every day of the summer until August. I will see you next time. BBYYYYEEEEEEEEEE!!!!!