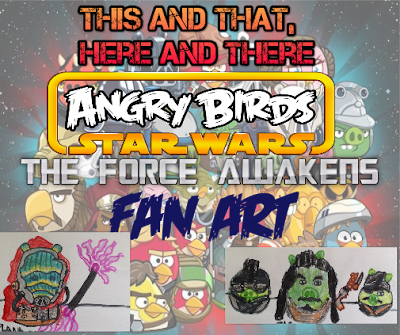 Hello, this is Arca! I have not been posting for more than 3 days because I have a very tight schedule. Not only do I have recreational camp every day, but I have spent a lot of time shopping with my parents to prepare for my trip to Turkey this Friday. I have 5 overdue posts! Whatever posts I do not make before Turkey will be posted after the trip. Now that my announcement is over, let me get into the post itself!

Becuase of the tight schedule I mentioned earlier, I cannot do the Google+ polls. So I will be choosing them for a while. This time, I drew Angry Birds Star Wars versions of some very little-known characters seen in Episode 7. They are Sarco Plank and Tasu Leech. Chances are, you have no idea who I am talking about. I will show you some pictures fo them. 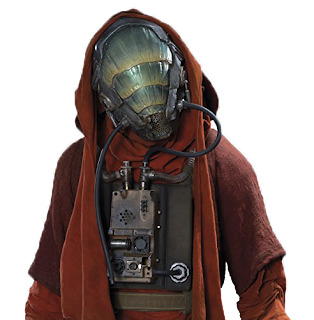 Sarco Plank (shown above) is a bounty hunter last seen on Jakku. Being the Mellito species, he is an insectoid with no eyes. He is an arms dealer who works at Niima Outpost in Jakku. I knew about this character several months before the movie's release. This is because he appears in the canon book The Weapon of a Jedi, which is in the "Journey to Star Wars: The Force Awakens" series of books containing clues about the sequel trilogy. In the book, he makes a deal with Luke Skywalker on Devaron, while Luke is on an important mission for the Rebellion. He eventually betrays Luke in an abandoned ancient Jedi Temple, and they get into a duel. Sarco Plank uses his lightsaber-resistant electrostaff. Plank falls into a deep pit and is thought to be dead after that. We have not yet found out how he got to Jakku. 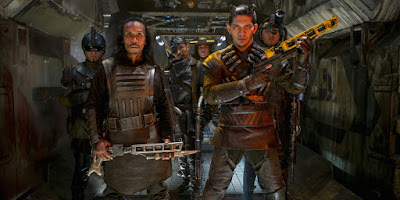 Tasu Leech (on the left side of the picture above, he has long and girly hair) is the leader of Kanjiklub. They are a group of space pirates that have been tracking down Han Solo for the past 30 years. Han Solo owes money to them for carrying their cargo, which he still has not paid back. They are highly dangerous, and never speak Basic. Tasu Leech grew up on the harsh Hutt colony of Kanji.
In case you don't remember what Kanjiklub was (even after reading my explanation), look no further than the internet memes. Don't ask ME why! Just tell that to Kanjikulb!

Without further ado, let me show you my drawings! 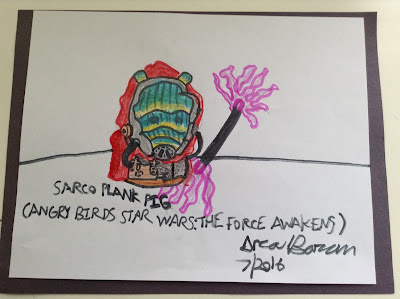 You can see Sarco Plank Pig above. His face has greenish-blue horizontal plates with a bit of yellow near the bottom of each. Even though he has no eyes in the movie, I left an indication of eyes on the second plate from the top. (I kind of regret doing this. It makes him look a lot like Greedo!) There are vertical lines on each plate as well. The two piggy ears are designed like the face plates. His nose is the grey thing below his face. (I think it was meant to be the mouth!) Around the face is some metal parts with holes and latches for the breathing tubes to come out of. There is also something coming out of either side of the head, and I am not sure what they are supposed to be. They may pick up audio. I never knew he had hearing aids...  He has a red cloak and robes. Underneath is a brown jacket with a metal rectangle on his chest where all the breathing tubes lead to. He has an electrostaff with purple electricity coming out of both ends. It is a plain black hilt. 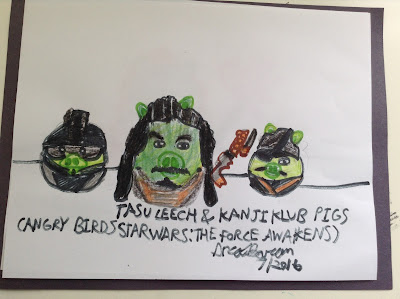 Tasu Leech Pig is in the center of the drawing above. He has long black hair, and a Chinese-style mustache and pointy goatee. His hair has a bumpy texture on top. He has a black shirt with a bronze metal vest on top. Tasu Leech Pig has a blaster with a bronze barrel and metal handle, as well as a knife near the front of it. There are two Kanjiklub members on the left and right sides of him. The one on the left side has a big black helmet covering his piggy ears (that must be uncomfortable!) with a visor over his eyes and a silver and black suit. The one of the right side has a black cap (with ears holes, thankfully) and an eyepatch on his right eye. He is wearing a black suit with some brown striped on it.

Due to my tight schedule, I will not be able to make a Google+ poll for what I will do next. My next drawings will be Lor San Tekka Bird and Bala-Tik Pog and his Guavian Death Gang pigs. Stay tuned!

Here is my previous post, about what 3DS games I got using my extra Eid money:
http://arcabaran.blogspot.com/2016/07/eid-extra-money-haul-gravity-falls.html

I will see you guys next time. BBYYYYEEEEEEE!!!!