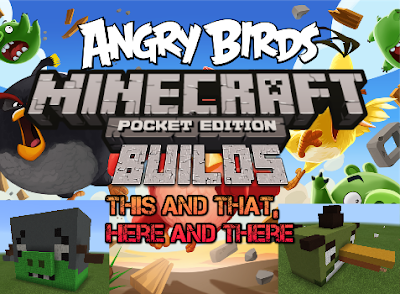 Hello, guys! This is Arca. I will be making two posts today to make up for not posting Tuesday.  According to the last Google+ poll, the two options in the lead for me to build in Minecraft Pocket Edition were Hal the Green Bird and the Helmet Pig from Angry Birds. So, without further ado, let me show you the builds! 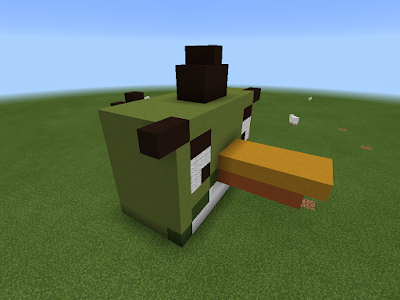 As you can see above, Hal is mostly green. He has a long yellow and orange beak with an overbite on top. His stomach is white with a dark green outline. His eyebrows are very arched and are the color black, and he has three flat black head feathers on top. He has four black pointy tail feathers in the back (although it is barely visible from the angle of the screenshot I took of the build). 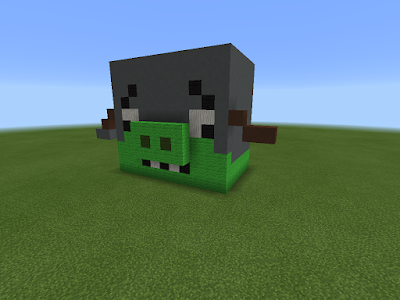 The Helmet Pig I made is wearing a big grey helmet with loose brown straps. He has very derpy eyeballs, with nervously arched eyebrows. Below his snout is his mouth, with some white teeth visible. Like all pigs in the original Angry Birds games, his skin is green.

I hope you liked this post! Take a moment to vote on a Google+ survey about what Minecraft PE Angry Birds build I should make to show on my blog next. The two options that receive the most votes by Sunday are the ones that I will make and show to you guys! Don't worry if the option you wanted doesn't get picked, I will put the remaining one in the next poll, as well as add new options. Here is the poll:
https://plus.google.com/+ArcaBaran/posts/3Wb8aLMZpaM

Here is my previous Minecraft PE build , Matilda the White Bird and the Blue Birds:
http://arcabaran.blogspot.com/2016/07/minecraft-pocket-edition-angry-birds.html