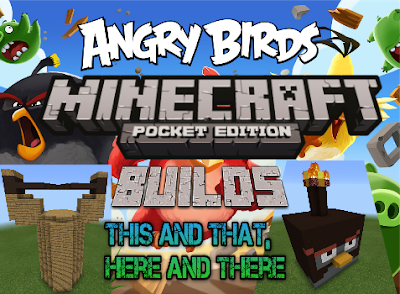 Hello, everyone! I hope you are enjoying the second day of Eid. This is Arca, and according to the last Google+ poll, the two Angry Birds Minecraft PE builds you wanted me to build were the bird Bomb and a slingshot. (The piggy airplane was also tied with the slingshot, but the only vote for the airplane was made by one of my accounts, so I didn't count it.) Without further ado, here are the builds! 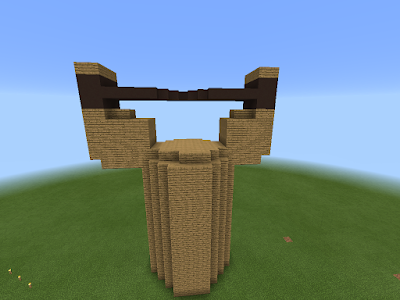 As you can see above, most of the slingshot is made of wooden plank blocks. The base is a cylinder, and two parts are coming out of it. There is a dark-brown band around these parts, which leads to the rubber-band part that you insert a bird into to make it fly through the air. 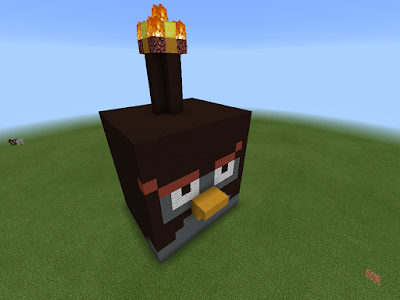 The Bomb bird is mostly black. He has red eyebrows and a grey outline around his eyes. His stomach is also grey. There is a part coming out of the top of his head, and it has a flaming part at the top, just like a cartoon bomb would be like.

I hope you liked this post! Take a moment to vote on a Google+ survey about what Minecraft PE Angry Birds build I should make to show on my blog next. The two options that receive the most votes by Friday are the ones that I will make and show to you guys! Don't worry if the option you wanted doesn't get picked, I will put the remaining one in the next poll, as well as add new options. Here is the poll:
https://plus.google.com/+ArcaBaran/posts/73cudWMey3m

Here is my previous Minecraft PE build , a pixelart of an iron sword and diamond shovel:
http://arcabaran.blogspot.com/2016/07/minecraft-pocket-edition-builds-diamond.html

Here is my previous post, about my first Eid presents, which include a Nintendo 2DS:
http://arcabaran.blogspot.com/2016/07/happy-eid-june-2016-present-haul-i-got.html

I hope you enjoyed. Thanks for reading this and share it with others. Happy Eid everyone! Stay tuned for tomorrow's post, and a post every day of the summer. I will see you next time. BBYYYYEEEEEEEEEE!!!!