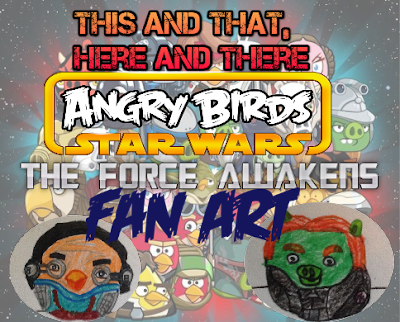 Hello, everyone! I hope you have had a happy Friday. This is Arca, and I am excited for the weekend since that is when I don't have camp and have plenty of time to blog. According to the last poll, the two Angry Birds Star Wars: The Force Awakens fanart drawings that you wanted to see me do next were Maz Kanata Bird and General Hux pig. There was also a request for other (done by Cookie Caffine, A.K.A. Kim, her name in real life), but it was a potato bird, not a Star Wars character. Don't worry, Kim! I will do it, but in a later post that will come most likely Sunday. Anyways, without further ado, let me show you my drawings! 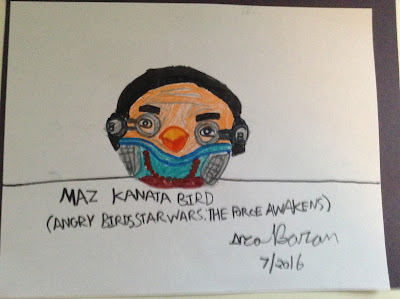 As you can see above, my Maz Kanata Bird has brownish-orange skin. She is wearing a hat thing that is black, and connects to her earpieces. The earpieces have a circle metal base, with sliver parts connecting to a single covering for each eye. He eyes are small and thin, with black pupils. I drew her a orange and yellow beak with an oval shape. He clothing has an aqua-blue colored collar and shirt, with a grey vest showing on each side. She is wearing a brown beaded necklace, and the bottom if her outfit is brownish-purple. 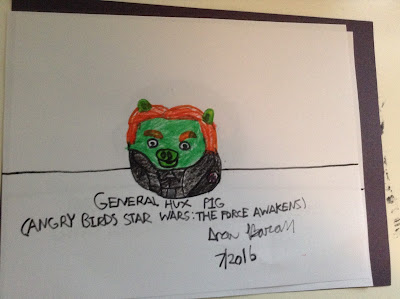 As shown above, I made General Hux pig with his classic reddish-orange hair with the round hairstyle and long sideburns. His eyebrows are also the same color as his ears. He has the iconic green pig skin that all Angry Birds Star Wars piggy bad guys have, with a snout and piggy ears sticking out of his hair. He has a First Order uniform all in black, with a grey belt. If you look closely, you will see a First Order insignia on the right side of his black suit.

I hope you liked this post! Take a moment to vote on a Google+ survey about what ABSW fanart I should make to show on my blog next. The two options that receive the most votes by Wednesday at 4:00 PM  are the ones that I will make and show to you guys! Don't worry if the option you wanted doesn't get picked, I will put the remaining one in the next poll, as well as add new options. I have not been getting as much poll votes recently, so tell others to vote on it too! Remember that you must be signed in with a Google account to vote. Here is the poll:
https://plus.google.com/+ArcaBaran/posts/jDB2MAXNYNX

Here is my previous post, about TTHT blog upgrade 5.0:
http://arcabaran.blogspot.com/2016/07/this-and-that-here-and-there-blog.html

I hope you enjoyed. Thanks for reading this. Stay tuned for tomorrow's post, and a post every day of the summer. I will see you next time!!! BBYYYYEEEEEEEEEE!!!!