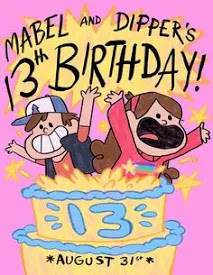 Today is a very important day for all Gravity Falls fans. In the episode "Dipper and Mabel vs. the Future", it was revealed that the twins Dipper and Mabel's birthday was on August 31st! And today happens to be August 31st. Happy Birthday to Dipper and Mabel, the two best sibling cartoon characters of all time!

If they were real people, by now they would be almost adults, according to the show's timeline!

My previous post, about my last two Angry Birds Minecraft PE builds of the Mighty Eagle and Silver Bird: http://arcabaran.blogspot.com/2016/08/minecraft-pe-builds-angry-birds-silver.html

See you next time! BBBYYYYEEEEE!!!!