REVENGE OF THE CHICKEN HATERS??? (#savexiangschickens) 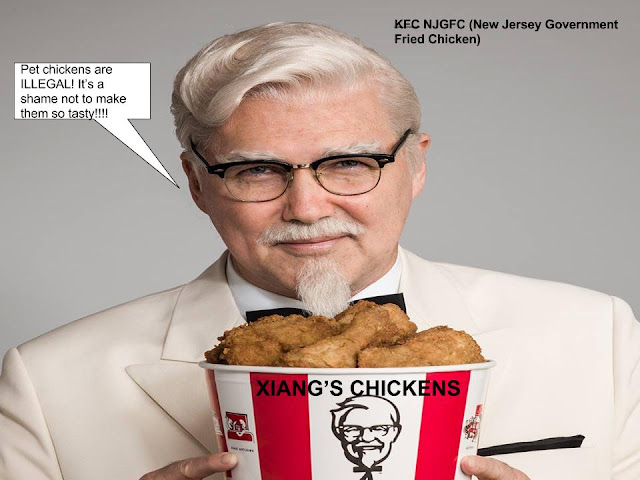 It all started 9 months ago. I have explained this over and over again on previous posts.
Why should I have to re-explain it? Well, I may as well take some direct citations.

This is a quote (written by me, so I am not plagiarizing) from the site of the online #savexiangschickens Chicken Petition that me and my friend Xiang created:

Xiang Meng is a friend of mine. His family has been owning pet chickens for a while. They are getting older. The officials of Marlboro, NJ want to take them away. The chickens have not caused any harm. According to the neighbors, they supposedly walked into their garage. But they haven't actually done so. Even if they had walked near their property, it is as harmless as a squirrel passing by your yard. Yet they are going to be taken away to some farmers. This is unfair since the Meng family has owned them since they were still in eggs. They have become very attached to them. They have the freedom to keep pets, as long as they are not dangerous. They keep them in a cage outside. This petition is for the Mengs to be able to keep their chickens. We only have 2 weeks to have this happen, so spread the news!
(https://www.change.org/p/marlboro-new-jersey-township-officials-let-the-meng-family-be-able-to-keep-their-pet-chickens)

You may be thinking: who in the world keeps chickens as pets? The thing is, Xiang is allergic to cats. His little brother is allergic too dogs. They can't have either. (Not fish either, since they die in a week.)

Anyways, two weeks later, we had gotten more than 390 supporters of this petition. But the local government still took them away. Those poor, helpless creatures were being taken to farms where they would eventually be killed and made into chicken nuggets. This was unfair, since the chickens were meant to live long and peaceful lives as pets for the Meng family, not short and violent ones where they would end up in a person's stomach. Chickens never harmed anyone! Why should they be illegal? They aren't crocodiles or anything like that!

9 months passed since then, and the situation seemed to have been concluded. Done. Finished. It was time to move on. There was nothing that we could do about it anymore. We never heard anything about it again---until recently.

I saw this strange new comment on the petition page: 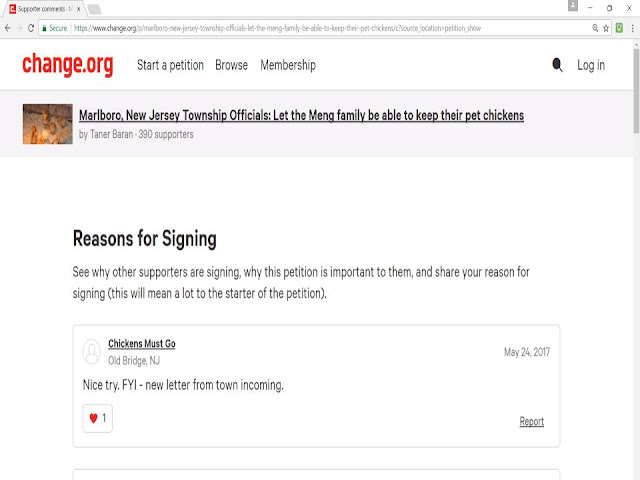 Who is this? What is this "letter" that they speak of? They live in close to me and Xiang, since it is in a close part of NJ. They apparently posted this back in May, but I didn't bother to check back then.

I told Xiang about this, and apparently he has gotten no such letter. Very weird indeed...

One of the anti-chicken comment that was made was coming from someone who lives in Dallas, Texas: 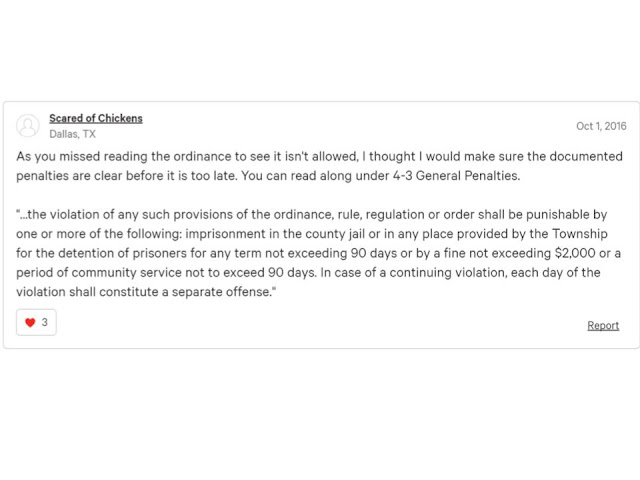 Looks like the punishment for this thing was much bigger than we thought it was. JAIL FOR 90 DAYS?? $2,000 DOLLAR FINE???

This person's name was "Scared of Chickens", which is a silly username to go with.
Why would someone in Dallas even care about what is going on in NJ?

I clicked on this person's profile. Apparently, they made their own petition as well: 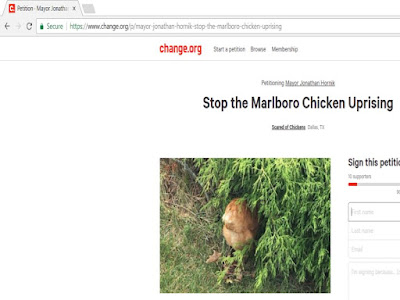 I laughed when I first saw that picture. The chicken butt was poking through the bushes. OH NO! "DANGEROUS INTRUDER"!!

What they had to say to justify their cruelness cracked me up even more: 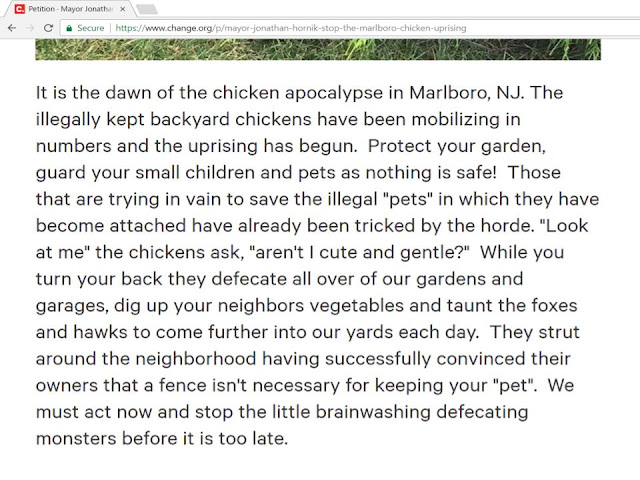 The pooping stuff, "aren't I cute an gentle", strutting along the neighborhood, protect your children... The only reaction I can give is this:
lolololololololol!!!!

I am pretty sure that this is just a joke and all, but if that person actually meant, it... then, well, in the words of Michael Jordan in that old McDonald's commercial:
"Stop it. Get some help."

The supporter had only 9 supporters. Those chicken haters didn't really get the true revenge that they were wanting.

Why? Because we stood up and did the right thing. We tried to make a difference. They tried to sell buckets of dead, fried, chicken body parts for $3.99. We supported a good cause. The only thing that they support is KFC.