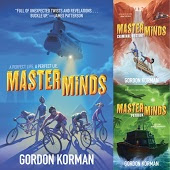 In this post, I will being a review of all three books in the "Masterminds" series by Gordon Korman. I finished the final book yesterday.

Masterminds is an action-packed thriller mystery series with three books in it, all written by one of my favorite authors, Gordon Korman. The first book is called Masterminds, the second one is Masterminds: Criminal Destiny, and the third book that concludes the series is Masterminds: Payback.

Short Plot Summary (Only one spoiler)

There is a town in New Mexico called Serenity. The kids there live perfect, happy, lives, free of violence and bad things. Four kids: Eli, Malik, Hector, Tori, and Amber, are suspicious of their parents and what they are really up to. Everything in the town seems very fishy. Police dressed in uniforms of purple (who the kids nickname the Purple People Eaters) patrol the town, keeping an eye on  these specific kids. The kids find out that they are actually clones of the worst criminal masterminds in history. The purpose of the experiment, called Project Osiris, would be to see if evil kids could still not grow into evil adults if given the right nursery and treatment.

They break out of Serenity, being pursued by the Purple People Eaters, and embark on a cross-country adventure. They steal cars, break into houses, and do anything to survive. Are they becoming the criminals they were meant to be? They want justice for the other clones still under the first of Osiris, and have to endure the worst parents of themselves if they can ever achieve justice and earn a real life for the clones.

Will they be able to pull of their rescue and save all the clones from Osiris? Or will they instead be recaptured and brainwashed once more, forever ending the clone's hope for justice and a real life?
Read to find out!

I think these books are very funny and exciting. These aren't the favorite books I have ever read, but I can't complain about them so I give it five stars.

If you are interested in ever  reading these books, this would be a good time to stop reading.

Its hard to explain the plot of the last two books without spoiling the first one. So I will have the reveal the climax of the first book. If you do not like spoilers, please stop reading! If you don't care about spoilers, click to read on.

The entire story from beginning to end is summarized for the first two books, but not for the third one. 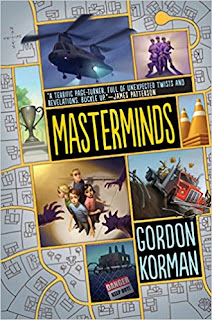 There is a town in New Mexico called Serenity. The kids there live perfect, happy, lives, free of violence and bad things. Four kids: Eli, Malik, Hector, Tori, and Amber, are suspicious of their parents and what they are really up to. Everything in the town seems very fishy. Police dressed in uniforms of purple (who the kids nickname the Purple People Eaters) patrol the town, keeping an eye on  these specific kids. It is a small town, and everybody knows each other.

The kids break into the Plastics Factory, at the center of the town. Inside, they discover that their entire life has been a lie. They are four of eleven clones of the most notorious criminal masterminds in history. Their parents weren't their real genetic parents, they were simply scientists studying them. They were made using DNA samples from criminals. They purpose of the experiment, called Project Osiris, would be to see if evil kids could still not grow into evil adults if given the right nursery and treatment.

They are shocked and upset at this, and want to live a real life outside Serenity. So they escape Serenity overnight by stealing a truck and driving it over a canyon--a very wild escape. One of them, Hector, is seen falling off the car and they assume he is dead. They are chased for a while, until they find cover at a school. The moment that they walk into the school is the cliffhanger ending. 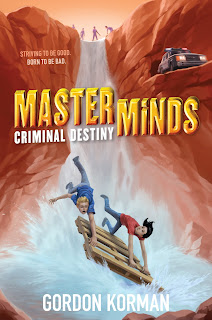 They don't last very long at the school, and soon the Purple People Eaters catch up with them. They steal a police car and escape on a cross-country adventure, breaking into houses and hotels, jumping onto buses, and stealing cars in order to survive. Are they becoming the criminals they were destined to be? They find out that human cloning is illegal. They tell the police, but no one believes them and think they are just a bunch of kids with mental issues. It turns out, the Purples are racking them down using a GPS chip implanted in their necks back when they were born. They very riskfully take them out with a cheap pocket knife, and luckily succeed.

They go back to Serenity to try to find evidence to show to others, which they find is now deserted. Any evidence of the experiment has been burned down. The only thing they can find in the Plastics Factory is a crumbled up list of names. They look up the names online, and find out that these are all the names of famous criminals. They see images of them in their childhood, and find out who each of them are cloned from. Shockingly enough, the criminal that Eli is cloned from is supposedly the notorious "Crossword Killer", Bartholomew Glen.

The only person who could back up their words with evidence is the billionaire Tamara Dunleavy, co-founder of Project Osiris who quit before it officially started. They tell her, but since she is so shocked to see them, she denies everything. They take cover at a hotel, where they find out that Hector (who they thought died in their epic escape from Serenity) is still alive. They have to run away to another person who could give them any evidence: the swindler and con-man that Hector is cloned from, C.J. Rackoff. He is at a prison in Texas.

They find a way past the guest list and visit Rackoff, pretending to be his nephews. Rackoff sees Hector and immediately sees the similarities between their appearances, and tells them that he remembers the day that he was asked for DNA samples for Project Osiris. He only agreed because they gave him a real brownie, which a prisoner serving a life sentence would never get to eat something that delicious otherwise. They help C.J. Rackoff escape prison inside a laundry basket, and then they drive off with a truck.

They are cornered by Purple People Eaters in helicopters. It turns out, it was a trap and Hector was a traitor to his friends by leading them right to the Purples. This was because he was badly injured and about to after he fell from the truck in their escape from Serenity, and agreeing to help the Purples was the only bargaining chip he had. Rackoff is one of the adults in charge of Osiris.

They all narrowly avoid capture at the end. Eli and Tori get away by flying away a helicopter, while Amber and Malik ride a wooden raft of a waterfall. That is the cliffhanger ending. 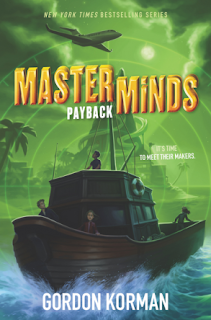 Eli and Tori, and Malik and Amber are now separated into pairs. Malik and Amber track down Malik's DNA donor, the gangster Gus Alabaster. He used to be in prison, but since he has cancer and not much time left to live, he being allowed to stay at his mansion home with doctors constantly at his side. Malik and Amber get in by saying that Malik is Alabaster's long lost son (which is believable because f their appearance and the closest thing to the truth). They try to get information about Osiris, but Malik doesn't want to spoil the truth to Gus until the moments before he dies, since he is very thrilled abut having a "son". After hanging out with Gus and his gang, Malik is starting to act more dangerous than ever.

Meanwhile, Eli and Tori break into a car garage to stay there for a while. They live off of girl scout cookies while they are in there. Eli sees somebody on TV who looks exactly like him, and they go to the production studio of the show in California. Apparently, the kid's aunt happens to be none other than Tamara Dunleavy. The actor and Eli visit the prison in which Bartholomew Glen, Eli's apparent DNA donor, is in. They meet Glen, and Eli is relieved to find out that he isn't actually who Eli is cloned from. Eli is actually cloned from Tamara Dunleavy, the billionaire co-founder of Project Osiris, who turns out to have been a evil hacker in the past. They just changed Eli's DNA to make it the opposite gender so it wouldn't be so obvious who he was cloned from. That is kind of weird, since that means that Eli is technically the actor kid's aunt, in a way.

They are all captured by the police at some point, and they are taken to Tamara Dunleavy. She agrees to give them protection and shelter for a while. The kids are reunited once more, and they are determined to save the other clones from the injustice of Project Osiris. They find out that they have been taken on "vacation" to West Cay, a vacation island in the Bahamas, and it is where Osiris people are hiding since they know they can be arrested if they were still in U.S. territory.

Tamara doesn't give them permission to leave and rescue the other clones, so they do it themselves instead, paying a pilot to take them to a marina in Florida, where they steal a boat and take it to the island using the GPS from a laptop computer stolen from Tamara Dunleavy. Will they be able to pull of their rescue and save all the clones from Osiris? Or will they instead be recaptured and brainwashed once more, forever ending the clone's hope for justice and a real life?
Read to find out!