In the distant constellation of Aquarius, one of NASA's telescopes has spotted a system of seven exoplanets orbiting a small sun. This new discovery was live-streamed earlier today. Even though all of these could potentially have life, scientists are particularly interested in the area known as the "habitable zone", the distance from a sun that has the perfect conditions suitable for life. 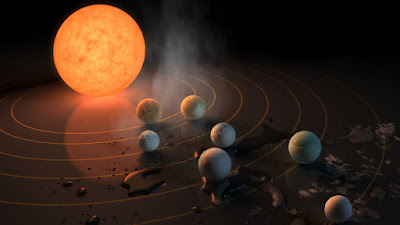 Above is an artist's model of the system. Of these planets, two are in  the"habitable zone".
One of them is called TRAPPIST-1d. This stands for Transiting Planets and Planetesimals Small Telescope in Chile. This discovery also breaks the record for the most amount of Earth-like exoplanets found in one system. 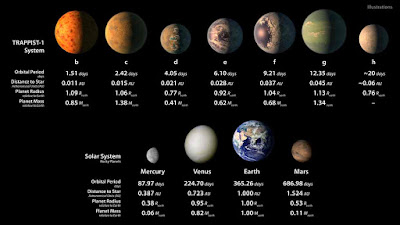 As displayed on the chart above, they have very short and fast revolution periods. For one of them, a year would be only 20 days! 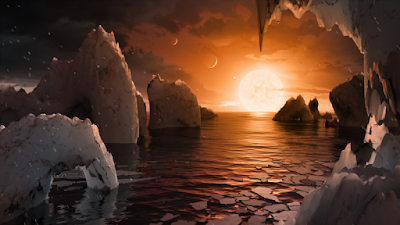 Because of these very short rotation periods, the planets would offer a very beautiful view if you stood on them, and you could see the other planets while they revolve. 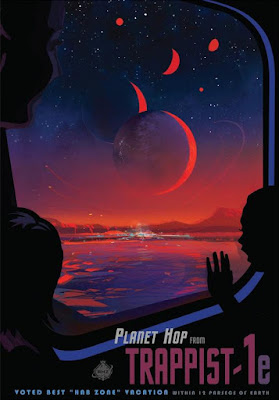 This is a groundbreaking discovery. (Sort of like how last year they found water on Mars and I made a blog post about it.) This means that there could very well be life on these planets.  This is a great leap closer to answering the question if we are alone in the universe. If technology advances enough, then possibly centuries later the planets could be visited.

Google even made an animated Google logo for the occasion. The reaction of the Earth and moon when seeing the planets are pretty accurate to how people reacted when they first heard about it.

But don't just take my word for it. Watch the videos below to learn a lot more about the planets:

They also have a 360 view video below where you can drag your mouse to get a full view of the planet from all angles:

This is huge. Will we finally find life outside our planet? This question will take a while to answer since the telescope is not close enough to the planets to see what is on them. But one day, we may finally get a glimpse of life on other planets, or how people have called them for several decades: aliens.

My previous post, about the declaration of New Zealandia as the eight continent:
http://arcabaran.blogspot.com/2017/02/meet-new-zelandia-earths-new-eighth.html

See you next time! BBBBYYYYYYYYYEEEEEEEE!!!