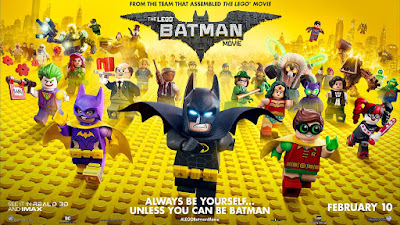 Hi guys today I will be doing a review of the LEGO Batman Movie! I watched it yesterday with my neighbor Young, as well as with my little brother Onur and his friends Justin and Danny. 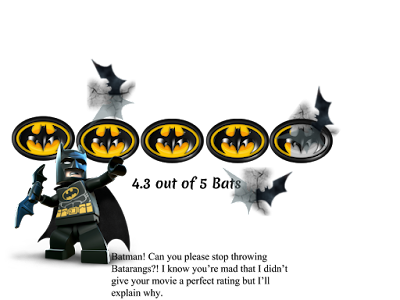 Sorry about that guys. Batman got so mad at me that he threw batarangs all around the picture! Anyways, I chose to rate this movie 4.3 out of 5 bats.

What made you want to do that! I'm Batman.

Yes, Batman. I heard you. And everybody knows your name. You don't have to keep saying "I'm Batman."

The point is, why did you rate this movie that? I, as Batman myself, would rate it 5 BATS!!!

I think the movie was actually pretty good. Better than the original LEGO Movie back in 2013. It had a lot of funny parts in it. It also had some cool references to other superheroes, and even a short appearance from Voldemort himself (from Harry Potter). It also had some nice action scenes. However, the movie kind of was hard to follow at some times. It kind of just jumped from one random event in the plot to another. But other then that, it was a great movie and I recommend that anyone reading this should watch it.

Batman here. Totally not sorry for interrupting, but can I tell them what it is about?

Why should I let you?

I can't argue with that. Go ahead!

As I was saying, I (Batman), was a crime fighter in Gotham City who always worked alone. It was always that way, and I wanted it to stay that way. I never had an actual family, since I am an orphan.

But one day that changed. I met a kid called Dick Watterson who I accidentally adopted (long story) and he wanted to fight crime with me. Meanwhile, the Joker escaped from Arkham Asylum with the help of a Phanthom Zone portal gun. The Phanthom Zone is where all the worst bad guys end up. Voldemort, King Kong, Godzilla, that creepy witch that no one knows the name of, Billy Mays's Beard, yep- they are all there.

It was up to me to stop him. I was forced to work together with others! Me, Robin, Alfred, and Batgirl form a team. But things don't turn out to be the way I expected.

What happens next? Watch the movie, obviously. Be sure to buy popcorn at the movie theater. Superman is allergic to popcorn! HA! Superman sucks. Seriously.

That is all for this post. Share it with other if you like it. View this page often to see new posts every few days. Help me reach 50 thousand views!