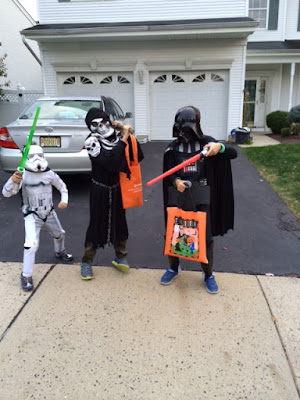 Above: (From left to right) Onur, Neel, and me during trick-or-treating.

Yesterday was Halloween, and me and Onur went trick-or-treating. I was Darth Vader, and he was a  Stormtrooper. I carried a lightsaber, and he also had one, even though in the movies, troopers don't have lightsabers. He decided to pretend he was Luke in disguise. 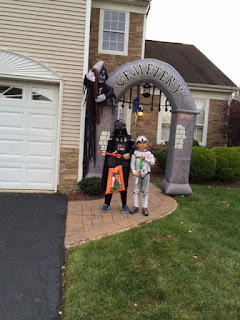 Above: Me and Onur in front of someone's inflatable that says 'cemetery' on it.

Our original plan was to go with Young. We saw him for a little while but then he needed to go to  church, so we started off on our own. We put a bowl shaped like a pumpkin in front of our house on a chair, and wrote a note that said to only take one at a time. 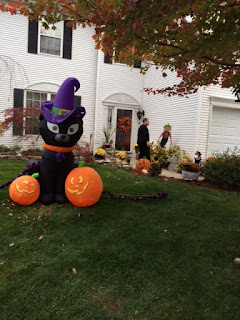 Above: A house that had a giant black cat inflatable in front of it. Say 'meow'!

We first went to the houses that looked the most interesting, such as the ones with many decorations near them. If we ringed the doorbell and knocked and no one responded in 30 seconds or less, then we would move on to the next house, not wanting to waste too much time so we could collect as much candy as possible. 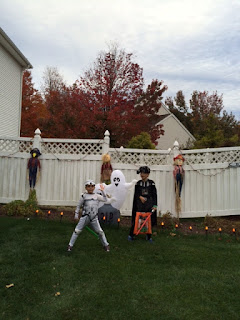 Above: Me and Onur in front of a house that must have spent a lot of time decorating, and had decorations absolutely everywhere. (The photo only shows a portion of it, but it was amazing!)

After an hour or so, we got tired and started to head home. We finished off with some of the houses on our street that we hadn't reached yet. We went with Neel for the final houses and we returned back home. I ate some candy while watching Halloween specials on TV. 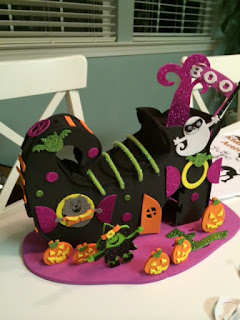 Above: A Halloween 3D craft that we did once we returned home. It is a witch hut shaped like a shoe.

We did some Halloween crafts and listened to Halloween music. Finally, it was time to go to sleep.

I really enjoyed Halloween this year! We collected enough candy to probably last us two months.
I can't wait until next year. Bye!