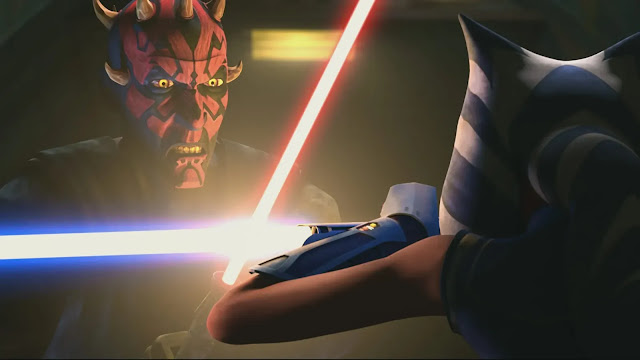 The third-to-last episode of The Clone Wars, ever, released yesterday. I watched it, and today I will be doing a review of it. Titled "The Phantom Apprentice", it is the second part out of four episodes of the final arc about the Siege of Mandalore that actually take place overlapping the events of the film Episode III: Revenge of the Sith.

As a recap of the previous episode, which was titled "Old Friends Not Forgotten" (spoilers for the episode that is before the one I'm reviewing, by the way, by the way), Anakin and Obi-Wan had to go run off to save the Emperor---I mean, *cough cough* Chancellor-- from his Sith co-conspirator--- I mean, Separatist captor---Count Dooku. This, as we know, happens during the movie Revenge of the Sith, and that particular moment ends with someone being decapitated and a particular Chosen One getting even closer to falling to the Dark Side. Meanwhile, what were beloved Clone Wars characters (who weren't yet created, so weren't in the mind of George Lucas at the time of Episode III's release just yet), like Ahsoka Tano and Captain Rex, doing? Well, as the previous episode explains, since Anakin and Obi-Wan couldn't follow Ahsoka to Mandalore to help fight with Bo Katan due to it violating several treatises of the (soon-to-be-replaced) Galactic Republic, Ahsoka had to bring her own legion of clone troopers, including Rex, to help her.

Now, (get ready to read this with a narrator voice, even though the opening narration is gone from this episode) Republic forces led by former-Jedi Ahsoka Tano are aiding Bo Katan in a siege to liberate Mandalore from the clutches of the wicked Maul! Maul, leading multiple crime syndicates (including those we see on-screen in Solo: A Star Wars Story) has them exactly where he wants them, but there's just one problem... Kenobi is nowhere to be seen! With his thirst for vengeance for what happened between Kenobi and him many years ago, he uses his rage and his knowledge of Darth Sidious's plans to resist Ahsoka's plans. That much is pretty obviously set-up by the previous episode's ending, so no spoilers there.

So, as for the episode before. Is it better than the previous episode, which was already groundbreaking in terms of scope, movie-disconnectedness, and story-related high stakes and action? I think so. Action sequences are exciting and continue to be fantastic, the lightsaber duels in particular. In fact, this was the only time I remember this series having literal motion capture(!!!) done by real actors in order to translate the acrobatic lightsaber duel into animated form! That makes sense considering how kinetic and up-close and personal the duels are.

This episode gives you lots of insight into Maul's intentions and motivations after him being yet another poorly-treated apprentice of Darth Sidious, AKA Sheev Palpatine, the Chancellor-turned-Emperor pulling the strings in just about every single major galaxy-spanning conflict in Star Wars. It's all very interesting and you really come to be fascinated with his character, which was already one of the best characters in Star Wars if only for his actual important and non-lack of dialogue in the animated series and one particular A Star Wars Story film cameo (unlike the entirety of his appearance in The Phantom Menace, which gets a reference in the title of this episode, even if he did look very cool and have a cool duel before getting sliced in half).

This episode has lots of important lore events and details, and at multiple points in the episode you get little hints and reminders in the form of hologram FaceTime with everyone's favorite surrogate uncle, Obi-Wan, of what point in Revenge of the Sith the episode's scenes happen during. Not to spoil specifics, but lets just say that when the "Hello there" meme happens, we'll probably get a glimpse in the next episode of Obi-Wan changing his Discord status to "I just shot some cyborg dude in the chest who was coughing a lot and then he caught on fire".

The action is exciting, and despite Star Wars fans knowing exactly how tragically that all of this will end knowing what goes on during Episode III and comes to pass by the time of the original trilogy, you still care about what happens to these characters who we've watched for a long time and grown connected with and invested in as an audience. It yet again makes people like me ask the question, "If such a good piece of media the length of a film was able to be made about the events of the prequels, then why did much of the prequels turn out the way it did?" I still was on the edge of my seat at multiple moments during my viewing of this episode with my little brother on Friday afternoon, and I suspect that it will all culiminate in an explosive finale that will knock all of our socks off in the remaining two episodes, and also let us hear these three chilling words spoken with more emotional context than the prequels could ever give: "Execute Order 66."

On a side note, the animation, down to its lighting and the kinetic motion of the characters, is actually noticeably better than usual. So yeah, this episode is phenomenal and then some. If I had to give it a score from 0 to 100, I'd give it a 95. That's potentially the flipped version of a score I could have given a live action Star Wars film with the word "clones" in it. So yes, you should go watch it. Now. I have spoken.

That's it for this post. I hope you're all staying healthy and safe. A massive thanks to all of those who are helping things get better! Happy Ramadan, or Ramadan Mubarak, for those who celebrate it. This is Arca, signing off. May the Force be with us all.