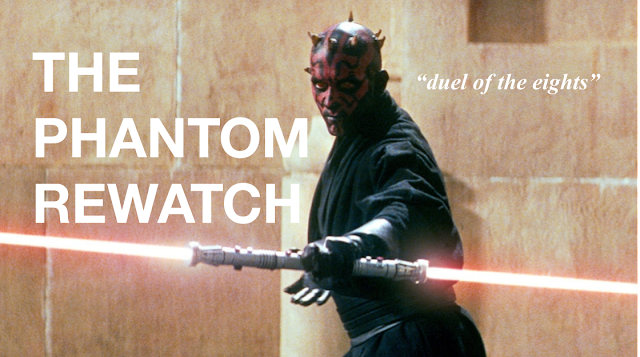 Note: This is Day 2 of my new daily blog series, Arjay's Anti-Internet adventures, which I explained in depth in this post: http://www.arcabaran.com/2019/12/arjays-anti-internet-adventures-day-1.html

This is also the beginning of my Star Wars Skywalker Saga re-watch, in which I will be re-watching all of them one by one and giving a short review in retrospect of them before I get to see the finale, Episode IX, The Rise of Skywalker. We start out with none other than the first prequel film that released in 1999, Episode I: The Phantom Menace. It is considered one of the most disappointing movies by some fans who look back today, but plenty still loved it and praised it on its release, citing George Lucas as a film-making genius who hadn't yet lost his touch. Today, I re-watched the film for maybe the third or fourth time, and I will discuss my thoughts briefly. Mainly, I seek to answer the following questions: Was it worth the over-15-year wait when it released? What are its biggest strengths and weaknesses? And, finally, is it a good or bad movie overall? Of course, this will contain spoilers if you still have waited nearly three decades to watch this movie for some reason. Let's begin discussing the first film in the "duel" of the eight Star Wars episodic films before the finale.

The movie set out to provide the start of an "origin story" for Anakin Skywalker, AKA the galaxy's biggest bad, Darth Vader. Darth Vader always looks sleek and cool and terrifying with his menacing tone and behavior, his mysterious armor and mask, and his Dark Side Force powers that included being able to choke whoever annoyed him to death while only raising a finger. So you'd think that his origin story would start out in a dark, scary place full of scum and villainy, correct? Actually, nope. The one born from a location scum and villainy would actually be Han Solo, as last year's Solo showed us. Apparently, papa Vader came from no place other than sleepy, moisture-farming Tatooine.

His childhood definitely wasn't all puppies and rainbows and power converters, as this movie tries to make a point of. He was born into slavery by a cruel alien named Watto (who actually looks plain stupidly goofy in this movie... but that's a pattern here) to a single mother named Shmii, and spends his days wishing to travel the stars. Sound like another Skywalker you know of? But lucky for him, a pair of robed Jedi just happen to show up at his planet after they talk about taxes and such with a pair of green-skinned doofuses. Seriously, does this film want us to take it seriously? Apparently not, as its lead character is a six-year old and that's also the target audience of Star Wars in general according to Lucas himself, so perhaps I should stop pointing that out... Wait a minute. Jar Jar Binks isn't the evil mastermind behind the entire saga? Dang, the fan theories have all gone to waste. Back to the Supreme Leader Snoke dumpster they go.

So, not only did Lucas have the bold creative vision of starting out the firm film in his franchise in over fifteen years and one of the most anticipated films of all time with two space ninjas bursting in on politics ("taxation of trade routes", anybody?), but then he littered these elements that only adults would be able to understand and fall asleep about with CGI cartoon characters so that suddenly only kids can make sense of it? Gee, it's almost as if this movie were struggling to live up to one central theme or concept...

One moment you're watching child Anakin engage in a fast-paced podrace with a bunch of weirdo aliens with Jabba the Hutt watching (he fell asleep, too!), the next you're seeing a bunch of alien politicians in a space senate talk about a trade war. This movie had a few tasks to do: Just set up Anakin Skywalker's childhood and how he met up with the Jedi, and also make it a fun and approachable movie for new fans to pick up on, seeing how it's even called "Episode I". But instead, it failed to show what the world of Star Wars was truly about, didn't capture as much of the practical effect magic of Lucas's previous efforts in favor of what was considered to be mind-blowing visuals for the time, and started out quite dry while suddenly deciding to go out with a big bang and a punch (with literally another giant space station being blown up and a big celebration ceremony for it... A New Hope?).

The movie fails at being like the original trilogy, though to be fair, many have argued that this wasn't Lucas's goal or intention. The original movies take place after the Empire's crushing of all hope in the galaxy, and thus the tone would be much darker. That still doesn't excuse the emphasis on fart jokes over sufficient story-telling. Many angry fans complain about The Last Jedi having too much "Marvel humor", but I found those jokes to be mostly enjoyable (yes, even the space cow milking scenes) and legitimately able to be funny for anyone over the age of four. While I'm not saying that such a child-friendly film should be forced to not be goofy at all (even the original Star Wars was goofy...), it should still make efforts to appeal to the wide age-range as a whole instead of just small children.

Another weakness, besides the poor humor and the over-reliance on much less magical computer-generated imagery (technical achievements aside), would be most of the characters. Star Wars, even today, is known for strong and interesting characters. The original trilogy had the scoundrel Han Solo, the trusty copilot Chewie, the wise old Jedi Obi-Wan and Yoda, and many more. Even the villains, while many of them were faceless, were interesting. The new Disney-led projects have characters such as Kylo Ren, Finn, and "The Child" in their favor. Again, these characters are enough to make the storyline enjoyable. However, The Phantom Menace's interesting characters can only be counted with one hand. Anakin (somewhat, even though we know his epic legacy), Obi-Wan, Qui-Gon, Maul, Palpatine, Yoda... and who else? While Padme get somewhat more interesting story-wise in the later films (sometimes-awkward acting aside), she got literally no moments in this film other than fourteen-year-old her and kindergartner Anakin happening to be in the same room together. Woo-hoo.

However, all the negativity aside, I still do enjoy this film. I do not hate it whatsoever. It is very well-made and mostly interesting in the later acts. The musical score by John Williams was phenomenal as to be expected. I especially liked the subtle moment where when Yoda voices his doubts about training Anakin (something along the lines of "I sense a great danger to follow in training him...), a hint of the melody to Darth Vader's iconic theme plays in the background. Moments like these are what complete the poetic nature of the films, which the literally beat-for-beat recap of A New Hope, The Force Awakens, even failed sometimes to convey as beautifully. The choreography involved in the final lightsaber battle still makes it one of the best duels to date, and Darth Maul is still one of, if not the coolest, character in the entire prequel trilogy of films. The Duel of the Fates soundtrack still manages to give me goosebumps, and the martial arts movements still are stunning.

So, to answer one of the questions I set out with, if I were to watch this movie when it released (I wasn't yet alive when this happened, of course, by half a decade), would I think it would have lived up to the hype and the wait? The answer would probably be mostly, yes. I would love the ground-breaking special effects at the time, the cool world-building and lore (that Jedi Council stuff still is exciting), and the final duel. I would have no movie to compare it to other than the original trilogy of films, which I would most likely call this film either inferior to all of them or tied with Episode VI. The truth right now, however, after almost three decades later, and with the luxury of being able to re-watch and stream it on Disney+, I think it is worse than all of the franchise's live action films thus far except for Attack of the Clones, which I will re-watch next. If I recall, that movie was much, much, worse with many less strengths to compensate for its weaknesses. As a verdict, I say that it is overall only a semi-satisfactory start that leaves much to be desired for the prequel films that would follow, and is therefore neither a good or a bad movie. It fails to feel special or interesting in the ways that the original trilogy films all did, and the characters are mostly boring and just excuses to make goofy jokes (i.e. Boss Nass, Watto, and the Trade Federation morons). Jar Jar Binks, contrary to popular opinion, is someone who I actually found to be funny on many occasions due to just being plain fun and childish, something the series sometimes tries to set aside to its detriment. I do think he may have been overused quite a bit, but his inclusion doesn't at all warrant the toxicity of many fans about him, especially at the expense of the very talented actor portraying him, Ahmed Best.

I declare that Star Wars: Episode I- The Phantom Menace is therefore an overall average movie definitely worth watching, but not if it's your first Star Wars movie (the best one to start with still is, and always will be, 1977's A New Hope). I would rate it, on a scale of 0 to 100, a 75%. I have spoken.

That's it for Day 2 of my "Internet-less" adventures, and also for my re-watch of the first sequential film of the Skywalker Saga. See you next time! I'll be signing off for now.