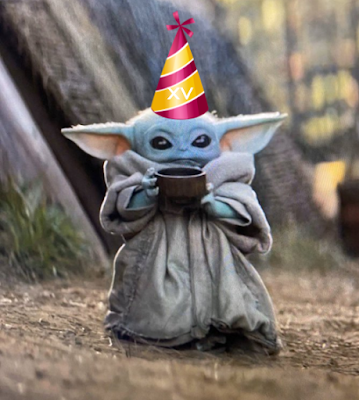 It feels like every single post I make nowadays is about a celebration or special event, since I never get time for anything else, but I don't want to complain about that this time. Why? Since it's the most wonderful time of the year, and my favorite winter holiday: My birthday!

To say that yesterday, my birthday (the post publish date says my actual birthday day December 12, even though technically I'm writing and publishing this the day after, December 13th) was a bit unusual would be an understatement. I woke up, ate some eggs and breakfast, and then walked to my bus stop. Pretty normal. Then, I slipped on some ice on my way to my bus stop, which is two streets down (I got back up and was fine). Then, I went to school and my first class was English. We spent most of our time in class reading. Again, also pretty normal, except that this time it was under the label of hygge- A Danish tradition for having fun. So in other words, some people were allowed to bring in hot cocoa and pillows. Since I'll be doing that until winter break, that's also pretty normal.

But then, I took a bathroom break right before the period was over. Then again, also pretty normal. But then the lady on the intercom to our school told us to immediately go into lockdown, making it the first time in six years that I had to stand on top of a little toilet in a stall for five minutes. That's somewhat unusual, I'd suppose, judging its non-frequency. But wait, it gets less normal from there.

While it was a drill, we don't know that until we get the signal that it's over. However, the way that this is done is in a fashion that is easier for those inside classrooms. Not those who spent ten minutes on top of a toilet in a stall, trying not to flinch and make the little motion sensor flush go off. Instead, I had to wait there a full extra fifteen minutes or so until a school counselor finally walked in and said, "Anyone in there? The lockdown ended."

But until I found out those beautiful words, the thing to finally let me take my bio test that I knew would mark the moment of good riddance for any stress on my birthday, I had to wait for literally 900 seconds inside a stall in a bathroom completely lit up. Legs shaking, every second feeling like five. I felt like Jyn Erso from Rogue One, crouching under a small piece of metal as every footstep nearby was assumed to be an Imperial Trooper (or every person who went in to take a pee a grown man dumping a water bottle in a sink).

I had no idea that it was a drill. It extended literally double-and-a-half times the duration it was meant to for me. Beside my pounding heart and shaking legs, the worst part was when some poor kid just walked in to empty his bladder. I flinched so hard whenever the door slammed open that I triggered the auto-flush. Not exactly a normal stay in that one bathroom that's super pristine near the chem lab since no one uses it and no one even thinks it exists. Which made my encounter with that kid's urination noises in the middle of what I thought was a lockdown even more unusual.

Hey, I also turned 15 years of age at the very moment that I was in that stall. So there's that, I guess. I had started new years of age since sixth grade while usually taking a math test (each time at 9 AM, that's what always happened), and was planning to start a bio test this time with an added 15-year-old brain boost, but I was a bit late to start that right away, for obvious reasons.

But even as I walked out awkwardly, still shaking, clutching my books and strolling down the empty halls as if I was late to school (by 70 minutes) and had a doctor's note, the unusualness didn't stop. I walked into my bio class, and the teacher immediately knew what happened to me before I could even finish my sentence. Hey, I guess that remark one of my teachers had about us not being college students and actually needing to raise your hand to go to the potty was not for naught. My other teacher probably let him know.

And I took the test. And then I went to math, with a substitute teacher, which was a welcome gift and true moment of hygge after the complete opposite had happened for me 80 minutes prior. And then I went to lunch, which was lunch, and alright, I guess. And then I had two other classes, and it was alright and pretty normal, lack-of-homework aside. But then, once I finally burst out of school and arrived home, well, as Anakin would say, "This is where the fun begins."

Due to not actually having any homework to do today for once, I walked upstairs to my room and saw this: 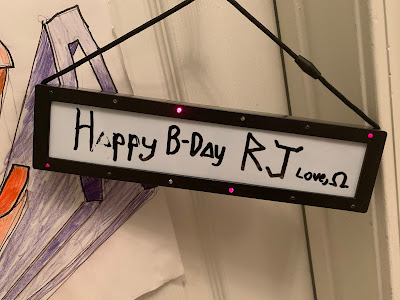 My little brother wrote that on an alternating light-up sign he bought from his school's holiday boutique for me the day prior (coincidence? I think not!) and hung it up for my birthday. But thankfully, that wasn't the only gift he gave me for my birthday; he had a winter holiday concert at his elementary school that night which I got to watch. (I remember the exact day which I had that exact same concert when I was his age.) Of course they sang Jingle Bells and other festive songs, but the best part was when he got to play his instruments. Specifically, percussion and cymbals. He just about stole the show with his exaggerated and elaborate motions with his cymbals, and it's really hard to describe in words here, but the amount of praise he got for it and just how fun it was to watch him rocking it out to the beat... perfection.

Then, at home, I played some Splatoon 2 and Steep, started writing this blog post, and ate some cake as well. It was a pretty solid birthday overall. But the coincidental events that happened on that day outside of my daily life were also somewhat interesting as well.

Most importantly, the Game Awards 2019 took place that night. I only got to watch the intro and about twenty minutes of the livestream on YouTube. I got to see some lady singing as an intro, then a weird trailer of another lady rapping for some new horror game, then a grown man named Phil Spencer saying that the next generation of Xbox is called Series X and will release next winter and then also showed off what the controller and console look like----wait a minute, they saved such a big reveal for the boringest Game Awards in history? Wow.

I woke up the next day (technically, today), and quickly looked up who won GOTY. The nominees included Smash Ultimate, Death Stranding, The Outer Worlds, Sekiro, and more. I was rooting for and expecting Sakurai's hard work and final best celebration of gaming as a whole, Smash Ultimate, to win. But... nope. At least Smash Ultimate got best fighting game. Sekiro grabbed the GOTY out of left field. Then again, the past two GOTYs were also kind of out of nowhere and underdog picks (like 2018's being God of War over the likes of Spider-Man, even though Zelda taking the cake in 2017 was obvious). Luigi's Mansion 3, which I voted on their official website on the poll for best family game, did happen to win best family game over Smash Ultimate, which I was happy about. It may not be the "better" game but it did deserve to win at least some sort of award when Smash was guaranteed it in some other category anyway. From what I've played of it so far, it was very fun and shiny and full of that Nintendo charm, with all of its humor, aesthetics, and gameplay.

I also found out that the show was even more boring than I thought. While Microsoft clearly went all out with their Xbox reveal of all things, Nintendo and Sony were admittedly more modest. So sorry, no 5th Smash DLC pass character reveal, even though we all expected that after the bombshell that was Persona 5's Joker getting revealed a year ago at TGA. But oh, well. They'll have to reveal it within the next few months, anyways. Admittedly, us fans need to be patient for once.

Then, today (or the next day... or... this is getting confusing, let me say it: Friday the 13th), the sixth out of eighth episode aired for the first season of The Mandalorian. I watched it, and not to spoil anything, but it was definitely more interesting than the prior one (although less blatantly fan-servicey) with lots of action and interesting moments. Not exactly filled with that many big plot reveals, but seeing as we've only got two episode left and they're confirmed to somehow tie in with the upcoming movie finale The Rise of Skywalker, it's only a matter of time before they say something like The Child is the reincarnation of Emperor Palpatine or something big like that.

So, now that I told you about my 15th birthday and the day after, you  may be wondering: Will I have a party? The answer is, yes, but two full weeks afterward. You see, I am going to be inviting only a few friends over to a jam-packed movie theater for the new Episode IX. Except not on opening night, but... a week later. That's since the day it releases, the 20th, is the same night that my parents planned to start my first ski trip in two years in Vermont. So in other words, in order to avoid literally all spoilers for the conclusion of a story 40 years in the making (sorry, Endgame), I am going to do something that many people are probably jealous of: Hibernate from the Internet for two weeks.

That's right, that means no Discord, no YouTube, no Google search, no checking my personal Gmail, no checking blog comments, muting all my phone notifications--- you get the drill. Normally, my spoiler hibernation would only have to last a day or two since I'd usually get to see the movie as early as possible, but this time, circumstances are different. Even though the movie isn't in theaters until this upcoming Thursday late at night, the red carpet premiere will be this Sunday, which will make avoiding leaks even more difficult. Luckily, I will be on a vacation that will require me to be online as little as possible anyways, since it's a ski trip. I plan to be spending my downtime at the hotel reading books and playing on my Switch (no online gaming either, lest others' Rocket League usernames are something like "RIP_CHEWBACCA_58"). Kids these days...

So in other words, this will be the last blog post you will see from me in a while. I will even turn off email reply notifications for pending comments, since yes, I'm that paranoid. Unlike The Last Jedi, which I went in being already spoiled for quite a few things, I want to go into this even fresher than The Force Awakens. So until then, see you. I still have a few vlogs to upload on The AABO Show that are in progress (namely, Thanksgiving Part 2 and a possible NYC video), but I'll basically do nothing but upload them and then leave YouTube while squinting my eyes and covering my ears (those ads nowadays, am I right?). I won't check comments either.

Until then, this is Arca, signing out, and may The Force be with you all.