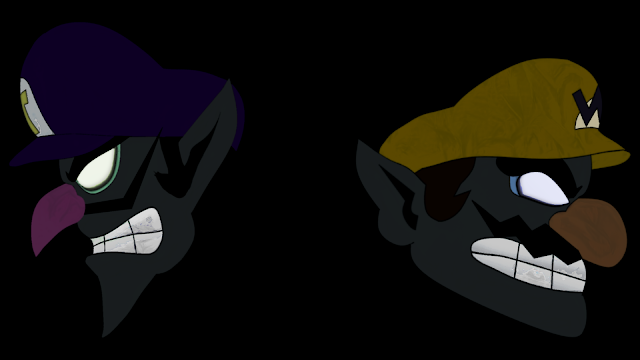 This is the forbidden second chapter of the tale of the life of a very strange purple gentleman. A chapter that took over a year to come into fruition, despite how popular the first chapter was (if you haven't read it yet, you can see it here: http://www.arcabaran.com/2018/07/waluigi-tales-chapter-1-dark-beginnings.html). When I started this tale, my intention was to dig deeper into the backstory of an enigmatic underdog of the Mushroom Kingdom, one who doesn't get respect from anybody, even by the company who created his character. So I did what any person in my situation would do: Send Waluigi Mario an email. The adoptive member of the plumbing/kart-racing/super-smash-fighting Italian superhuman family isn't very keen to respond to such public things like this, of course, due to his shame at still not having a proper game of his own. So after he sent me a very revealing email message (which I copy and pasted into the first chapter of this story), and he found out how many people had seen it, he was extremely reluctant to send me another email at my request for more information about the tale of his childhood continuing from when Mr. Wario Mario broke him out of his orphanage.

I emailed him in August of 2018. I received no response whatsoever until early September of 2019, just a few weeks ago, and up to that point, I had already assumed that this story series was dead and that I'd have to make up facts about his life for views rather than do legitimate investigative journalism. In my email, however, I didn't exactly get what I expected. The email went as follows (please bear the annoying purple font, that's how all messages from Waluigi appear by default):

I'd like to thank you so much for the blog post that you WAH-rote about me last year. That was so kind of you. I never understood WAH-y people never bothered to hear the story of my life, and WAH-y Nintendo was so stubborn about refusing to let anyone know about it. I guess I WAH-s WAH-rong about people not caring, thankfully, so thanks for getting the story out there! I was just WAH-dering... do you plan on following that post up with the story of the rest of my childhood, after the point where WAH-rio found me? I was busy the past year (don't ask why), and still am, since I've got a big secret project coming up. If people knew what it WAHs, they would go crazy. So how about you leave the rest of my story up to my adoptive uncle, WAH-rio? Here's his email address, if you WAH-nt to contact him: misterwario@warioware.com. Please mind all the poop humor; it's just a Wario thing.

So, of course, I emailed his old pal Wario (AKA Xiang) to hear the yellow lad's own stinky (in a good way) interpretation of what happened immediately after he picked Waluigi off the cold, damp streets next to his orphanage. Enjoy! Please note that I tried to not edit as much as possible from what he wrote, but I did provide him a bullet-point story outline in advance. Xiang chose not to follow all of it, but took it and did whatever he wanted with it. I think it turned out quite interesting... and the toilet humor actually matches Wario's canon personality, if you catch my drift. (The image credit goes to me, but the writing is 99% Xiang's.)

So after I pick up little Waluigi, I vowed to show him the Wario Life (A.K.A the poop life). I brought him back to my poop hut and showed him my poop monument.

“See this?”  I said pointing to a picture of myself, “Bend down to one knee to pay respect.” I watched as he slowly kneeled, and satisfied that he was done, I nodded and he got back up. I led him to a pair of pictures, full of poop stains.

“Now see this?” I said, disgust oozing out of my voice like diarrhea, “This is poopy.” I took a jar out of the shelves that lined the shelves.  The jar was filled with sludgy brown stuff (poop, if you didn’t take the hint). I ripped open the cap and took a deep whiff.

“MMMMMMH (I couldn't have written this if I wanted to-- Arca), the smell of some nicely fermented poop. Perfect for throwing,” I said with malicious intent. I grabbed a handful and threw some at the pictures, the poop landing squarely on Mario’s face. Waluigi, taking the hint, grabbed a chunk and threw it at Luigi with surprising power. After taking a couple seconds to admire our handiwork,  I proceeded to show him the rest of stuff in my house.

“On the jars on the shelves are all different types of poop: Spicy poop, sweet poop, sticky poop, smelly poop, dangerous poop, acid poop, flaming poop, wet poop, etc.,” I listed with pride, “But here’s the best part.” I pressed a button and out of the poop floor rose my glorious poop motorcycle.

“My fully functional poop motorcycle (it’s yellow and purple poop)!” I exclaimed, “I even have a mini trunk for storing my bowling clothes and ball, as well as our poop food and weapons.” Waluigi stood there in wonder, awestruck by my amazing poopcycle. I turned my back on him, prepared to make my epic speech, but out of the corner of my eye, I saw Waluigi reaching forward to press a red button.

“NO, DON’T TOUCH THAT!” I shrieked. Suddenly, a speaker inside my poopcycle sounded.

“SELF-DESTRUCT IN 5… 4…” I quickly recited the password to the poopcycle: "Pooop poop pooooopy-pooop pooop poopity poopy poop!" The timer stopped. I breathed out a sigh of relief. I was really triggered, but how could I really scold little Waluigi? I took a deep breath.

“Okay, moving on... Here’s the most important part,” I said, “My life goal is to destroy Mario… at tennis. But I can’t do that alone because that poopy-head always insists on playing doubles with Luigi.” Waluigi, previously picking his nose, now looks up in interest.

“Now here’s the plan. YOU are going to come with me to beat those nincompoops at tennis at the tournament tomorrow, and we are going to train for a day because we’re too good. I will show you DA WAY.”


TO BE CONTINUED... (by Xiang again? Or by me? Or by someone else? Let me know in the comments below!)