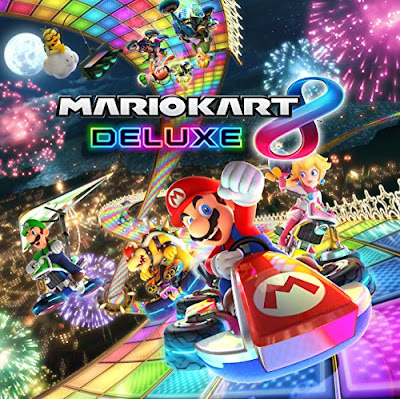 Today I will be reviewing the game Mario Kart 8 Deluxe, released for the Nintendo Switch. 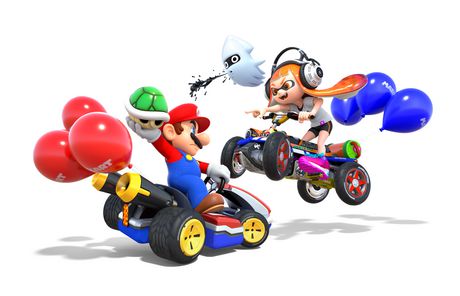 The game is a Switch port of the Wii U go-kart racing game "Mario Kart 8", which was released back in 2014. It is the same as the Wii U version, but with improved graphics, and some added features to make it the "Deluxe" version. 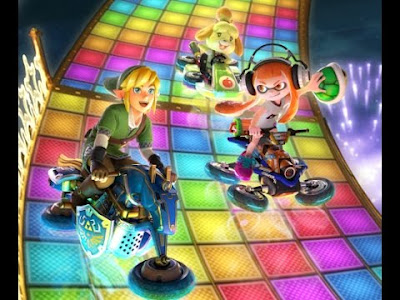 First of all, they added new characters, which include characters from the Animal Crossing games, Link from The Legend of Zelda, and Inkling Boy/Girl from Splatoon. Second of all, there is the 200cc race mode, which is unbelievably fast (you'l need to brake often in this one). A cool new things is also that you can hold two items at once before you use them.

Smart Steering is a helpful addition for newcomers to the game, though it is hidden in the menus where it can be toggled on/off. I don't use kt myself, but I turn it off for friends or family members playing multiplayer with me that have either never played a racing game before, or who are little kids. There is a motion controlled tilting option for the Joy-Cons, and they even sell Steering Wheel attachments for them separately. The tilt controls aren't very precise, so I hardly ever use them, but it is cool for feeling like you are actually driving the car,

If you have a collection of Amiibo figures, then this game will put them to good use. Certain Amiibo figures unlock certain Mii character outfits when you scan them in. I was excited about this since I happen to own a super-rare Gold Mario amiibo. Unfortunately, it only gives you a regular Mario suit in the game. In order to actually unlock Gold Mario as a playable racer, you have to complete 200cc mode (a very difficult task indeed). 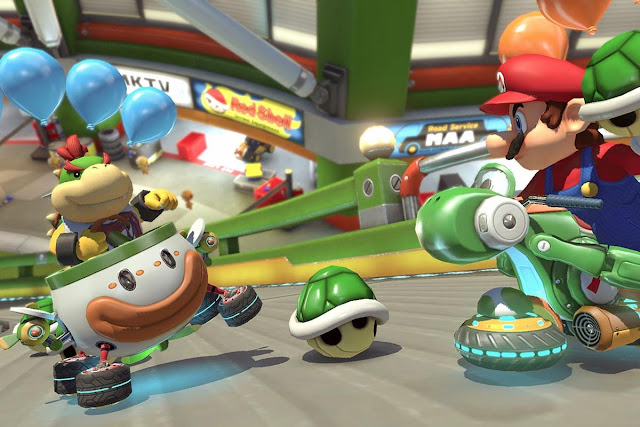 The best new feature is the revamped Battle Mode. Battle Mode is a mode that consists of several game types that don't have to do with racing, such as Balloon Battles and Coin Runners. In the deluxe version of Mario Kart 8, they added new games to Battle Mode. These include Bob-omb Blast, in which you try to blast as many people with walking bombs as possible, Renegade Roundup, which is basically like Cops and Robbers, and Shine Thief, in which whenever you are trying to steal the Shine from other players by hitting them with a power-up. This mode is lots of fun to play, especially in multiplayer. I love playing this mode with my friends using the Switch's sideways Joy-Cons for multiplayer. In multiplayer, up to four players can play using split-screen, or using 8 individual Switch systems in local play. Online play is also fun, and you can play with up to 12 players in this way.

It is a very fun game with lots of replay-ability. The game never truly ends, and even when you finish all the cups and tournaments in racing grand prix, then you can still continue to play wit with friends or with others online or locally. The anti-gravity mechanic makes room for lots of strategies. The visuals look shiny and new, and the track designs are creative and fun. The soundtrack is energetic, orchestrated jazz music that is really catchy (especially the title screen theme). However, the character roster suffers from too many baby versions of standard characters that drive really similar to their larger counterparts, so what was the point of adding all of them in anyways? In my opinion, Baby Mario, Baby Luigi, and Bowser Jr. are the only baby characters that were necessary to add because they are the most iconic of the light-weight characters. The new powerups were nice additions taht were often helpful but not too overpowered to achieve that perfect Mario Kart balance. The online experience is very minimal in this game. It really sucks that I can't invite friends into matches with me. You have to use some form of outside communication to communicate with them at all if you are lucky enough to be in the same match together. 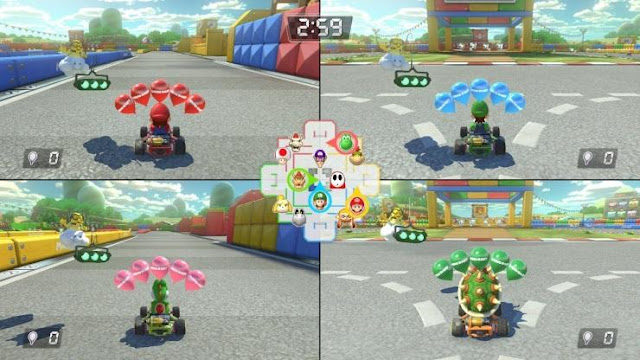 If you haven't played the Wii U version before (I haven't) then this is a must-have. If you have already played the original version before, then there are two reasons you may want to get this one too: the new souped-up battle mode, or the portability that the Nintendo Switch offers with games. Regardless of whether or not you played the original one or not, it is amazing being able to play a game like this whether you are at home or on the go. It is convenient to be able to play multiplayer with someone else without the need for another system. Right out of the box, the Switch already  has two individual Joy-Cons, so you and a friend are already set to race and battle each other whenever and wherever you want. It already was better than the original, but it also has the advantage when it comes to convenience. However, the only reason you wouldn't want to play this game is, if you don't care about battle mode or portability and already owned the Wii U version. Get it to have some fun with tons of friends, and also have fun alone.

Here is a list of all my Nintendo Switch game reviews: http://arcabaran.blogspot.com/p/all-my-nintendo-switch-game-reviews.html