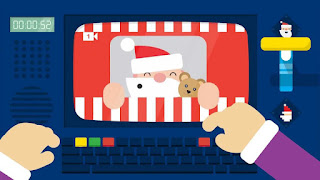 Every year since a few years back, Google has made a Santa Tracker where you can track Santa Claus's flight during Christmas Eve. It also had games and other activities that would be released each day of December, sorta like an advent calendar. You can still play those games now, but they won't last forever. Eventually, they will be removed from the homepage forever until new games are released. So here are some links to each of the days so that way they can be accessed later on. You're welcome!
Any of them with a star * next to them means that they are one of my favorites.

[This one is glitchy and doesn't work sometimes] Day 22- Memory Match: https://santatracker.google.com/matching.html

Day 24 would have the actual Santa Tracker if you were on the website that day.\

Other things that it had:

The Android App version of the Santa Tracker: https://play.google.com/store/apps/details?id=com.google.android.apps.santatracker

Phew! That was a lot to type. See you next time! BBYYYYYYYYEEE!!!