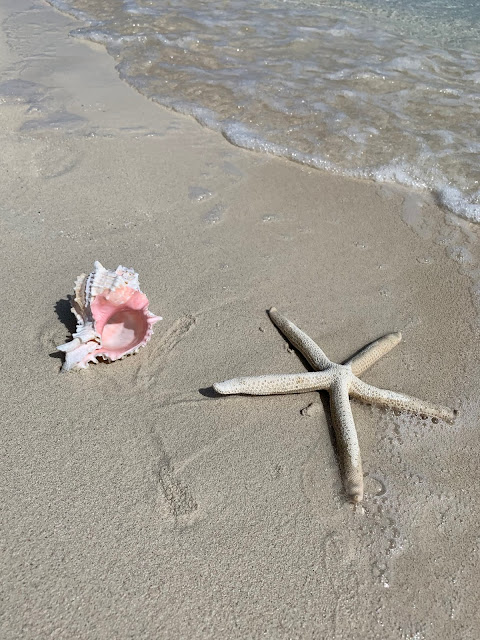 The skies are blue, the birds are singing, the flowers are blooming, and all the 12-year-old boys in America have secluded themselves indoors from dawn to dusk playing Fortnite... I'm no expert meteorologist, but I'm pretty sure that means that summer is here at last! Of course, the end of school and my graduation from middle school wasn't extremely recent; it only happened two weeks ago. The first week after summer, I was on vacation in the beautiful Turks and Caicos Islands!

We stayed in the Turks and Caicos for about a week, and since we're Turkish" I guess you could call us the "Turks in the Caicos". (ba-dum-tiss!) But about that name, in case you're wondering; Turks and Caicos doesn't have to do with the nation of Turkey. Rather, after doing some research, I can confirm that it has to do with a cactus. Let me explain.

Some of the plants native to the island include the cactus. One of these cactuses has a cylindrical red flower on top, which somewhat resembles a fez. So you know what people named the cactus? The Turk's Head cactus. Thus, when European settlers came across hundreds of these cactuses while exploring these islands, they thought it looked like an Ottoman army wearing fezes when viewed from afar. Thus, they named the plants and the island itself after the Turks, which doesn't really make sense from a practical standpoint since it would only get people to get confused with Turkey, but seeing as this name was from the same people who called the Caribbean "India", it's not very surprising.

In case you're wondering what we did while on the island, I can tell you that it was all about the beach. The Caribbean Sea was the sole highlight of the trip. The water is vast, shallow, blue, and calm; like a natural swimming pool except that it's salty, doesn't contain chlorine, and you could view sealife like small fish and stingrays through it. We didn't come across a single Turk's head cactus, for whatever reason. However, we did see conch shells and even ate conch meat.

The conch, along with the cactus, is another one of the mascots of TCI (no, not the online textbook, but the abbreviation for the Turks and Caicos Islands). Did conch taste good? Well, it depends on which restaurant you eat it from. We ate from a place called the Conch Shack once, and you'd think they'd at least have good conch since they're named after it, but it tasted somewhat rubbery and I wasn't too big of a fan. We ate from a restaurant that didn't even have conch in its name a day after and I thought it was very good. I would recommend that if you are even somewhat interested in trying out the conch, you should do it at least once. My recommendation is fried since it tastes like calamari this way.

Other things we did in Turks and Caicos, other than getting a massive tan, were checking out the underwater coral reefs. Like most recent vacations I've taken around the world, I recorded my adventures with my GoPro, which is this time a new GoPro Hero 7 Black I got first for my Italy trip back in April. Spoiler alert: I still haven't uploaded a YouTube video for that. And as for my top-secret Cancun Part 5 (yes that's a thing), Dominican Republic vlogs featuring Ege, and my Northeast road trip... all unfinished, you get the idea. But I am super glad to report that for the first time in two years since my Cancun vlogs on The AABO Show, I have finally created a brand new vacation vlog based on GoPro footage. You can view that below, or at this link: https://youtu.be/6aVeMtaFOpg


The video is called a "mini vlog" instead of a regular vlog since it is much shorter than the regular vlog length of upwards of ten minutes, and instead of being an in-depth look at all the footage, it's somewhat of a highlights reel I made with the GoPro Quik app. If you know about The AABO Show and its "highlight reels" or "sneak peeks", then this is basically a slightly longer version of that.

So you may be wondering, what's with the YouTube channel name change? It used to simply be called "Arca Baran", right? Why the change to "Arjay Meemz". Simply because I felt like it, and also since it's kinda boring to just use your real name for everything. Don't worry; if you search "Arca Baran" on YouTube I believe it's still the first result due to me putting it in the description of my channel. Also, the URL is still this: https://www.youtube.com/c/ArcaBaran

Okay, I think that I'm going to use the rest of my post to talk about multiple important things.

So, as you know, summer is here and I'm finally free from school. In the past, I usually tried to post daily, and that's exactly what I will try to do again this time. I can't gaurantee a post every single day, but a post every 2 days is more likely. It won't follow any specific schedule or anything like that, since I've tried that in the past and I know others who have, but it simply doesn't work in most cases.

So then, how on Earth are you guys supposed to know what comes next from my blog? At the end of each post, as usual, I will give vague hints or semi-confirmation as to what my next post might be about. And as usual, there will be that whole lovely copy and paste description thing at the end.

I will be in camp every single day this month except weekends, so I might try to post when I arrive home. Next month, I'm on vacation in Turkey, but at least then I'll have WiFi for two of the three weeks there. Stay tuned.

I recently watched plenty of movies which I might make a review of next. I started a Lego Movie 2 review after watching it on the plane, but finishing it at this point is somewhat unlikely. However, I fully intend on making posts to review both Toy Story 4 and Spider-Man: Far From Home, which I watched recently with my buddy Xiang. Maybe a collab of some sort?... Hey, it's all up to you, Xiang, my dude. Want to pitch in and write a paragraph or two of your opinion? I'd greatly appreciate it. I also want to finally write a Spider-Man: Into the Spider-Verse review, even though I'm more than a year late since I've already seen it 5 times and loved it each and every time.

I also plan on updating the layout of my blog slightly, mostly just fixing any format and color issues as well as maybe even a new logo. This might be the next "blog upgrade", but I don't guarantee I'll even number it at this point, but do expect at least some amount of change to how my blog looks soon. Dark mode maybe? (hint-hint, nudge-nudge)

That's about it for this post. I want to post daily, and in order to achieve that, my posts might start getting a bit shorter than what you are used to from me (AKA super long and unfocused essays), which I'm afraid might already be this post. Alright, now on to the new description!:

That’s it for this post! Thanks for reading it, and be sure to share it with others if you liked it. All this month, I will attempt to post daily, so stay tuned. My next post might be a review of the animated movie Spider-Man: Into the Spider-Verse. My blog is currently at 146.2K views, but my goal is to reach 150k before the end of this month. Click that “subscribe” button at the top of this site if you want to receive email notifications to be the first person to know when I make a new post! You could also bookmark this page to your browser if you want an easy way to visit my blog every day.

Here’s my previous post, about E3 2019 predictions (yeah it's old): http://www.arcabaran.com/2019/06/nintendo-direct-e3-2019-what-to-expect.html
Check out my YouTube channel, “Δrjay Meemz”, where I sometimes post vlogs and funny edits. I’ve got vlogs in the works for my recent trip across Italy, as well as for my Dominican Republic vacation with my pal Ege, and much more. Be sure to subscribe to find out when I make new videos. Here it is: https://www.youtube.com/c/ArcaBaran

“The Way of Wakanda” is a brand-new blog run by my little brother, Onur. He posts humorous and short stuff every day during summer as well, and it’s all about video games, pop culture, and his life. In other words, it’s similar to my blog, so I think you guys should check it out: https://omegaonix.blogspot.com/

“Burak’s Blog” is by my friend Burak from The AABO Show, and he posts very frequently about tech reviews and other news. Here it is: http://biloglu.blogspot.com/

See you  next time! This is Arca, signing off.