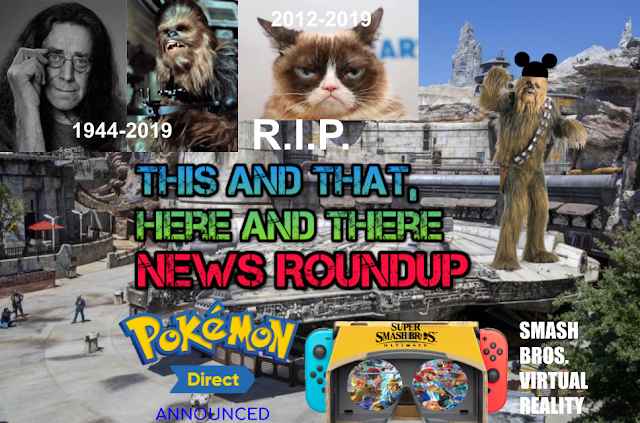 Hello, everyone! I haven't been posting very frequently, and lots of interesting stuff has happened recently. Now that it is officially the start of June (meaning that there are only about 20 more days until my school ends), I decided to drop a massive News Roundup post so that I could catch up on what I missed. We've got lots to talk about today, from celebrity deaths and birthdays to Star Wars theme parks and what Nintendo's been up to recently. So, without further ado, let's get RIIIIIIIIGHHHHT into the neeeeewwwwssssssss!!!!! The first batch of news is sad, unfortunately.

Peter Mayhew, the Chewbacca actor, has passed away :'( 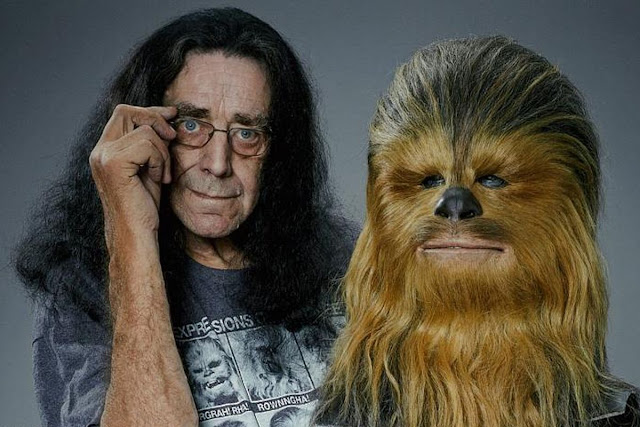 On April 30, 2019, Peter Mayhew died at the age of 75. He was best known for his role in most of the Star Wars films as the lovable wookie partner of Han Solo, Chewbacca. He warmed audience hearts all around the globe with his heartfelt depiction of the gentle giant, and his absence will long be felt in the hearts of fans everywhere. Outside of portraying Chewbacca, he founded the charity organization in his namesake, the Peter Mayhew Foundation, which helps children and adults who have experienced trauma and disease. Mayhew may have unfortunately passed away, but as Luke Skywalker says in The Rise of Skywalker's new trailer, "No one's ever really gone." His presence will forever be felt and preserved through the lives he has touched and affected, the children in need he has helped, and the performance in four decades worth of films that brings smiles to everyone's face. He had already retired from playing the role since playing Chewie in 2015's The Force Awakens, where he mentored the also crazy-tall actor Joonas Suotamo to fill in his place for the role. He was given many heartfelt tributes by the likes of Harrison Ford, Mark Hamill, and his mentoree Joonas Suotamo. Even NASA made a tribute for him by displaying his photograph on the International Space Station for a day. The Force will be with him. Always... 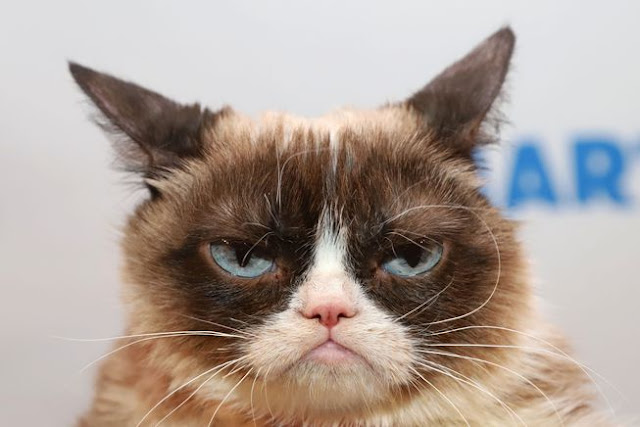 This isn't the first time I've made a post about the passing away of a living meme legend. Stefan Karl Stefansson (AKA Robbie Rotten) died of cancer last year, and I made a post in his honor. On May 14, 2019, the feline named Tartar Sauce, known to the world as "Grumpy Cat", died of a UTI. She was 7 years old at the time, and held the world record for being the world's most grouchy kitten--- I mean, look at her face! The reason that Tartar Sauce looked so grumpy all the time wasn't because she actually was (she was actually quite happy in real life, according to her owners). She had something known as "feline dwarfism", which basically meant that the shape of her bones and jaw made her always appear disgruntled. Of course, when the Internet found out about this, they had a meme hay-day out of it, and countless memes and videos were made. She became an Internet celebrity that made people smile just by frowning and being captioned with things like, "Go away," or my personal favorite: "I had fun once. It was awful." She will live on forever through her enthusiastic fans and the gold mine of memes she spawned. 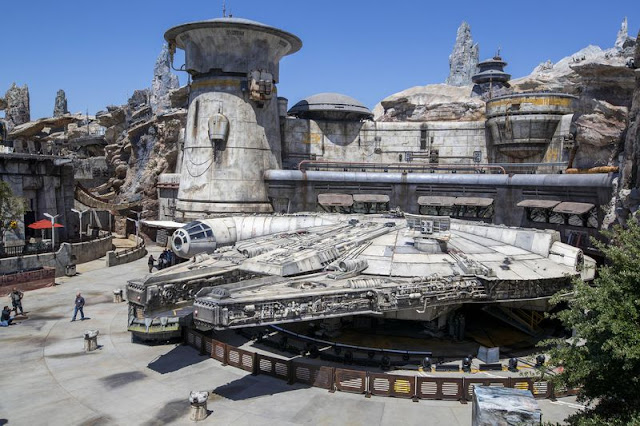 This is something that many fans have been waiting for, ever since Disney's purchase of Star Wars nearly 7 years ago. The opportunity to combine Lucasfilm's skill at making cinematic worlds and Disney's ability to make real-life theme park worlds was obviously a genius one and I'm beyond ecstatic that they actually went ahead and created one! It is called Star Wars: Galaxy's Edge, and it opened in Disneyland California on Friday. Fortunately for east-coast dwellers like me, however, it will also arrive at Disney World Florida in a few months (at least its a few less thousand miles away). This park probably shatters your expectations in many ways.

First, this is a brand new, completely separate park from the rest of Disney. That's right; it isn't just randomly incorporated into a pre-existing park; Disney went all out and built an absolutely massive 14-acre park dedicated entirely to Star Wars! It isn't "about Star Wars". It IS Star Wars itself! The theme park takes place on the planet Batuu, a real planet in Star Wars lore, and after the events of Episode VII: The Last Jedi. Thus, everything in the park was built to feel like you are in a Star Wars film. The staff are all decked out in Stormtrooper uniforms and regularly ask you for identification, please. Astromech droids roam the streets. Alien waiters serve restaurants and work at shops. The Disney "magic" is all very effective here.

The decorations and buildings all have sci-fi inspired architectures and vibes to them, and you even get to have Star Wars themed food. Blue milk? You can drink it. Or would you prefer old man Luke's space cow green milk? Go ahead. Bantha meat? Ewww, but that's probably an option. There is a droid workshop where you get to customize and build your very own life-sized, working astromech droid or BB-unit, and probably my personal most exciting workshop, the lightsaber workshop! Yes, this isn't the first time you could build lightsabers at Disney. But this is probably the best of all of them. While pricey ($199, that's 66% of a Nintendo Switch), they are made of actual metal and are far from plastic pieces of junk you can find elsewhere. You get to choose a kyber crystal color that matches your personality, as well as mix and match the styles of famous Star Wars Jedi and Sith lightsabers to build your own. This is in addition to a growing amount of Star Wars themed rides.

But the best part of it all? It's a nerd's dream come true; you get the actually pilot the Millenium Falcon! This ain't your ordinary Star Tours ride, kid. The massive Millenium Falcon replica at the center of the park isn't just the best ride, it's a videogame! Up to five people get to choose roles of engineers, gunners, or pilots to contribute to an interactive game where every experience will be different! I sure won't be able to go to Galaxy's Edge soon; at the moment it will be very crowded and expensive and hard to get into so close to launch. But a year or two later, and I may finally get to walk into geek heaven. 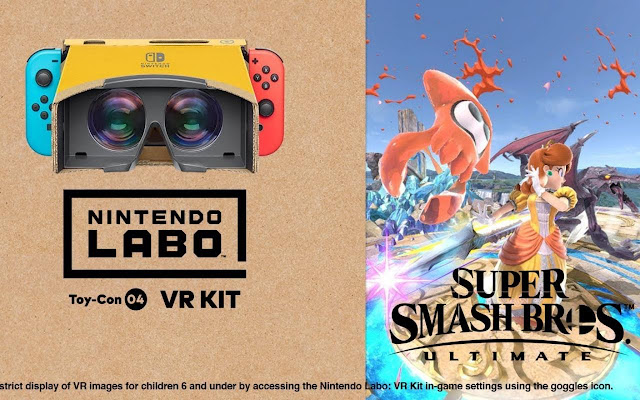 Nintendo has got to be the weirdest company on the planet. Often that's a good thing. Other times that's a bad thing. But I'm not sure how I feel about this: They have recently added an update to Super Smash Bros. Ultimate that will let you use the Nintendo Labo cardboard virtual reality goggles in a dedicated game mode. No, this isn't a first person point of view mode, if you were hoping for that, unfortunately. Instead, its just regular one-player Smash battles where you get to swivel your head to change the camera angles and take in the fantastic sights of the 3D stage all around you. I haven't tried this out yet, due to not owning the Labo VR goggles (but I might try them out at some point in the future). But reactions have been mixed. While it is conceptually cool that all three of the best Switch games have this feature (first with Breath of the Wild, then Super Mario Odyssey, and now this), apparently the graphical quality leaves much to be desired. In addition, I don't think it would be so easy to be engaged in an intense battle, but you have to constantly turn your head whenever your opponent gets out of sight. It's a nauseating idea, in my opinion. But hey, anyone who has actually tried this out for themselves, can you sound off in the comments telling me what you think? Is it worth it? Is it cool? Or is it dizzying? I'd love to hear what you guys think. 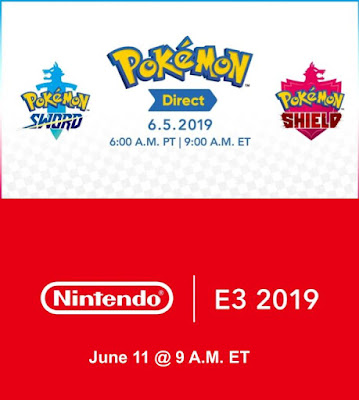 Following the recent Super Mario Maker 2 Direct, Nintendo has started following the pattern of seemingly dedicating entire directs ahead of E3 to things that we thought they would focus on at the convention instead. This pattern continues with Pokemon Sword and Shield, which is probably the last Nintendo Direct before the big one at E3 2019. A Pokemon Direct has been confirmed to happen on this Wednesday, June 5. It will go live at 6 AM Pacific Time (Japan), but for most of you along with me on the East Coast of the U.S. (starting at NYC), that means that it will be uploaded at 9 AM for us. But the biggest thing to look out for will be the following week's E3 2019 press conference, where a Nintendo Direct focused on brand new game announcements for this year and beyond will air at 9 AM eastern time on June 11, followed by a days-long Nintendo Treehouse exhibition with demoes for new games. For gaming fans, it's basically Christmas. Expect to see me make another E3 predictions post for this year, just like how I did for E3 2018, that tries to predict what will (and won't) happen at the Nintendo Direct. Just don't expect me to be accurate at all if my last time's accuracy rate is to remain the same.

I hope you enjoyed this news post! If you found this to be interesting or informative, please share it with others. Stay tuned to my blog for new posts, as now since summer is approaching I will have much more free time due to receiving less homework. My next guaranteed post will be this upcoming Saturday or Sunday, which will probably be an E3 2019 predictions list that focuses mostly on Nintendo. If I'm lucky, I might have time for one miscellaneous post during the weekdays.