I only watch American football once a year. That's on Super Bowl Sunday. I am not super familiar with football, but I still find grown men giving each other brain damage to try to get touchdowns somewhat entertaining. However, I wasn't there for just the game, of course. I was there for all the "extra noise". But this year's Super Bowl simply felt... off.

Many people said that the game itself was boring and uneventful. I only watched half of it, but I do distinctly remember that at least an hour of it was spent without a single score. It remained zero-to-zero until the Boston Patriots got a three. I predicted they would win (I wasn't truly rooting for anyone, in particular, this year), and I was right. I woke up the next morning, and it was a victory of 13-to-3. So while they did beat the LA Rams, it probably wasn't a very exciting game. Only one touchdown was scored the entire time. Sure enough, it happened to be the lowest scoring Super Bowl in history. So no wonder that everyone (even my science teacher) was talking about how boring it was the next day. The Patriots won for the billionth time? Woohoo. Thanos---I mean, Tom Brady, did it, I guess. 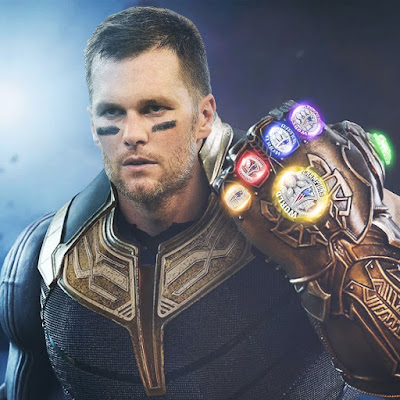 But even for what I was actually watching for, it was somewhat underwhelming. Like any non-football fan, I was mostly there for the commercials. Why? Well, the Super Bowl is a very special annual event. Millions of people from all over America tune into it every single year. That is why advertising spots are at an all-time high in terms of cost. A single ten-second advert can cost millions of dollars to purchase! That is why the companies that shell out this money to advertise usually make them extra-special and interesting. They are typically more original and fun to watch, since they want to be able to get more publicity and public attention. Xiang was talking about this one commercial I didn't see, for some sort of laundry detergent, in which some elderly guy was dancing in the shower. My favorite commercial in the Super Bowl would be last year, which is an M&M commercial where my idol, Danny Devito himself, turns into a human M&M. He also gets run over by a bus and asks people on the street, "Do you wanna eat me?" If you haven't watched it yet, you're missing out, so I suggest that you watch it below.

This time, though? Most of the commercials weren't super memorable. Some of the few that I were awake to enjoy were the movie trailers for Avengers: Endgame and Captain Marvel. Oh, and the Pringles ad where Alexa complains about being a cold, cruel metal device without a soul, until she gets interruped by a request to play "Funky Town". Apparently, all of the good stuff appeared after the Halftime Show. When I was asleep. Some examples of stuff that I missed out on were an Amazon commercial with Harrison Ford, a Toy Story 4 trailer, and a tear-inducing ad for Xbox's Adaptive Controller (made for people with disabilities).

But the part of the entire Super Bowl that got people talking the most would almost definitely the Halftime Show. I was actually looking forward to it, ever since I heard about it weeks earlier. And no, I didn't care about Maroon 5. Or Travis Scott. Or whoever else was performing. I was excited about the fact that there would be a tribute to Spongebob Squarepants in it. In case you didn't know, the creator of the cartoon, Stephen Hillenburg, passed away last November due to ALS. So, in his honor, fans put up a Change.org petition asking for organizers of the NFL event to play the song "Sweet Victory". This was a song that was played in an episode of the show, which was a parody of the real-life Super Bowl Halftime Show, back in the 2001 episode "Band Geeks". You can watch the episode clip below: https://www.youtube.com/watch?v=k9iYm9PEAHg

Things were looking good for the petition. It got over 1.2 million signatures. Both the NFL and Maroon 5 tweeted hints that they would fulfill the promise. And around came the week of the Super Bowl, and the voice actor for Squidward confirmed he was involved. So during the Halftime Show, lots of people were at first overjoyed at seeing the appearance of Spongebob in his friends, decked out in their band performing outfits, and the trumpet fanfare began!... for a solid five seconds. Then, it was interrupted by Sicko Mode, and the moans of disappointed fans could be heard everywhere. You can see exactly what happened here: https://www.youtube.com/watch?v=Ei-ZL1_jfWo

Fans had mixed reactions to this. While overall the reaction was negative, some felt grateful that we got any clip of Spongebob to begin with. Even if it was just a few seconds, it was still a tribute to Stephen Hillenburg. However, others pointed out that it wasn't "Sweet Victory" like what was promised, and that it just seemed like the fans had gotten baited into watching it. I am somewhat a mix of these two views. While I love the fact that there was a Hillenburg tribute in any way, shape, or form, I still think that it wouldn't have been too difficult to make it longer. What, was it too much to choreograph an entire extra song for Maroon 5? They could have just literally played the two-minute song clip from the episode, and we would have been somewhat happier.

Even Nickelodeon seemed to be upset, since the day after everything was said and done, they tweeted this totally non-salty tweet:

It's either that they are biased, or they are correct. I'm leaning toward the latter.

Well, while I certainly am somewhat disappointed (and amused at the same time), I figure I may show you what should have actually happened. What the Super Bowl LII Halftime Show was supposed to look like, but didn't. Unfortunately, I currently have neither the skill or the editing software required to make that happen. But a YouTuber by the name of "yeek." apparently did, and his video garnered over 2.2 million views in the span of just five days! I highly reccomend you watch it if you, too, are salty about the Super Bowl show: https://www.youtube.com/watch?v=U0zMAEx1o7I

Now that, my friends, would have been amazing. But instead we got Adam Levine and Travis Scott rapping "Sicko Mode". Sigh... One day, my friends. One day. I'm actually quite looking forward to the inevitable Mandela Effect that this will cause, years down the line. This is exactly how this year's Super Bowl was meant to be remembered, but unfortunately, this post already serves as a debunker for any sort of wishful thinking.

If it makes you feel any better, just watch the Otamatone cover of "Sweet Victory", created by the highly talented YouTuber TheRealSullyG. I think his content is somewhat underatted. He puts lots of effort into them, and the songs he chooses are either old songs or meme songs. He even dresses up the gosh darn instruments... I never knew an instrument could be so adorable!
https://www.youtube.com/watch?v=u9rj5s-nDvw 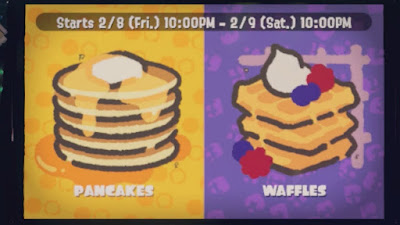 Speaking of super-competitive sports competitions that appeal to young people... There's a new Splatfest for this weekend only in Splatoon 2! Pancakes v.s. waffles, huh? I'm more of a waffles person. Waffles are like the Swiss Army Knife of breakfast food... They not only hold toppings well, but they taste delicious! Sorry, mushy pancakes, but #TeamWaffle all the way!

This is Arca, signing off for now. I haven't posted in a long time, I know, but that's because I was super busy. But that business is now over. Expect a full explanation of what to expect next from my blog (and oh boy, you guys are in for a treat that's better than waffles) in one of my next posts, coming as soon as possible. Trust me, my blog is far from dead. It's in a state of revival.