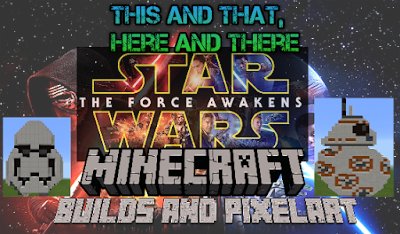 Hello, guys! This is my second post today. I decided to do something about Minecraft. Since earlier today I had made a post showing some Angry Birds Star Wars fanart I decided to showcase some more of my Star Wars fan creations. Using Minecraft Pocket Edition, I built a 3D First-Order Stormtrooper helmet and a BB-8 pixel art. (Coincidentally, these are the same characters that I did a fanart on earlier today,) Please note that I was using the new update 0.15.0, which I will try to do a post on either tomorrow or Sunday. Without further ado, let me show you my builds! 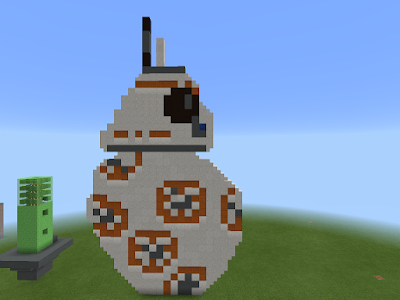 As you can see above, I made a BB-8 pixel art. I referenced my BB-8 toys and some pictures I found online of the actual BB-8. It tried my best to make a smooth circle shape, but as you can see, I failed a bit since the left side is kinda lumpy. I did individual orange circles with rectangles inside and little grey bits. I filled in most of the remaining inside with different types of quartz blocks, which gave it a white color. If you look very closely at your screen, you will see that  between the circles you see blocks of a different shade of white with a different texture. This was supposed to be like the plates connecting BB-8's sphere body.

The head is kind of like a semi-circle or trapezoid. On the head, I made a big black eye, with a bit of grey inside to show the light reflecting. Next to that you will see grey and a bit of blue (lapis lazuli block), for the light thing on BB-8. Near the bottom of the head are a few orange bits and a grey bottom. I made two antennas on top, one of which was only white, and the other that was black with grey in the centre. I used white quartz stairs and placed them on any round parts of BB-8 to make it look even rounder around the edges. 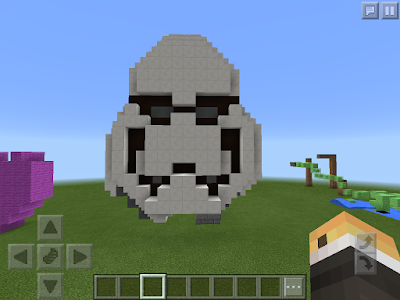 I also made a slightly 3-D pixelart/build of a First Order Stormtrooper helmet. I made an oval base from quartz blocks to give it its white color, then put some stone stairs underneath it to make some round gray bits. The mouth is round and shaped like (parenthesis) on both sides, and has a bottom like the lowercase letter "w". The mouth connects to the crooked semicircle eyes. Between the lines of the mouth, the nose bit is bulging out at a one-block width. Inside the eyes are grey bits for the goggles reflection. On top of the eyes is a shaped like half an egg. Just like last time, I used a variety of stairs in different places to make parts of it look rounder. This is a building tip that I highly recommend. It is 3 blocks in width if you stood next to it and looked at its side. The center block (or median block, if you like math terms) is bulging out on the sides.

I hope you liked this post, take a moment to vote on a Google+ poll about what Minecraft PE builds I should make next. The two options that receive the most votes by Sunday are the ones that I will make and show to you guys! Don't worry if the option you wanted doesn't get picked, I will put the remaining one in the next poll, as well as add new options. Here is the poll: https://plus.google.com/117393279606783131402/posts/8EqbwYzo51a

Here is my previous post, for today, in case you missed it:
http://arcabaran.blogspot.com/2016/06/angry-birds-star-wars-force-awakens.html
It was about Angry Birds Star Wars fanart of a First Order Stormtrooper and BB-8.

I hope you enjoyed this post. Share it on Google+ if you did, tell your friends, and view daily as I make 2 posts a day during summer vacation. Help me reach 15 thousand views! BBYYYYEEEEEEEEEE!!!