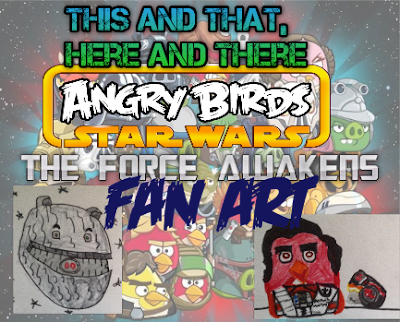 Hi, this is Arca. I know that I haven't posted in over 3 days, and that is since I go to summer camp. Instead of doing 2 posts a day, I will usually just stick to one post every day. Anyways, according to the last poll, the two things you wanted me to draw were Angry Birds Star Wars versions of Poe Dameron and Starkiller Base. (The "Other" section was also tied, but somebody responded "moo" which is not a Star Wars character, so that wasn't counted.) Also, I would like to give a shoutout to my camp counselor Josh for wanting to check out my blog and also for being very nice. Anyways, let's get into the post! 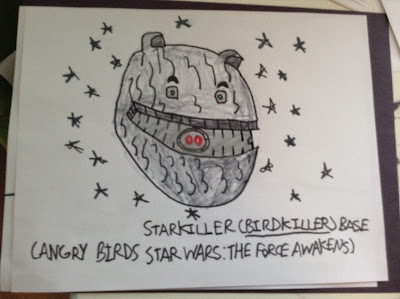 As shown above, the Starkiller base I made resembles a pig. It has piggy ears, tiny eyes, and a snout in between. In the movie, Starkiller base is seen with a crack-like trench through the side. In the middle of the trench is the snout. The nostrils are glowing red, and that is where the laser can fire. The entire thing is shaped like a sphere and is grey with some lines. There are stars in the background since it is floating in space. It nicknamed it "Birdkiller Base" as you saw on the Google+ poll. 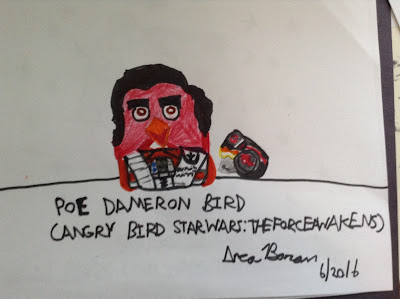 You can see above that Poe Dameron bird is red with a triangular orange beak. His hair is black and he has the same hairstyle as he does in the movie. His eyes are hazelish-brown, too. His suit has a Rebellion insignia on it and is mostly orange and white. In the center, there is a life preserver unit. I added in his special helmet next to him. I know I kind of made a proportional mistake since there is no way he would be able to wear a tiny helmet like that.

I hope you liked this post! Take a moment to vote on a Google+ survey about what ABSW fanart I should draw to show on my blog next. The two options that receive the most votes by Thursday at 4:00 PM are the ones that I will make and show to you guys! Don't worry if the option you wanted doesn't get picked, I will put the remaining one in the next poll, as well as add new options. Here is the poll: https://plus.google.com/117393279606783131402/posts/4ApuVSHSvPY

Here is my previous post, from Tuesday that was a Minecraft PE build of Kylo Ren's mask and a water bottle pixel art:
http://arcabaran.blogspot.com/2016/06/minecraft-pocket-edition-pixel-art.html

I hope you enjoyed. Thanks for reading this. Stay tuned for another post tomorrow, and a post every day of the summer. I will see you next time. BBYYYYEEEEEEEEEE!!!!