How I had a VIRTUAL 16th BIRTHDAY PARTY! (feat. Joonas Suotamo AKA Chewbacca himself!!!) 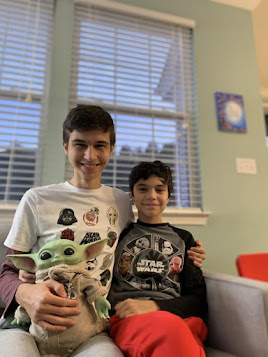 Hello, everyone, this is Arca. It's been a while, but yesterday I celebrated my 16th birthday! Obviously I wasn't able to go see a movie with my friends after going to a restaurant for dinner as I usually do, but I devised a fun way to make up for it with Discord. Discord has both text chat, audio and video features, and features a way to stream one's screen to multiple people at once... so in other words, it was perfect for a virtual movie-watching party! If you said that no new Star Wars movie was releasing this year, well, luckily, you'd be incorrect. The LEGO Star Wars Holiday Special was a short 45-minute movie on Disney+ that released last month, but I held off on watching the pseudo-time travel/Christmas movie parody until my birthday party!
So, to start from the beginning of the day, I woke up, ate some pancakes, and then was greeted with a surprise! I had gotten a birthday wish from the person who plays my favorite Star Wars (and possibly fiction in general) character of all time, Chewie! Joonas Suotamo has carried on the legacy of the late Peter Mayhew as the walking carpet for the past half a decade. Here he is giving me a happy birthday wish!: https://www.youtube.com/watch?v=JODobtAn_Q0&t=5s
This caught me completely by surprise. I saw the name Joonas Suotamo on the screen, and then instantly recognized who he was since I am a big Star Wars fan (shocker, I know)! That was an awesome start to an awesome day, and something I'll never forget.
Before my party, I then played some online co-op duels in Star Wars Battlefront II with my awesome pal Ege for a bit. In order to accomodate Ege, who moved to Istanbul over the summer, and was now in a timezone 8 hours ahead from me in New Jersey, we had the party start near 1 PM EST (or 9 PM TRT). I streamed the movie, and it was pretty simple and short but had some funny moments poking fun at the saga and was decently fun to watch without being a massive investment like an episodic film installment would be. 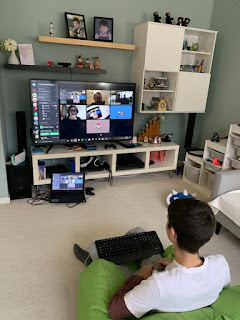 I have some footage from my interesting living room setup where I had plugged an HDMI cable into my laptop to get both the video and audio to come through our TV set. I used a bluetooth mouse and keyboard to sit on my bean bag chair and control my computer from afar, and I used my phone to mute and unmute myself on Discord to join in on my friends' live discussions (which ranged from anime debates, Star Wars movie opinions, and reactions to the movie we were watching) at any time. It was the closest thing I could've gotten to watching a movie with them in a movie theater, and I was extremely happy to see that my planning and work to get it to work well and invite people in advance had worked out!
This was the animated Discord server icon and also temporary profile photo that my friend Burak helped me make!:

After that, we played Among Us in the same Discord server for a few hours and had a blast. I'm not the best at the game, and I don't typically have much of a strategy while playing. Onur, on the other hand, ponders carefully about his tactics beforehand and masterfully acts as a detective during our emergency meetings. With Ali, Burak, Xiang, and more, we had a total of 10 people playing at once most of the time, and it was extremely fun!
You can see a highlights reel featuring photo and video here: https://www.youtube.com/watch?v=GoZkhCyxyZ8
Or, you can check out the full collection of footage we have here, on The AABO Show: https://www.youtube.com/watch?v=w4vLerqT5nk&feature=youtu.be
My brother and parents had gotten me a plush of Grogu---I mean, Baby Yoda from The Mandalorian (which had an awesome 7th episode of Season 2 the Friday before my birthday!!). You can see a photo of it with Onur and I at the top of this post.
Speaking of celebrities (but not as much so idols), even Tom Nook wished me a happy birthday!: 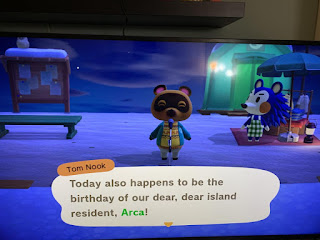 Here's the ice cream cake I got from Coldstone (with my own Yoda decoration, of course)!: 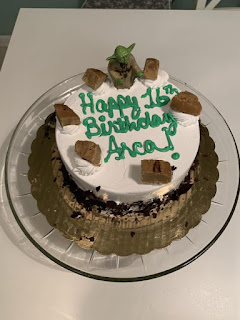 And here's the cake that my best friend Young surprised me with and baked himself!: 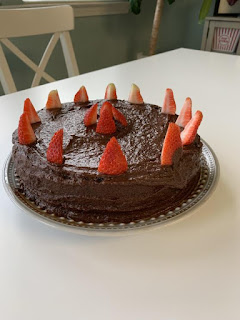 Here's a picture of most of the people in my Discord birthday party with their video on (online teachers would be proud)!: 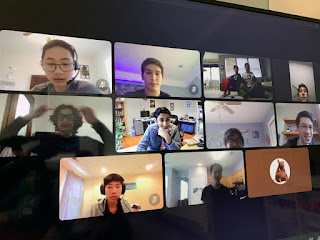 Here's a picture that's a blast to the past... long ago!: 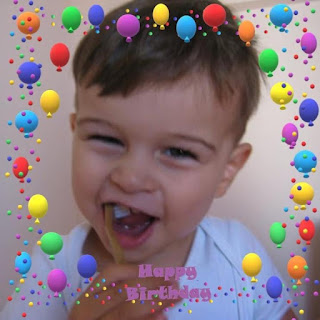 This year was the first year in a while that my birthday was actually on a Saturday, and also the earliest I've had my birthday party in a while. Last year, due to a ski trip, I ended up having my birthday party 15 days after my actual 15th birthday party, and had to avoid The Rise of Skywalker spoilers for several weeks! Two days before my birthday, the annual Game Awards happened and Nintendo had a cool Smash cinematic reveal trailer, a new Among Us map was shown, and a new Fall Guys Season 3 trailer premiered. Reggie was apparently even in attendance, but I didn't get to see him live or see any clips of him yet. I do recall that at the start, they showed all the special guests on a Zoom call and the legend himself had his camera turned off so I could see his profile photo (a picture of his face, that's right, the legend himself) and squealed with happiness.
So overall, my birthday was perfect under the circumstances. That's about it for this post. Be sure to stay tuned for more posts. I do want to post more than I have been recently, about various topics like my opinion on the PS5 console launch, the new Mandalorian season, and the massive issue with scalping bots online at the moment (trust me, I know what it's like... I can't find a gosh darn VR head strap in stock that's not multiple times the price on eBay just because a shopping bot publicly posted on GitHub and likely created by a teenager younger than I am has an easier time getting through a reCaptcha than real humans do). My winter break is right around the corner, and I also am trying to get better at time management, so I'd say there's a decent chance you'll at least see a bit more of my blog soon. Speaking of which, Joonas Suotamo complimented me on my blog... wow. Anyways, bye for now! May the Force be with you, and happy, safe holidays to all! Or as Chewie would say, "RRRRGGGGHHH!"