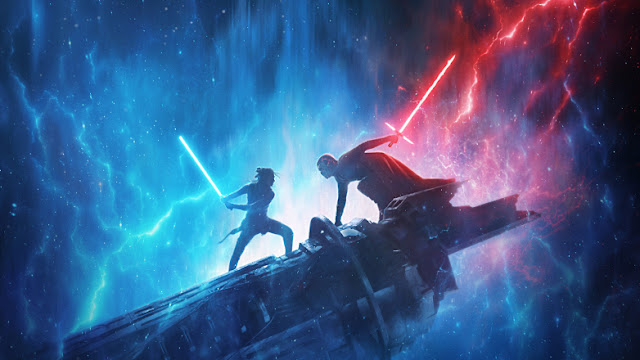 So, to start, this film had four distinct purposes, as the film's director J.J. Abrams once put it: one, to conclude the saga, two, to conclude the sequel trilogy, three, to be a sequel to The Last Jedi, and four, to be its own stand-alone thing. Let me rank those tasks in order of best-accomplished to worst, then explain them, all as part of this mini-review. That would be two, one, three, four. It accomplishes tasks 2 and 1 nearly just as well, yet struggles with 3 and 4.

For task 1: Does it really successfully put a bow on the Skywalker Saga? I'd say, due to the nature of its ending, mostly yes. I don't want to get into spoiler territory here, but Abrams has crafted a movie that successfully references and completes arcs from all three trilogies at once, and the ending feels, well, final. It has all the George Lucas "it rhymes" poetry, with the exception of a few startling choices made. Leia's goodbye was well-done considering the circumstances. Lando's presence was great. I do think that there may have been too many jokes at Threepio's expense, but it wasn't all terrible.

Task 2: Does it conclude the sequel trilogy? Undoubtedly, and in fact, better than concluding the Skywalker Saga. Its ending still feels somewhat loose to the point that they could, if they really wanted to, bring in some of the same elements decades later and make an "Episode X" if you will, but not consider it part of the Skywalker Saga. All of the three protagonists, that being Rey, Finn, and Poe, are given a conclusion to their arc in some way. Seeing them all together on-screen for the last time truly does bring emotions somewhat close to the original trilogy trio, and it should have happened much earlier in the trilogy if I'm being honest. Kylo Ren also is probably the best thing about this movie, and he steals most of the scenes that he is in, even if he doesn't get enough dialogue in the second half.

Task 3: A sequel to The Last Jedi. Now, this is where most of my problems with the film lie. Parts of it, as you probably have heard on the Internet by now, feels like a reaction to a very vocal group of the fanbase's whining about Rian Johnson's film rather than a natural continuation of it. Now, I wouldn't say necessarily "retcon", since that would suggest that things get outright ignored, but I will say that it is more of repurposing of what was previously said, if you will, to suit the intentions of J.J. Abrams rather than the TLJ creator. You don't really have to have seen Episode VII to understand most of this movie since it just appears to gloss over that exceptional movie as if it was nothing. Which, hate it or love it, its story decisions certainly were not.

Lastly, task 4: Is it a stand-alone film worthy of watching for the general person, or as an introduction to Star Wars? I'd say yes, even though it completes this task the least well due to its frantic pace and constant confusing plot points. To my friends who were watching it with me who hadn't seen TLJ, they might have felt like they missed out too much on the last one's plot. One of them asked me afterward, "What happened in the last one?" To which I replied, "Look it up, this one doesn't rely on that one too much." Overall, it feels like it definitely could have benefitted from a longer run-time to really let audiences process what important events are happening without gliding through and past them at lightspeed.

So, overall, what's my consensus about this movie? I originally walked out thinking it could very well be my favorite one... which was a result of hype. After thinking about it some more, I became quite conflicted as to whether I liked it more or less than TLJ. The quality of the film, technically speaking, was still phenomenal. Great acting, great score by John Williams (which is his last one for a Star Wars movie, by the way), wacky and memorable characters (except for that one space slug thingy... weird) including Babu Frik, who everybody loves... you get the idea. You can really tell that all these actors are giving it their all with what they've got, and since this the last huzzah for their involvement with the franchise for many of them, it's quite commendable. Kylo Ren and Rey were great, the humor wasn't as good as TLJ's, and sometimes a bit self-deprecating, and the certain baddie's involvement with the film seems out of nowhere but then again, read the books I guess? The film's first half really hooked you in at frantic speed, the second half was pretty decent for Rey/Kylo's character development, and the final battle wasn't bad at all. The ending is still mysterious yet seems like a fitting ending. It seems I've exhausted ideas for this mini-review, so how about you tune in sometime soon for a possible collab post as a full (maybe with spoilers) review of the film.

Should you watch this film? Absolutely. Even if you didn't like the previous new ones, it's basically your duty as a fan to see how it pans out yourself. If you loved the sequel trilogy, like I did, you'll definitely be happy and probably overjoyed to see this. It's a deeply-flawed finale that we didn't entirely deserve, but some people wanted it this way. Some characters didn't get enough, some characters got maybe too much, but it was fun and exciting nonetheless. My current rating for this movie out of 100 would be a 90. I have spoken.

Oh, and while you're at it, watch this YouTube vlog on The AABO Show for my 15th birthday party, where I first watched this movie! I normally wouldn't feel the need to promote it here, but ever since COPPA took away all "kids" channels' subscription notifications, a lot of people will not know about new videos of ours anymore (dumb, I know), and thus they'll be getting a lot fewer views without my blog's help. I edited this one entirely, and I think its quite fun and better than all my previous birthday vlogs for myself. Subscribe and like while you're at it, too, so maybe the chances of it showing up in one of our friend's recommended will actually be higher (thanks, YouTube/COPPA). Here's the link if for some reason you can't view it below: https://youtu.be/a_yv9w6csCo

That's it for now! See you guys later, and may The Maclunkey Force be with you.